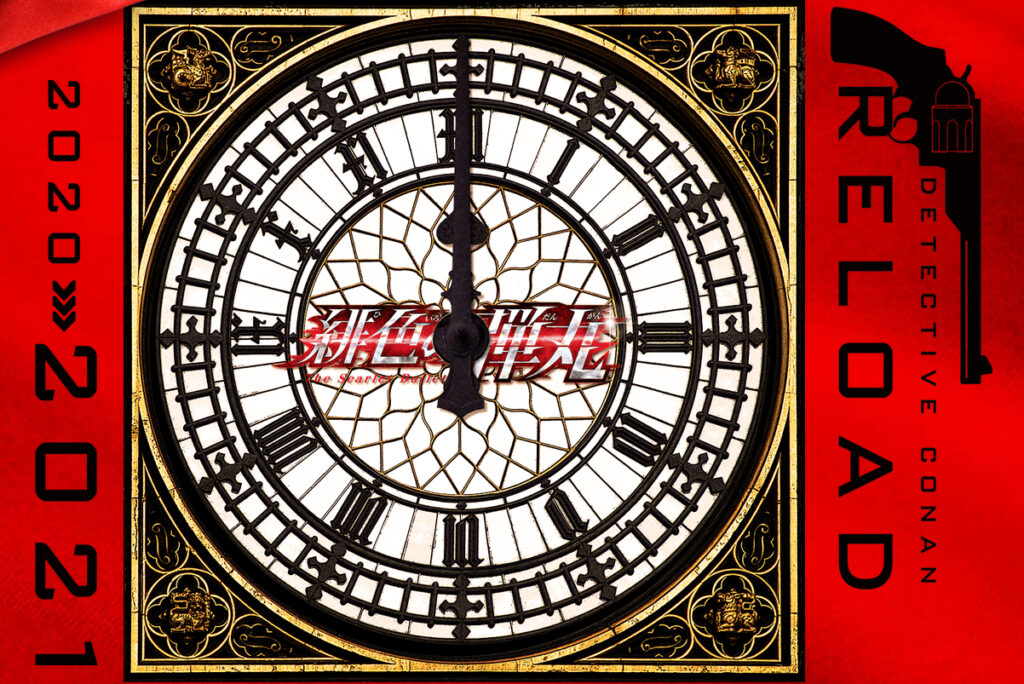 Almost a year after it was scheduled for release, Detective Conan: The Scarlet Bullet will finally arrive in Japanese movie theaters on 16 April 2021.

On Tuesday, Toho released several promo videos on YouTube for the long-delayed anime movie. One of the promos features something called Reload Project.

Appropriately for an anime series about a mystery-solving boy detective, Toho is keeping the exact nature of Reload Project mysterious for now.  As of Tuesday, a special webpage for the project states that ‘twelve special promotions will be released.’ It adds that details about ‘the new project wrapped in mystery’ will be shared on the film’s website, as well as on Twitter.

This fits together with the new promo video for Detective Conan: The Scarlet Bullet. The video symbolically dramatizes the film’s COVID-19 delay; a clock’s hand moves toward 12 before turning back to 11. The promo also features the 23 previous Conan movie titles, while twelve bullets are loaded into a revolver. The final bullet is clearly labeled Zero the Enforcer (Zero no Shikkounin), the 22nd Conan film.

If you want to preview actual scenes from the movie, watch one of the other trailers that Toho released on Tuesday. (We embedded the longer version below. Here’s a link to the 30-second version.)

Ironically, if the film had gone forward, it would have included a scene from the 2020 Tokyo Olympics, which was also delayed.

Elsewhere on the website, Conan Edogawa’s voice actor, Minami Takayama, apologized for the delay in the film. ‘To be honest, it was heavy damage,’ she states. ‘However, I changed my mind to wait for the dangerous waves to pass with everyone who is looking forward to it every year. I haven’t seen the completed work yet. So I would like to renew the excitement from here until the release.’

The Scarlet Bullet was originally supposed to come out on 17 April 2020.