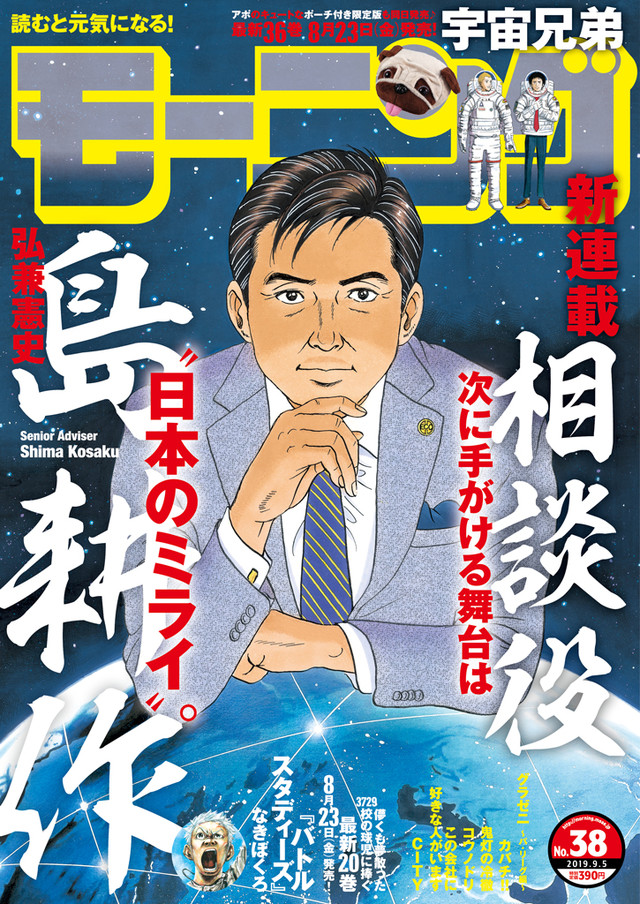 After 36 years, the eternal manga salaryman is changing jobs. Debuting in this week’s issue no. 38 of Kodansha’s Weekly Morning, Consultant Kosaku Shima (Soudanyaku Kosaku Shima) sees the titular Kosaku Shima take his career into his own hands and make a departure from the company that he has called home since 1986.

The future of Kosaku Shima was uncertain after the end of Chairman Kosaku Shima (Kaichou Kosaku Shima) last month. After all, there didn’t seem to be anywhere left for the character to go after becoming chairman of the entire Hatsubashi conglomerate – or so you’d think.

Instead of continuing in Hatsubashi, Kosaku Shima is going independent for Consultant Kosaku Shima, using his expertise from his 36 years at Hatsubashi Electric to work as a consultant or ‘senior advisor’ for businesses.

As the cover of Weekly Morning reads, this move also represents the biggest project for Shima yet – ‘the future of Japan.’ While it’s unsure what exactly this entails for the character, what we do know is that Shima will be getting involved with the various ‘sports business’ opportunities presented by the upcoming 2020 Tokyo Olympic & Paralympic Games.

The Kosaku Shima saga has always enjoyed a close relationship with the real world, and from this, it seems like Consultant Kosaku Shima will be no exception. Even author Hirogane Kenshi’s decision for Shima’s next career path is realistic – many high-profile corporate executives do indeed go independent to act as a consultant for businesses once they’ve reached the top.

Hirogane Kenshi also made an appearance at a press event at the Kodansha offices on August 22 to announced the new series and his reasoning behind the historic career change.

‘I wouldn’t have minded doing the story of Hatsubashi Electric or Kosaku Shima the chairman for 100 years, but he’s always been less of an “owner” president than a “salaryman” president,’ Kenshi explained, ‘meaning that he’s always thinking about the next generation. To secure this, I think he would have always known that he’d have to step down as chairman at some point.’

‘There’s also quite a few ex-classmates and colleagues of mine who’ve all strangely just become consultants this July, so I reckoned it was time for Kosaku Shima to do the same.’

Moving careers in Consultant Kosaku Shima gives the series a new lease of life, as Hirogane can explore new story opportunities with it. In this regard, the future of the series seems secure, at least for the time being.

‘Kosaku Shima will end when I can no longer draw. But since I’m healthy and can still hit 265 yards at golf, I reckon I’ve got a while yet,’ Kenshi laughed.