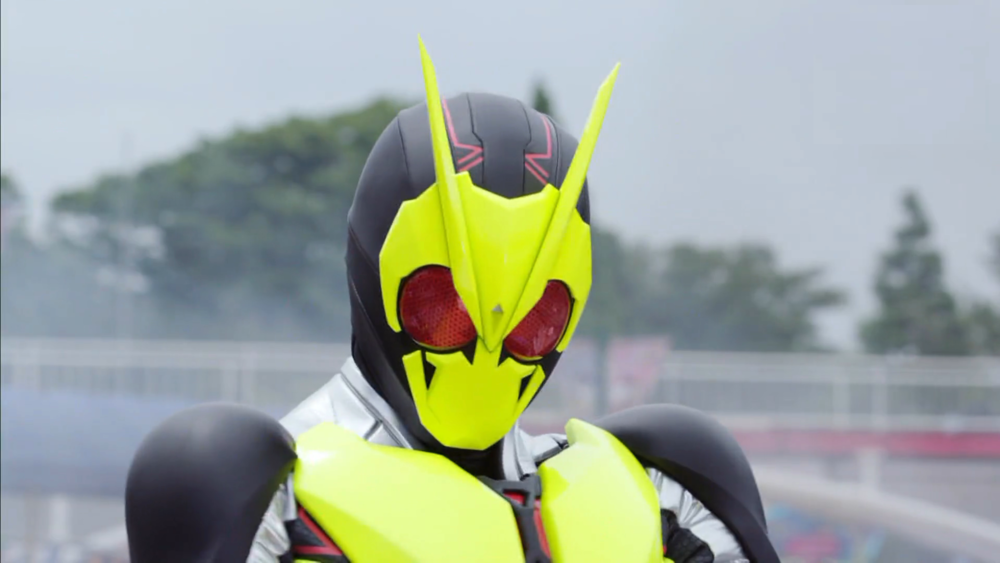 Kamen Rider Zero-One is the 30th and most recent version of the long-running Kamen Rider superhero franchise.  The television series is also known as Kamen Rider 01.

Like pretty much every Kamen Rider series, Zero-One is a live-action tokusatsu television show.

The show features an insect-themed masked superhero.  This superhero rides a motorcycle (hence, the “Rider” part of Kamen Rider) and fights supervillains — these concepts have been common themes throughout the franchise since the first series in 1971.

The Zero-One version takes place in the future — and not just the future of a previous version of Kamen Rider, but an alternate universe.

Artificial Intelligence is a big thing in this future, with humanoid robots called HumaGears everywhere. The biggest name in AI is a company called Hiden Intelligence.

The main hero of Zero-One is Aruto Hiden, the grandson of the company’s founder.  When the founder dies, Aruto is named the company’s new president and CEO — which is a huge unexpected surprise to Aruto, and not a welcome one.

Early on in the series, Aruto clearly doesn’t seem cut out to be a big company leader — although he later shows that he does know what he is doing. However, he would rather be a comedian.

As it so happens, he is pretty bad at that, too.  His comedy always falls flat; often with good reason. Aruto seems to really like bad puns, and when he’s not saving the day, he’s something of a goofball in his normal civilian life.

He may not like the idea of being a businessman, but eventually Aruto accepts his fate, especially when the truth about the role is revealed.  The CEO position comes with an unusual perk — the Hiden Zero-One Driver, which for some reason must be worn by the company president.  The device is a belt which allows Aruto to transform into Kamen Rider Zero-One.

The idea of a corporate president superhero sounds a bit odd, until you consider that it has parallels in the backstory for Iron Man’s Tony Stark and Batman’s Bruce Wayne, both of whom are billionaires when they’re not saving the day.

Incidentally, previous Kamen Riders have included a man raised in the Amazon, a former football player, a photographer, an astronaut, a former cult member, an unfortunate lab assistant, a reporter, a train passenger, a private detective, a vagrant, a delinquent transfer student, a wizard, a street dancer, a police officer, a ghost hunter, a gamer and an amnesiac.

So, maybe it’s not that strange that the current Kamen Rider is a failed comedian turned corporate leader.

In any case, Kamen Rider is needed. There is a cyber-terrorist group known as MetsubouJinrai.net out there.  They are hacking into robots, and turning them into monstrous weapons against humanity.

Kamen Rider Zero-One has help from Kamen Rider Vulcan and Kamen Rider Valkyrie. These heroes are actually Isamu Fuwa and Yua Yaiba.  At the beginning of the series, they work for the Artificial Intelligence Military Service, or AIMS, a government counter-terrorism organization. 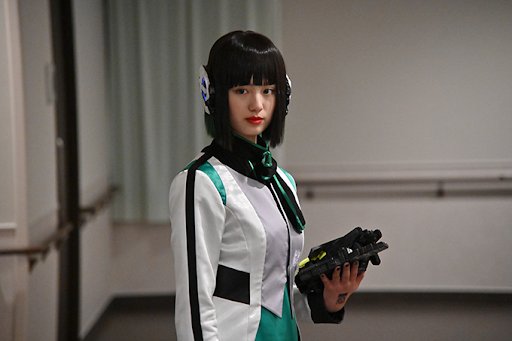 He is also helped by various HumaGears, most notably the secretary AI Is (or Izu).  Is is Aruto’s assistant, and his opposite in many ways.  She is the emotionless, robotic counterpart to Aruto’s goofy personality.

Hiden Intelligence has a corporate rival, ZAIA Enterprise, run by Gai Amatsu.  ZAIA Japan provides equipment for the good guys at AIMS, but Gai also has his own plans for world domination.

Gai’s plans are either directly or indirectly responsible for a lot of what happens in the series. He helps create the Ark, a sentient satellite. He also gives the Ark information about humanity’s bad side, which leads to the Ark becoming the leader of MetsubouJinrai.net.

Gai also develops the technology which allows him to transform into Kamen Rider Thouser, a villainous rival to Kamen Rider Zero-One.

The corporate rivalry between Hiden and ZAIA leads to a Workplace Competition, where the two companies compete to see which one is better.  ZAIA ends up taking over Hiden Intelligence, which is something Gai had wanted all along. Meanwhile, Aruto starts his own company, Hiden Manufacturing.

Eventually, Gai seems to have a change of heart, and he becomes an ally of the good guys — although some still don’t trust him.

Aruto also has a personal rival, Jun Fukuzoe, the vice president of Hiden Intelligence. He is jealous that Aruto got the CEO position, and hopes that he will fail. Over time, his opinion of Aruto improves, and he even joins Aruto at his new company.

Actor Shinya Owada plays a fictionalized version of himself in a couple of episodes.

Toei Company managed to film 35 episodes of the series before COVID-19 struck and slowed down production of just about everything.  Episode 35, What Do HumaGears Dream Of?, aired on May 10.

Starting in the middle of May, Toei aired special recap episodes instead of the regular episodes.  President Special: Part 01 aired on May 17, followed by Part 02 on May 24.  They resumed airing new episodes on June 21.

Any Connection to the Previous Series?

The series is not a sequel to Kamen Rider Zi-O (2018-2019),  although there was a crossover between the two shows.

Surprisingly, even with that many Kamen Rider television shows, there have been a few gaps.  There was a short gap between Kamen Rider Stronger (1975) and Kamen RIder Skyrider (1979-1980).

A Kamen Rider film was expected to come out in summer of 2020.  Kamen Rider Zero-One the Movie was scheduled for July 23, but the release was delayed by the COVID-19 pandemic.

Kamen Rider Zero-One Blu-ray discs are available at Amazon.  They are marked as Japanese Edition.

Note:  Somebody created a MetsubouJinrai.net website, but it does not appear to be linked to the producers of Kamen Rider.  Proceed at your own risk when visiting this website.