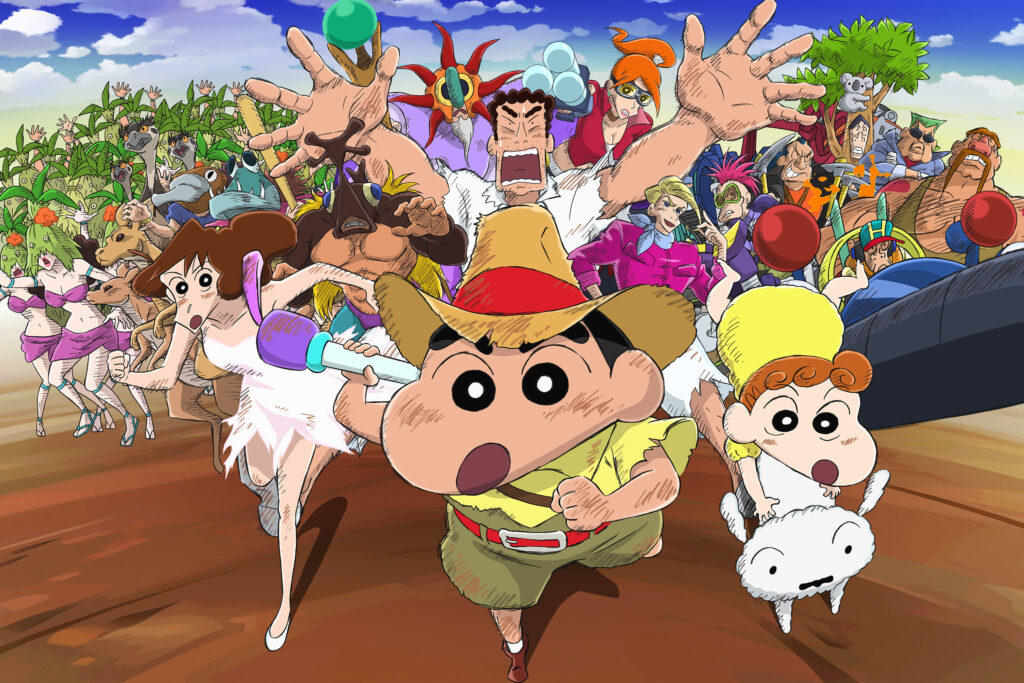 A mischievous and weird five-year-old boy causes trouble in the comedy anime and manga Crayon Shin-chan.

Of course, stories about little kids are nothing new.  Kids in stories can be mischievous brats, such as Dennis the Menace or Marvin. They can be creative, imaginative and playful, such as the stars of Bobby’s World or Rugrats. They can even be philosophical, as in Peanuts.

Shinnosuke Nohara, who goes by the nickname “Shin-chan,” is similar to these other characters in some ways.

But a lot of what happens in Crayon Shin-chan is very different from those other examples.

Crayon Shin-chan tells the story of Shin Nohara, his family and friends, and all of the various real-life adventures that he gets himself into.  (Much of what he does is fun for the audience but frustrating to his parents.)

With Crayon Shin-chan, a lot of the comedy comes from wordplay.  In real life, little kids can be (unintentional) experts at malaprops and spoonerisms.

As parents know, kids are still learning language and proper pronunciation, and words can come out wrong.  Shin-chan is no exception.

Unfortunately, this can also make it hard to translate Crayon Shin-chan properly and faithfully from the Japanese version.  There are a lot of jokes which depend upon understanding how the language is supposed to operate.

Some of these jokes are easier to understand than others — getting pool and cool mixed up, for example.  Saying “okaerinasai” (“welcome back”) instead of “tadaima” (I’m back”) might be trickier to explain, but understandable for an international audience.

Shin-chan can also misinterpret words or phrases, leading him to do weird things when given instructions.

Some of Crayon Shin-chan’s translation problems are based on the problem of having inappropriate or offensive words coming out of a little kid’s mouth.

As a little kid, Shin-chan often has little or no idea that what he’s saying or doing is inappropriate (or if he should know, he doesn’t care).

Because the protagonist is only five years old, there’s a lot of little kid nudity in Crayon Shin-chan. Again, Shin-chan doesn’t seem to mind,  but the international distributors would.

Censorship standards are different in Japan than they are in the United States and elsewhere. They can get away with things in Tokyo that they would not in Topeka.

There’s also a lot of toilet humor and fart jokes in Crayon Shin-chan.

English-language versions of Crayon Shin-chan have gotten around these translation and censorship problems in numerous ways.

Some English dubs of the anime or manga have eliminated many adult jokes and mature themes from the original version.  Nudity has been edited out.

In some cases, pop culture references were added or changed for a North American or international audience. (This can help cover up the fact that a more mature joke was removed.)

Other translations didn’t remove as much of the adult, mature, or potentially objectionable material.

For example, Vitello Productions and Lacey Entertainment censored Shin-chan’s pantless “Elephant Dance,” but they also left in some dirty jokes. The “Vitello dub” is American in origin, but it aired on television in the United Kingdom.

This was followed by a dub by Phuuz Entertainment.  The Vitello and Phuuz dubs are similar in style, but the voice cast is different.

Funimation created a gag dub version of the Crayon Shin-chan anime.  The Funimation version changed some things, and added American pop culture references.  But instead of removing the adult humor, they added to it.

The Funimation version was aired during Cartoon Network’s late-night Adult Swim part of the schedule.  Putting the anime in a late-night timeslot demonstrated that the show was not for kids.

Similarly, the CMX version of the manga has a “Mature” rating — not intended for kids.

Crayon Shin-chan is considered to be seinen —  manga aimed at young adult men.

Not All Fart Jokes

Putting the adult humor and fart jokes aside for a moment, Crayon Shin-chan is pretty good.

There are also Nohara Family vacations, trips to the zoo, kindergarten hijinks, and shopping trips.

Even sleeping can be an adventure when Shin-chan is around.

Shin-chan reacts to these events in creative, imaginative, and sometimes naughty ways.  When faced with a problem, he often comes up with a solution — not always a good solution, but a solution nonetheless.

Shin-chan’s actions can sometimes defy common sense or logic; other times they made sense at the time, but have unintended consequences.

(For example, someone asks Shin-chan a question, but he doesn’t know the answer. She asks for his mother’s phone number, so she can call her and ask her. He has to run home to ask mom. He doesn’t know the number.)

The stories and situations may be weird and exaggerated, but they should be recognizable to anyone who has ever been a child or anyone who has had children.

In later chapters, some of the stories can get a bit fanciful.

For example, Shin-chan’s favorite superhero is Action Mask, a.k.a. Action Kamen. Action Mask is patterned after Kamen Rider and other masked heroes from Japan. At one point, Shin-chan has to save the day when Action Mask is unable to do so.

Coincidentally, Kasukabe is also one of the locations for Lucky Star. There appears to be no link between the two series, other than both manga creators having lived or gone to school there. Must be a fun town.

The manga was interrupted when manga artist Usui died on Sept. 11, 2009. He had gone missing while hiking; his body was found at the bottom of a cliff.

Following his death, a new manga, New Crayon Shin-chan started in 2010. The new manga was started by members of Usui’s team.

In 1996, a bilingual Japanese-English manga series was created. This was called Shin-chan: The Little Horror!

A number of Shin-chan movies were made in Japan.  In 1993, Crayon Shin-chan: Action Mask vs. Leotard Devil came out.

In 1994, there was Crayon Shin-chan: The Hidden Treasure of the Buri Buri Kingdom.

In 1999, there was Crayon Shin-chan: Explosion! The Hot Spring’s Feel Good Final Battle.

Crayon Shin-chan: Fierceness That Invites Storm! The Kasukabe Boys of the Evening Sun came out in 2004.

In 2019, Crayon Shin-chan: Honeymoon Hurricane ~ The Lost Hiroshi ~ came out.

Crayon Shin-chan: Crash! Rakuga Kingdom and Almost Four Heroes was expected to be released on April 24, 2020.

A web animation series started in 2019.  The web series, Super Shiro, is a spin-off featuring the family dog.

The CMX version of the Crayon Shin-chan manga is available at Crunchyroll.

The spin-off manga for Shin-chan’s favorite superhero, Action Mask, can also be found at Crunchyroll.

A spin-off anime, Crayon Shin-chan Gaiden, was created in 2016.  This series is streamed by Amazon Japan.  The first season of this series is also available in the United States on Amazon Prime Video.

There are four seasons of this spin-off. Each season has 13 episodes. However, each episode is short. Each one is only about seven minutes long.  It was released in 2016-2017.

The first season involves aliens, robots, and Shin-chan’s family on a spaceship. It takes place 100 years into the future.