The anime and manga series Creamy Mami is sort of a magical girl version of the Tom Hanks movie Big.

(The full title is Maho no Tenshi Creamy Mami in Japanese. This can be translated as either Creamy Mami, the Magic Angel or Magic Angel Creamy Angel.)

The wand gives Yu the ability to transform from a 10-year-old girl into a 16-year old one.

(There’s probably a bit of symbolism here, as makeup is something an older girl would be more likely to have than a young girl. There’s also the old question of how young is too young for cosmetics.)

Yu also gets a pair of magical girl animal companions — Posi and Nega, a couple of alien cats.  (Posi and Nega are short for Positive and Negative, and the names seem to match their positive and negative personalities.)

During the first transformation, we also see her literally grow up.  Her pant legs and sleeves appear to shrink as they cover less of her now-bigger and taller body.

Interestingly, the first time that she transforms, her clothes don’t change with her. Her older self ends up wearing the same clothes that she was wearing before (luckily, they don’t rip or tear). She is now wearing makeup.

Her hair also changes from blue to purple. She gains a different, more mature-looking hairstyle.

Thanks to the alien’s magic wand, Yu has become Creamy Mami.

In the second episode, Yu learns to change outfits when she transforms. (Creamy Mami typically ends up wearing the same yellow outfit all the time. Although there are a few other outfits that Creamy Mami wears during the series, this would become her iconic idol outfit.) 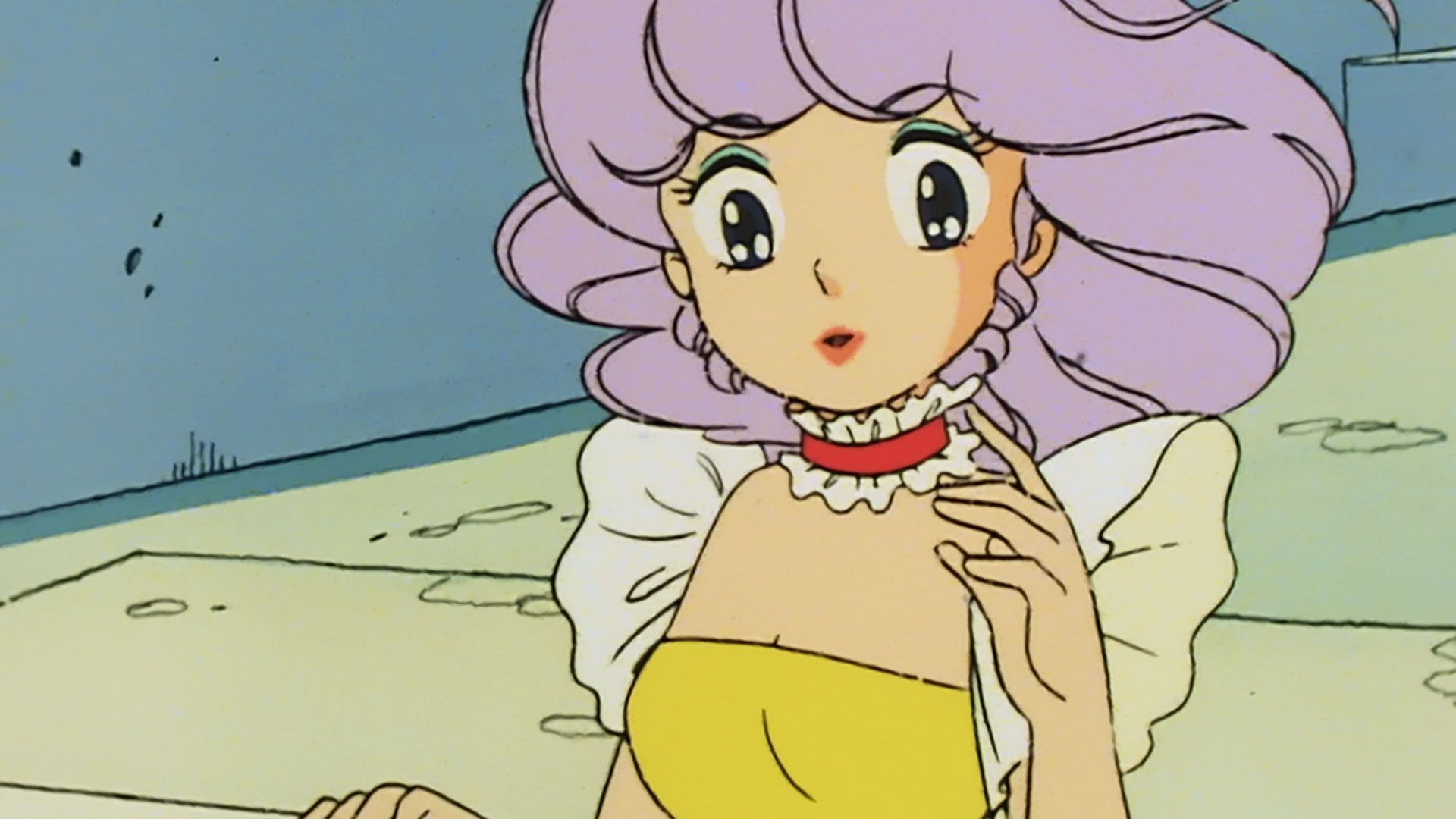 Unlike some magical girls, Creamy Mami doesn’t (usually) fight monsters.  Instead, she uses her powers to become a singing idol.

Creamy Mami doesn’t seek fame, but she is discovered as a potential singing star by Shingo Tachibana. Tachibana is the president of Parthenon Productions.

(Yu names her older self “Creamy,” after the name of her family’s restaurant.)

Creamy Mami quickly rises to the top. Her debut album is a hit, and she soon has idol concerts and other events to attend.

Of course, the road to fame is a difficult one, especially since Creamy Mami has to continue her normal life as ordinary, young schoolgirl Yu Morisawa.  She also has to keep her secret identity a secret.

(This show is two decades before the same “ordinary student with a secret singing star life” theme would be explored by Hannah Montana.  This anime is also a couple of years before the transformation sequences of Jem and the Holograms.)

There is also a jealous rival idol, a nosy reporter, and romantic problems with a potential boyfriend.

Toshio is Yu’s friend, and she has a crush on him. But Toshio falls in love with her alter ego, Creamy Mami.

The show juggles other romantic angles as well, such as the relationship between the jealous idol Megumi and Shingo. This is complicated by Shingo’s interest in Creamy Mami.

Then there are more unusual problems, such as a magical mirror doppelganger who appears in one episode.  This mischievous, troublesome double isn’t just a human imposter in disguise. She’s Creamy Mami’s mirror reflection, brought to life by her transformation sequence.

(Moral of the story: don’t transform in a hall of mirrors.)

It seems you can’t have a magical girl anime without adding some monsters into the mix. A few Creamy Mami episodes do feature magical villains or misunderstood magical creatures. Creamy Mami has to deal with them, even as she deals with singing idol stuff.

Creamy Mami isn’t an action-adventure show, so the solution isn’t always fighting.  One episode features a tiny black stag who appears to bring people bad luck. Creamy Mami shows the unlucky magic stag a bit of kindness, which is enough to return the stag to normal.

Other magical creatures require actual physical fighting.  Episode 15 features a little demon-like alien with a nasty plot. Creamy Mami eventually has to fight the devilish little creature. In this episode, she wields her wand like a sword or a rapier.

This causes problems for Creamy Mami, because her magic can’t ever be revealed.  Because of this big reveal, Yu loses her magic.

Luckily, Toshio is able to fix things — with some help from the alien Pino Pino.  At the end of season 2, Toshio makes a wish which helps her get a new magic wand.

The story continues in episode 27, which is the beginning of season 3. Toshio must forget about Yu’s magic power, but Yu gets her power back.

The anime is 52 episodes long, so there’s plenty of room for both comedy and more serious moments.

The next episode after that (episode 39) is a Godzilla parody/ tribute. Yes, Creamy Mami solves the Godzilla-sized monster problem. She uses her wand to open some sort of time portal, so the monster can go back to the prehistoric land where it came from.

Episode 43, Run, Yu, Faster than the Tortoises, is a time travel episode. Somehow, Yu manages to discover a door to a room that shouldn’t exist. (It’s all part of an urban legend involving a vanishing room in a building.)

She finds the door, opens it, and gets transported back 11 years. (Since Yu is only 10 years old, this is before she was born.) The episode just gets stranger and weirder after that.

Yu gets trapped in a nightmarish mishmash world, where the past, present, and future collide. She meets herself a week into the future. She also watches her own wedding day far in the future.

There are giant clocks and woolly mammoths. Time moves backward for some people. And, she gets chased by flying tortoises.

(The Creamy Mami story would continue in a couple of Original Video Animations.)

The OVA Eien no Once More was released in October of 1984.  This was followed by the OVA Lovely Serenade in March of 1985.

The OVA Long Goodbye came out in June of 1985, followed by the OVA Song Special 2: Curtain Call in February of 1986.

Eien no Once More is a sequel to Creamy Mami. It tells about the rumored return of Creamy Mami. Shingo Tachibana has started a “Project M.”

Long Goodbye (or Long Good-Bye) continues the story from Eien no Once More. Shingo is making a movie, and Megumi is the star.  By this time, Yu is old enough that she can look like Creamy Mami with just a purple wig.

A spin-off manga was created in 2018. The spin-off is titled Creamy Mami, The Magic Angel: The Unhappy Princess. (It can also be translated as The Sullen Princess.)

The spin-off focuses on Megumi. It is told from the point of view of Creamy Mami’s rival. The manga can be found online at Comic-Zenon.com (in Japanese only).

Ota was not primarily a voice actress, but she was a singer in real life.   She sang the opening theme song for the show, Delicate ni Suki Shite (translated as Fall in Love Delicately).

Creamy Mami was used to promote Ota as an idol singer. Her appearance in Creamy Mami helped her gain popularity in Japan.

Where Can We Find Creamy Mami?

Creamy Mami was available on Crunchyroll, but it has been taken down.  It is available on Tubi.  As reported by OTAQUEST in 2019, it is also available at Midnight Pulp.