Animation is a grueling process, even with an original manga to help guide you along the way. Crunchyroll have offered us a look at this reality with their new Dr. STONE behind-the-scenes documentary, launched last Friday via their YouTube channel, along with an insight into how passionate and talented the team over at TMS Entertainment truly are.

Crunchyroll’s Dr. STONE documentary was filmed on-site at the TMS Entertainment offices in Nakano, Tokyo, where they spoke to producer Shusuke Katagiri and director Shinya Iino about how they brought Riichiro Inagaki and Boichi’s original manga to life.

While it’s a shame that we didn’t get to speak with any of the animators or more minor staffers on the project, producer Katagiri and director Iino more than make up for it with how much insight they offered into the animation and adaptation process.

The documentary sees director Iino guide us through the process of storyboarding, where he explains how he both draws from the original manga but also adds his own directorial and artistic flourishes – such as the choice to focus on music and visuals instead of dialogue during the scene where the character of Suica puts on glasses for the first time. 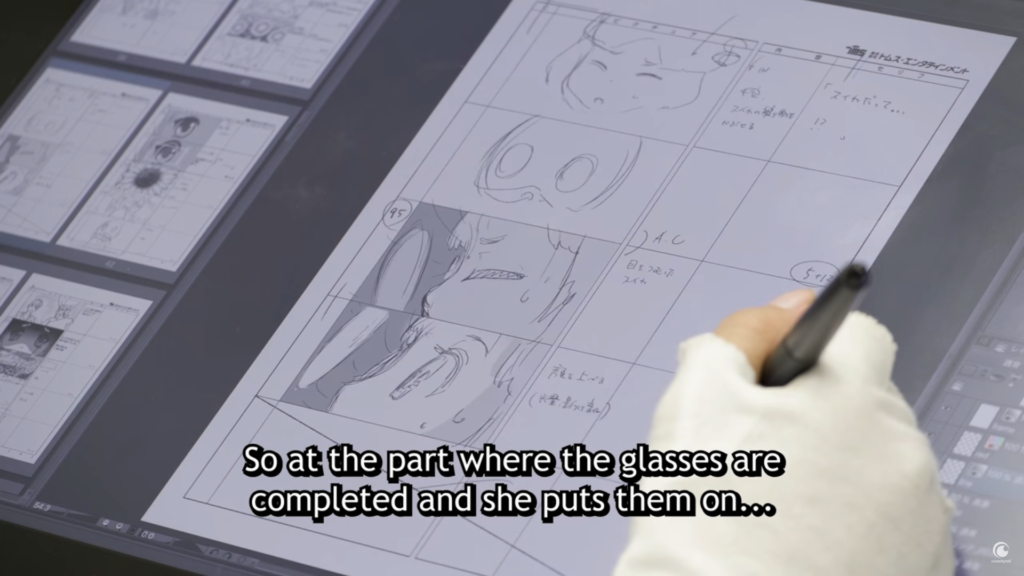 Producer Katagiri, on the other hand, offers a more wide-ranging explanation of the different roles and processes in animation, yet also sees fit to deliver an in-depth breakdown of a particular animation cut from episode one that is honestly fascinating. 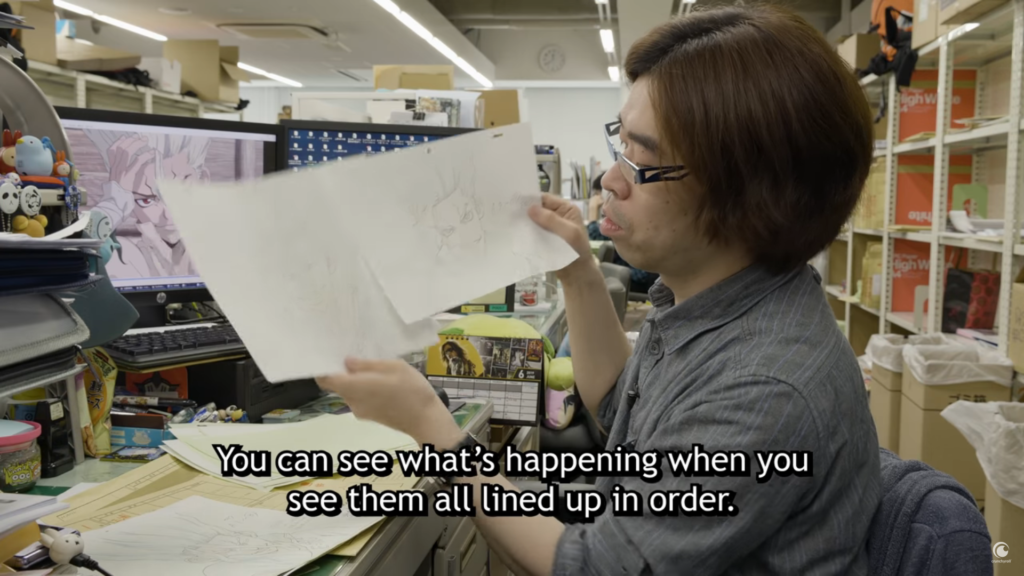 Overall, if this Crunchyroll Dr. STONE documentary highlights anything, it’s just how talented and passionate the team behind the project over at TMS Entertainment truly are. It’s this talent and passion that pushes them to produce a good adaptation not by following the original manga one-to-one, but by understanding the core appeal of the manga and making small changes here and there to that both fit in with the original and make the series work better in animated form.

One particular change that stood out to me was how the team decided to change some aspects of the character designs from artist Boichi’s original designs. As producer Katagiri explained, the characters’ outfits tend to be quite muted in color due to the material used. That’s fine in black and white, but in the full-color environment of animation, it becomes harder to distinguish characters from one another. That’s why the team decided to give Yuzuriha a pink scarf for the anime – a change which I, an avid fan of the original manga, had never noticed until now. 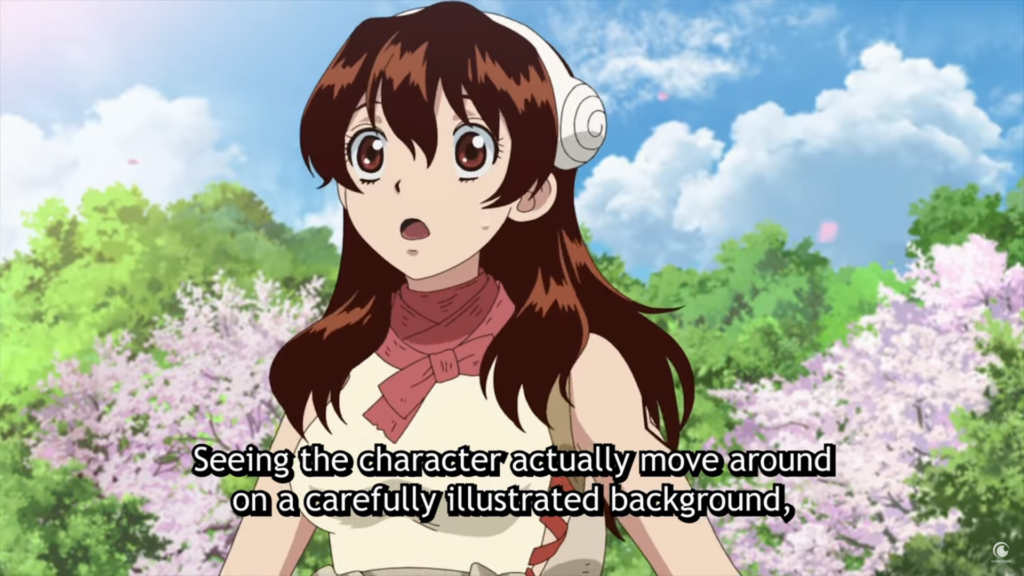 That just goes to show how effective these changes, among others, are. Once more, that’s only possible due to the talent and passion of the team over at TMS Entertainment, as well as admiration and respect for the original work – evident by the faded and well-thumbed copies of the Dr. STONE collected volumes glimpsed in the documentary. 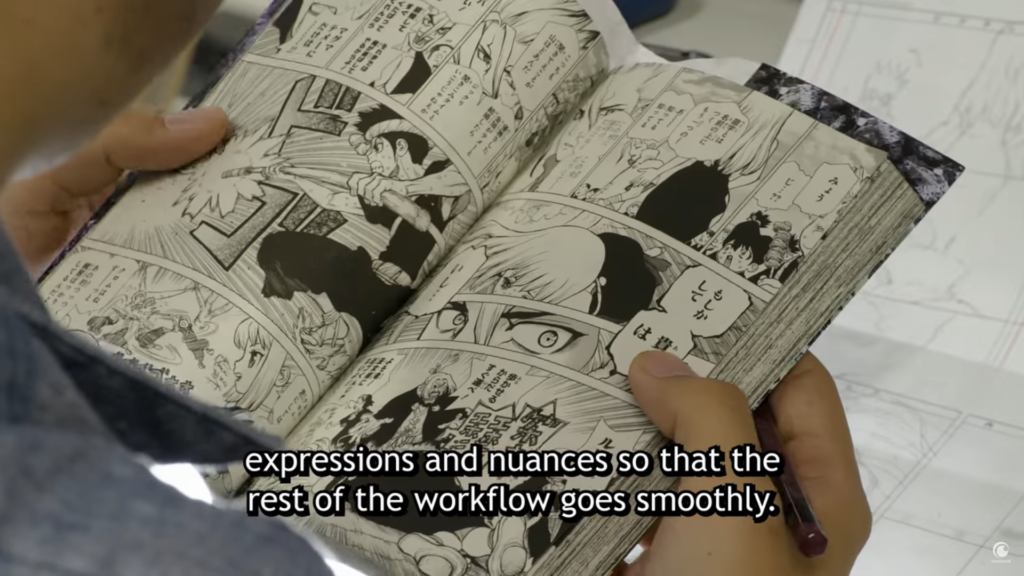 Major credit should go to producer Katagiri for assembling such an excellent team for this adaptation, who intentionally decided to use fresh young talent such as director Iino, as well as assistant director Kentaro Kawajiri, for the project.

Crunchyroll should also be recognized for their initiative in traveling over to Nakano and putting this documentary together, reception to which has been overwhelmingly positive. That’s certainly one better than Netflix’s disastrous ‘Enter the Anime,’ that’s for sure.

Such positive feedback will hopefully spur Crunchyroll on to make more documentaries such as this in the future. Not only will it facilitate a better understanding of the industry in the west, but also go a long way towards the company’s goal of better connecting fans with the things that they love.

You can check out Crunchyroll’s Dr. STONE documentary on their YouTube channel.