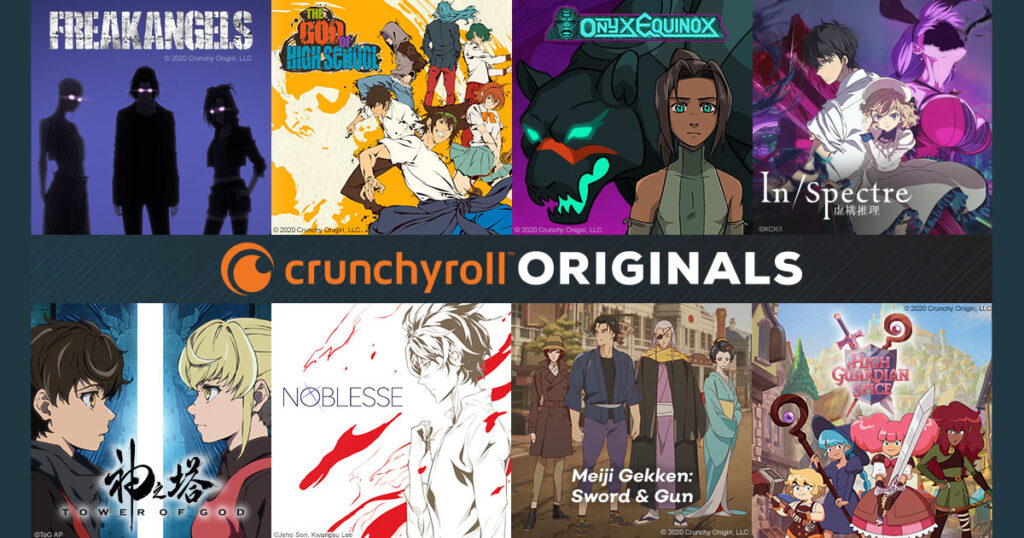 I have long been a fan of Crunchyroll’s streaming service.

Even after their divorce with Funimation, they still have a huge library of new and old popular anime hits.  They remain a safe, easy, and legal way to watch anime series. And you can get anime as soon as it airs in Japan, if you’re willing to pay for Premium — which, if you want to show your support for the anime industry, you really ought to at least consider.

Crunchyroll Originals is an interesting new step for the brand.

It has taken time for Crunchyroll to reach this point. A couple of years ago, I started to notice that Crunchyroll’s name or logo would appear in the credits for some anime shows.  They weren’t just distributing the shows, they had become actively involved in financing the production. (This is a boring but vital step if you don’t want to “run out of ink” like Gainax did with Neon Genesis Evangelion.)

Some of these were oddball, unique, and unusual shows which might not have gotten produced without Crunchyroll’s support.  Shows such as Naruto or One Piece don’t need the extra help. But the world would be a duller place without these other shows.

According to the Crunchyroll website, they have co-produced more than 60 shows since 2015.  Clearly, they feel that they are ready to leap into original productions.

The first of these to air was In/Spectre, which actually started in January.  This supernatural romance thriller features a Goddess of Wisdom and a yokai-meat-eating monster. The science-fiction/ fantasy story Tower of God followed in April.

I’ll admit that not all of the Crunchyroll Originals shows are my style or favorite genre, but they do sound good and interesting — that is, if you’re into that sort of thing. Several arrived pre-loaded with that all-important “highly-anticipated” buzz. Crunchyroll’s partnership with WEBTOON has paid off by attracting existing fans of the digital manhwa platform.

TONIKAWA: Over the Moon For You (a.k.a. Fly Me To The Moon) is expected to start in October.  Judging from the first glimpses that I have seen, it sounds like it might be a good romantic comedy.

Other shows which have been announced, but haven’t come out yet are Noblesse, Onyx Equinox, FreakAngels, Meiji Gekken: Sword & Guns, Ex-Arm and So I’m A Spider, So What?

I’m curious about Onyx Equinox because it is set in Aztec Mexico, a setting which deserves more attention. Anime hasn’t done much with Mesoamerica since The Mysterious Cities of Gold came out in 1982. We’ve seen the sombrero-wearing Tequila Gundam, and the busty goddess Lucoa (Quetzalcoatl), but nothing not ridiculous or horribly stereotypical.

At first glance, So I’m A Spider, So What? sounds vaguely like That Time I Got Reincarnated As A Slime. But, Slime is a good series, so that’s not necessarily a bad thing.

Noblesse is a supernatural story about nigh-immortal “Nobles.” FreakAngels is a post-apocalyptic British series. Meiji Gekken is a tale set in the Meiji Era.

The lineup also includes High Guardian Spice, a series which caused a little bit of controversy when it was first teased in 2018.  For some reason, some anime fans took an immediate dislike to the series.

The show, which was created by Raye Rodriguez, features four girls at a school for young heroes. There’s nothing controversial about the basic plot, which sounds vaguely similar to Didn’t I Say to Make My Abilities Average in the Next Life?!

It’s not Japanese, but that didn’t prevent Teen Titans or Avatar: The Last Airbender from being good.  Both Tower of God and The God of High School are Korean in origin, so that Japan-only ship has sailed.

To be frank, many of the complaints on Crunchyroll’s introductory article seem to come from the same sort of people who didn’t like the 2016 version of Ghostbusters because it had a female cast. One of the early promos for High Guardian Spice celebrated gender diversity in the show’s staff.

Other Crunchyroll fans defended the new show.  The show will finally see the light of day in 2020, after it was originally supposed to debut in 2019.

In any case, it looks fun and cute. It also adds another light-hearted show to the original programming lineup, which skews heavily toward more action-oriented drama.