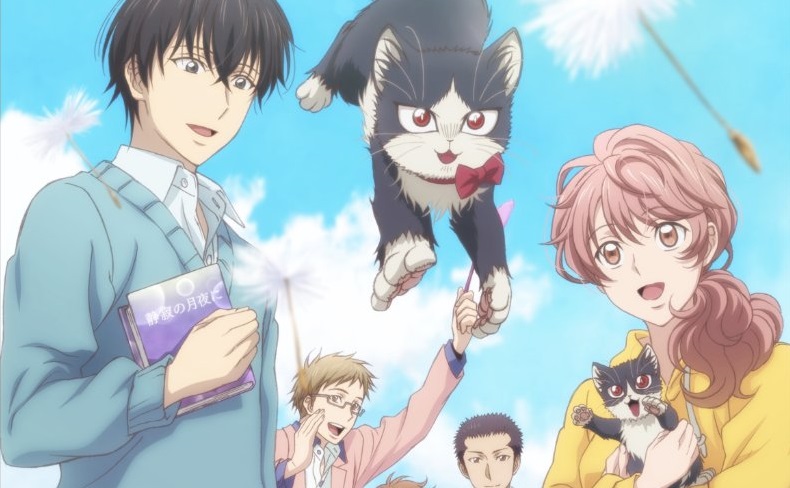 Crunchyroll has added three new titles to their winter 2019 catalog, including Rinshi!! Ekodachan and Rainy Cocoa SideG which premiere on January 8th, as well as My Roommate is a Cat which releases on January 9th. In addition, they have also announced a handful of foreign language dubs dropping on January 15th, which most notably includes an English dub for Konosuba. Considering how stacked this winter 2019 season already is, do any of these titles look promising enough to make room in an already busy watching schedule?

Out of the bunch, My Roommate is a Cat has definitely caught my eyes the most. While I’m not personally familiar with the source material, the trailer has me captivated. The story follows a socially isolated and disgruntled novelist (Mikazuki Subaru) who takes in a stray cat (Haru), changing both of their lives for the better. This is directors Kaoru Suzuki’s (Pupipō!, DIVE!!) third series on directorial duties, both of his other ones also having been manga adaptations. The show looks quite therapeutic, and I have to say I think I’m already in love with cute little Haru. With the trailer closing with Haru mistaking their name to mean “food is coming” really demonstrates the show’s understanding of human-cat relationships. I might be a little bit biased here though, considering that I’m writing this while my cat is napping on the couch behind me.

The next show on the list is Rinshi!! Ekodachan, which is an adaptation of a 4-Koma comedy manga by the same name. As the name suggests, the series revolves around Ekoda-chan who happens to be a carefree soul who lives in the moment. The omnibus format is quite interesting, bringing on a different director, character designer, voice cast, and even a whole other animation studio for each episode. Bringing on names such as Masayuki Kojima (Made in Abyss, Monster), Yoshitomo Yonetani (Food Wars! Shokugeki no Soma), and Koji Morimoto (Magnetic Rose, Dimension Bomb) among others, this production really isn’t shy to flex its muscles. That being said, the nature of the show seems to be rather grotesque, to say the least, while it’s not something I particularly dig it does look promising if you’re a fan of that brand of humor.

There isn’t much to say about Rainy Cocoa SideG, being the fifth installment of the long-running Rainy Cocoa series. If you’ve been keeping up with the franchise then, by all means, pick it up, but it doesn’t look worth passing up on any of this season’s other shows just to catch up.

Perhaps the most significant thing to come out of this announcement has got to be the English dub of Konosuba. Every time a popular series like this gets dubbed, it definitely opens up the gates to more casual watchers who would otherwise not care to dabble into subtitled shows. Given Konosuba’s wide-appeal humor, as well as its sitcom RPG setting in a time where Dungeons and Dragons has practically returned to being a household name, I feel like there hasn’t been a better time for the show to hit a wider market. Due to the show’s reliance on visual gags over dialogue, the dub has a lot of room to go well as long as the cast don’t try and over-do the “meme” factor that the show is said to have.

Overall I feel like this batch is vastly overshadowed by Crunchyroll’s previously announced titles such as Boogiepop and Others, Mob Psycho 100 Season 2, and The Promised Neverland. That being said, I’ll definitely be trying to squeeze My Roommate is a Cat into my seasonal schedule, as it’s just too cute to miss.