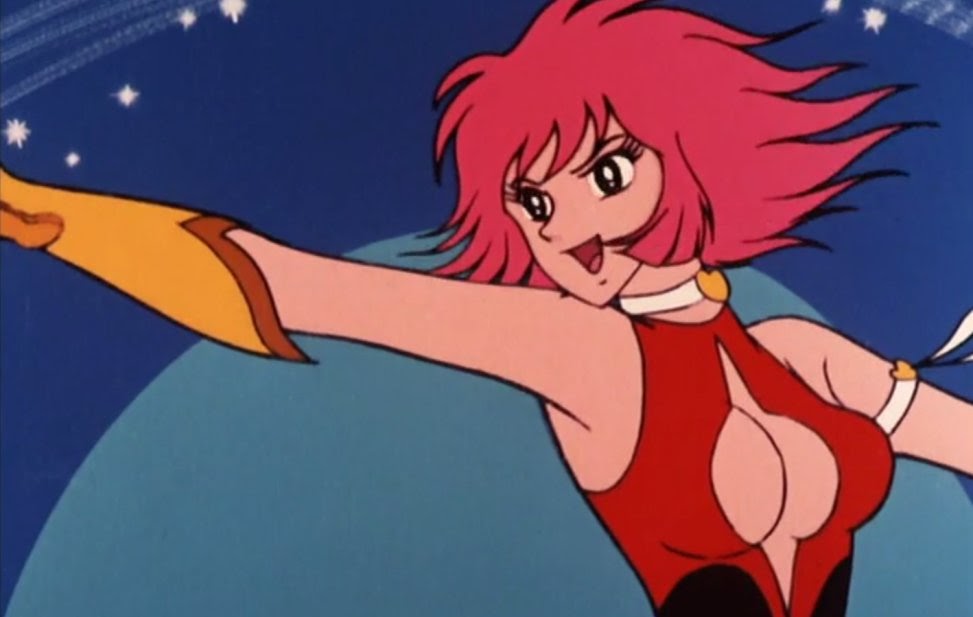 Cutie Honey has everything a magical girl series has to have–a tough heroine, an evil organization threatening to destroy the world, a nifty transformation sequence, and a catchy theme song that I’m forced to sing at karaoke every time I’m in Japan. Though, in the case of Cutie Honey, the transformation is a little more risque than usual, the heroine has a little more sass, and there’s a bit more murder and intrigue.

After all, it’s a shonen series with a female protagonist. That was a first, and it’s proof that Cutie Honey breaks the mold.

Go Nagai, the original creator of the series, has found renewed popularity in recent years due to the wide acclaim of the Netflix series Devilman Crybaby. Famed for his contributions to science fiction, horror and fantasy works, Nagai created Devilman only a year before Cutie Honey in 1972, and the two share some overlap in their respective manga worlds. Devilman Crybaby was announced in 2017, largely to celebrate Nagai’s 50th anniversary in the medium.

In December of 2018, fans were invited to a fancy cocktail party to enjoy Cutie Honey and Devilman treats with plenty of pomp and circumstance. The night was to celebrate a new collaboration series with–get ready–a luxury Italian watchmaker. Wonders never cease.

Nagai also found popularity with his Mazinger Z series, and is celebrated as someone who pushed the envelope in the early days of manga popularity and spearheaded the super robot genre.

After publishing Harenchi Gakuen in Shonen Jump in the late sixties, he was marked as public enemy number one by parent groups for the somewhat lewd content. The work is considered to be the first modern ecchi manga series.

Cutie Honey originally premiered in Weekly Shonen Champion, the same manga magazine running Beastars and Yowamushi Pedal today, and shocked readers in 1973 with the protagonist’s racy appearance and mischievous attitude. The manga would continue until the following year, but with the exception of these chapters being compiled into a single volume in 1985, Cutie Honey didn’t make a comeback until 1992.

The story begins when high school student Honey Kisaragi discovers that her father has been murdered by Panther Claw, a female-led crime syndicate.

Wanting revenge, Honey discovers that she is actually a super-advanced android, capable of summoning a bevy of devices out of thin air to aid her in her quest. Able to transform at will, she takes on a large number of different personas in the series, masquerading as everything from a fashion model with a cigar as a weapon to the recognizable sword-wielding warrior of love and justice.

Fans of the series–or of anime in general–may be very familiar with the Cutie Honey theme song, which has appeared in almost every anime adaptation. Referencing the main characters–ahem–assets, it has been covered over the years by a number of popular Japanese acts, from Pink Lady’s Mie to Masami Okui of Slayers and Sorcerer Hunters fame. In 2008, the original artist of the theme Yoko Maekawa released an album featuring updated versions.

Reemergence in the 90s and Cutie Honey Flash

In 1992, fans were excited to see the release of a new manga series, titled Cutie Honey ‘90. Taking place thirty years after the original manga, it only lasted for ten chapters after complaints of poor animation, bad print quality and lazy storytelling.

Soon after in 1994, New Cutie Honey, an 8-episode OVA series was released. Incorporating cameos from Devilman and Mazinger in a cyberpunk setting, the show is set 100 years after the original story. This would become the only commercially released Cutie Honey series in the US until 2013, when the original 1973 series was released on DVD. It received positive feedback, with critics praising the animation quality and intelligent humor.

Game fans weren’t left out of the resurgence, with Cutie Honey FX releasing in 1995 for PC-FX. If you’re not familiar with the console, it was only released in Japan very soon after the Sega Saturn and Playstation consoles. It was expensive, underpowered, and was discontinued in 1998.

Many current fans of Cutie Honey were introduced to the franchise in 1997, when Cutie Honey Flash offered a redesign of the series as a whole. Characters featured a more typical magical girl look, and for good reason–in Japan, Flash took the time slot of the ultra-famous Sailor Moon series after it went off the air in 1997. In fact, the animation team included multiple employees from the Sailor Moon staff.

Like the previous series, Cutie Honey Flash introduced a number of characters from other Go Nagai productions, including Mazinger Z and Getter Robo. The story is similar to the original, however in this reincarnation, Honey is not an android, and her father has not been killed, only kidnapped. The thirty nine-episode series chronicles her adventure to rescue him, alongside a new character private eye Seiji Hayami. The mysterious Twilight Prince also comes to her rescue throughout the series, but his motivations are often questionable.

Originally, the series was to be digitally animated on hand-painted backgrounds. However, this was eventually changed to hand-drawn cel animation, due to the animators belief that computer graphics should only be used as a supplementary tool.

Miho Shimogasa, the character designer and animation director for the series, stated that digital coloring was ‘too pretty,’ and didn’t match the handmade backgrounds. Digital was cheaper, but it didn’t hold a candle to the heart that went into each handcrafted cel.

A game based on the series was also released in 1997 for the Sega Pico computer system. The gameplay was part dating-sim and part detective point-and-click, with Honey also playing mini-games to advance the plot.

In 1999, Majokko Daisakusen was released for the Playstation, and featured a number of famous magical girl characters in a fighting game/RPG hybrid, including Cutie Honey and Sally from the famed 1966 series Mahou Tsukai Sally.

Re: Cutie Honey and the First Live-Action Film

Cutie Honey made the jump to live-action and the big screen in 2004. Here’s a bit of shocking trivia: the film and three-episode OVA that followed were directed by none other than Hideaki Anno, the creator of Neon Genesis Evangelion, a series which remains one of the most influential anime series ever made.

The film follows the original plot of the manga and stars Eriko Sato as the heroine. Go Nagai makes a cameo appearance in the movie, which was not met with favorable reviews. Many viewers found that it was just a reason to stare at a half-naked woman for two hours, while others complained about the poor CGI and overdone acting.

The OVA, released two months after the film, shared the same story, but was more gratuitous in both character development and nudity. It shared production between Gainax and Toei, and made a number of pop-culture references, including Sailor Moon and Kill Bill. Popular songstress Koda Kumi performed both the opening and ending themes, with the opening appearing in the live-action version as well.

A live-action television series premiered in 2007 and ran for 26 episodes, with Mikie Hara in the title role. It was released to celebrate Go Nagai’s 40th anniversary as a manga artist, and also closely followed the plot of the original manga.

The most recent live-action venture for the series came in 2016 with Cutie Honey: Tears. While it featured more advanced CGI and costumes that audiences enjoyed, Tears was met with widely negative reviews. Unlike the original, the setting was bleak and dreary and the film lacked the humor for which Cutie Honey is known.

Cutie Honey Universe and the Future of the Franchise

The fifth animated series was released in 2018, titled Cutie Honey Universe. The concept for the series was ‘cool-cute,’ and fans were eager to see what a new reboot of the series would offer after the incredible success of Devilman Crybaby. Go Nagai was even a guest at Anime Expo ‘18, purely to promote this new installment of Cutie Honey.

It didn’t offer much.

While critics claim that the twelve-episode series started to improve halfway through its run, it didn’t seem enough to save it from further criticism. The fight scenes were excellent, the humor was present, the bright colors and familiar monsters were there. In typical Cutie Honey fashion, by the end of the first episode, Honey is basically naked, which may or may not be a plus to some.

However, the more emotional parts of the series seemed forced, and the story tried to do too much, leaving viewers confused and exhausted. If fanservice is your style, it’s here in abundance. I just might not get my hopes up for season two.

For those wanting to make up their own mind about the series, it’s available to watch on HiDive.

Will we get another remake? Most likely. While there haven’t been any announcements yet, I’m keeping my eyes on the horizon. Whether it’s your style or not, Cutie Honey is a piece of anime history.

She won’t be going down without a fight.