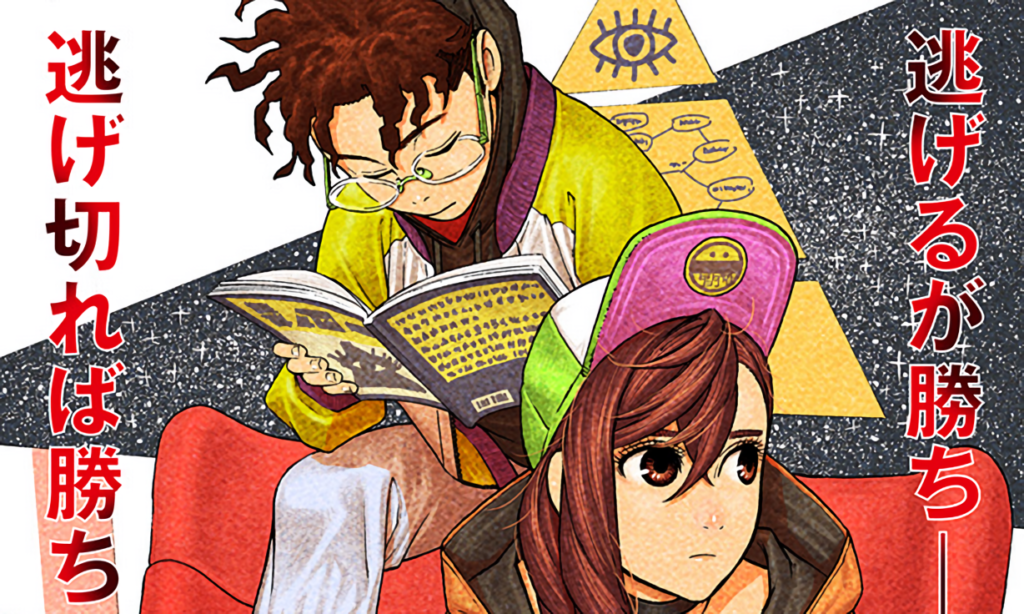 If you’ve been feeling the absence of both Chainsaw Man and Hell’s Paradise: Jigokuraku ever since they ended last year, then I have some good news for you: there’s a manga by an author who was mentored by both Tatsuki Fujimoto and Yuji Kaku. His name is Yukinobu Tatsu, and it’s called Dandadan.

The connections between Dandadan, Yukinobu Tatsu, and two well-regarded manga authors were undoubtedly at least part of the reason why the series blew up when it started on Jump Plus back in April, but it’s not just a case of simple name recognition. On the whole, the series is notable for its incredible art, imaginative setpieces, and effective character designs. There’s also an undercurrent of romance that has me very excited to see where the story leads.

In many ways, then, the student has become the master. 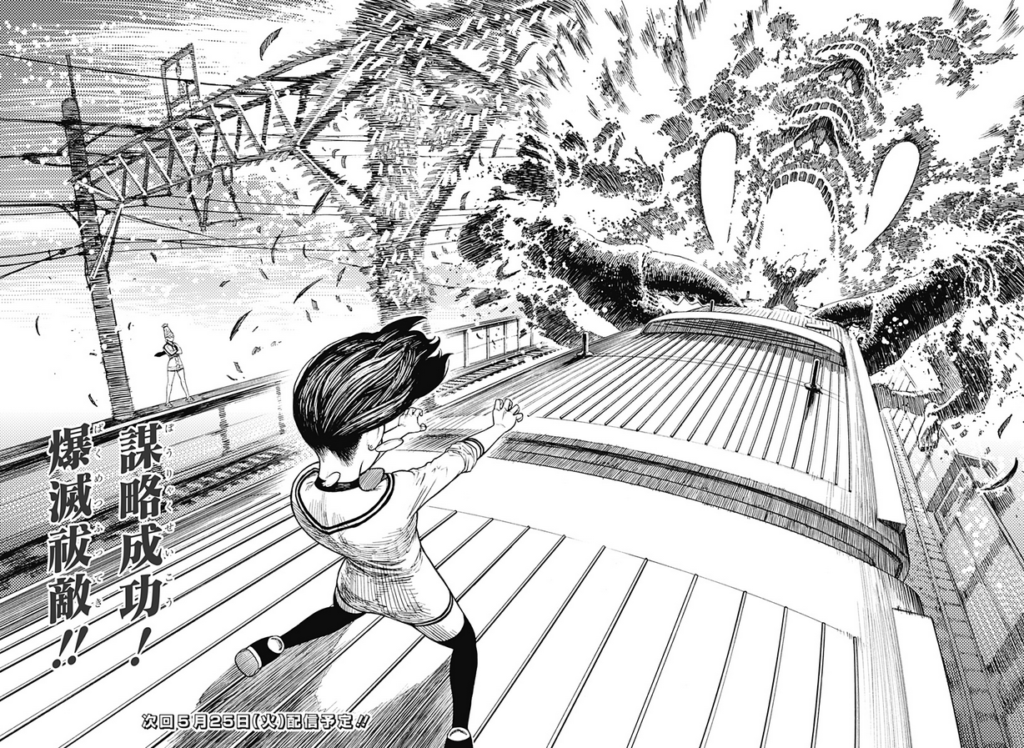 Just looking at the panel above should make it more than clear that one of the main draws of Dandadan is its incredible art.

It’s honestly been a long time since I’ve seen such detailed, dense, yet clean artwork in a weekly series. There’s not one single line here that goes to waste: everything is drawn with such precision that you understand even at a glance what is going on and who is involved. The fact that Yukinobu Tatsu spent years as an assistant probably has something to do with this, honing his skills in the service of others, but it’s still surprising.

That being said, all of that artistic prowess would be for nothing if the author didn’t know how to use it. Where Dandadan’s true strength lies, therefore, is not just in simple artwork, but also imaginative setpieces. The last couple of chapters are chock-full of examples: how about the fight in chapter 7 between Momo and the ‘Turbo Granny’ on top of a high-speed train? That moved things away from simple hand-to-hand combat and into an entirely different environment. There’s also the part where Turbo Granny managed to manipulate everyone in town to chase her and Okarun, provoking both fear and awe in equal measure. 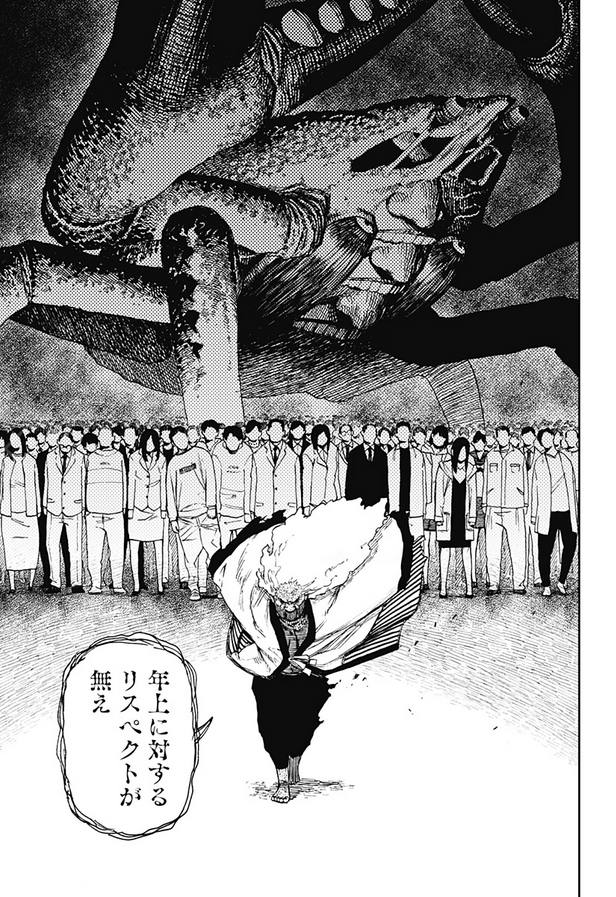 Rather conveniently, this brings me onto my final point about Dandadan’s incredible art: the character designs. Much like Tatsu’s overall art style, they are very clean, managing to be both easy to understand and expressive at the same time. Yet, the one thing that radiates throughout the human character designs specifically is an overwhelming sense of cool: Momo’s outfit and Okarun’s hair, in particular, are critical in giving off the impression that this is a series very much rooted in the now. The monster designs are also genuinely scary, mainly because Tatsu diverts away from his usual clean look and towards something more dark and dirty.

If good art is useless without a good eye for interesting action, then this interesting action would also ultimately feel meaningless without a strong set of characters and story to root it in. Luckily, Yukinobu Tatsu isn’t lacking in this regard, either: while the story of Dandadan isn’t exactly mind-blowing at this stage, it does enjoy a strong emotional core in the form of Momo and Okarun’s relationship.

At the end of chapter 1, we find out that Okarun’s real name is Ken Takakura: the same as Momo’s celebrity crush. She can’t even bring herself to associate the hunk of her dreams with this pathetic nerd, so she makes up the name ‘Okarun’ based on the fact that he’s obsessed with aliens and the occult (it works in Japanese). Even so, it’s pretty clear just from this first chapter alone that the two are destined to fall in love.

In their efforts to rid Okarun of the curse of Turbo Granny, the unlikely pair grow closer and closer together. The latest chapter as of the time of writing, chapter 9, has them even desperate to talk to each other during class, mainly because of the unique experiences that they’ve shared together. If the romance genre often uses the idea of ‘unlikely couples’ (the teacher and the student, the nerd and the normie) to craft an engaging story, then Dandadan might actually be a paranormal love comedy.

Indeed, Dandadan wouldn’t be the only series under the Jump umbrella to take this route in recent memory. In the pages of Weekly Shonen Jump, Yoshifumi Tozuka’s Undead Unluck is doing well precisely because of the genuine bond shared between the two main characters Andy and Fuuko, as well as others. This might have something to do with the growing popularity of shonen manga among female readers (especially because of Demon Slayer: Kimetsu no Yaiba), but that’s a topic for another time.

For now, Dandadan has me very interested in reading more. Setting aside for the second that the series is a visual and technical marvel, I’m genuinely interested in seeing how and if these two very different characters actually end up together. At the very least, it has managed to overcome a lot of my apprehension on the basis of the first chapter alone.

The only way is up.

Dandadan is coming in English to VIZ Media’s Shonen Jump and Manga Plus later this year. In the meantime, you can read it in Japanese via Jump Plus.