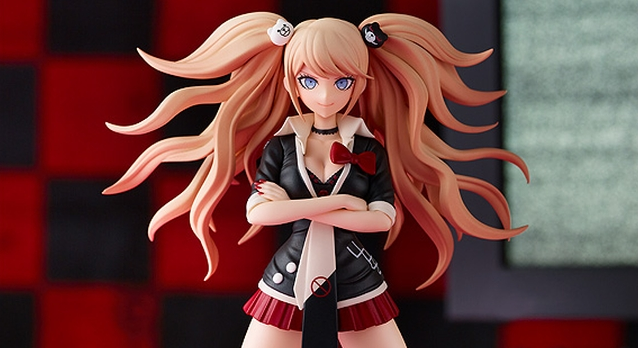 Last year Danganronpa celebrated its 10th anniversary. Fans geared up for a year of announcements, with each month promising new reveals, merchandise, and commemorative events. But, as we all know, 2020 did not go to plan for anyone. Spike Chunsoft confirmed that many of their goals did not come to fruition and celebrations would continue into 2021.

Good Smile Company and Phat! Company have certainly turned the anniversary excitement to the max with their announcement today. Not one, not two, but four iconic Danganronpa characters will be joining the POP UP PARADE line.

In addition to Junko going up for preorder today, POP UP PARADE figures of Kyoko Kirigiri, Chiaki Nanami and Nagito Komaeda from "Danganronpa 1•2 Reload" are in the works! Stay tuned for more information coming soon!#danganronpa #PopUpParade #goodsmile pic.twitter.com/EQF9CG44Sq

While we’ll have to wait to see the prototypes for the figures of Nagito Komaeda, Chiaki Nanami, and Kyoko Kirigiri, we have the Queen herself, Junko Enoshima up for pre-order. From today to 24 June 2021, fans can order her at the sweet price of 3900 yen (no despairing there!). The figure is quite reminiscent of Algernon Product’s 2013 scale figure release, but at almost a quarter of the price. The images so far look awesome, but as usually is the case with POP UP PARADE, my concern is with the base. Traditionally PUP features a pretty basic one color hexagon base. Perhaps I’m being too hopeful in wishing these Danganronpa figure bases will have some additional pattern or design.

The future is definitely looking bright for Danganronpa fans. But with the limited number of Danganronpa figures out there, and most of them of the four characters Good Smile has announced, I can only hope other characters from the series’ expansive cast get a chance in the limelight.

This has been a massive week for Good Smile and their POP UP PARADE line. Along with Junko’s pre-orders opening today, so too did PUP figures for Yu-Gi-Oh‘s Seto Kaiba, Dai and Popp from Dragon Quest: The Adventure of Dai, and just two days ago, Kagome and Inuyasha from Inuyasha!

I have to be honest; I am quite surprised at all these exciting announcements happening just days away from the Wonderful Hobby Life For You 33 convention. It can only make me hopeful that GSC are paving the way for some truly mind-blowing announcements this weekend.