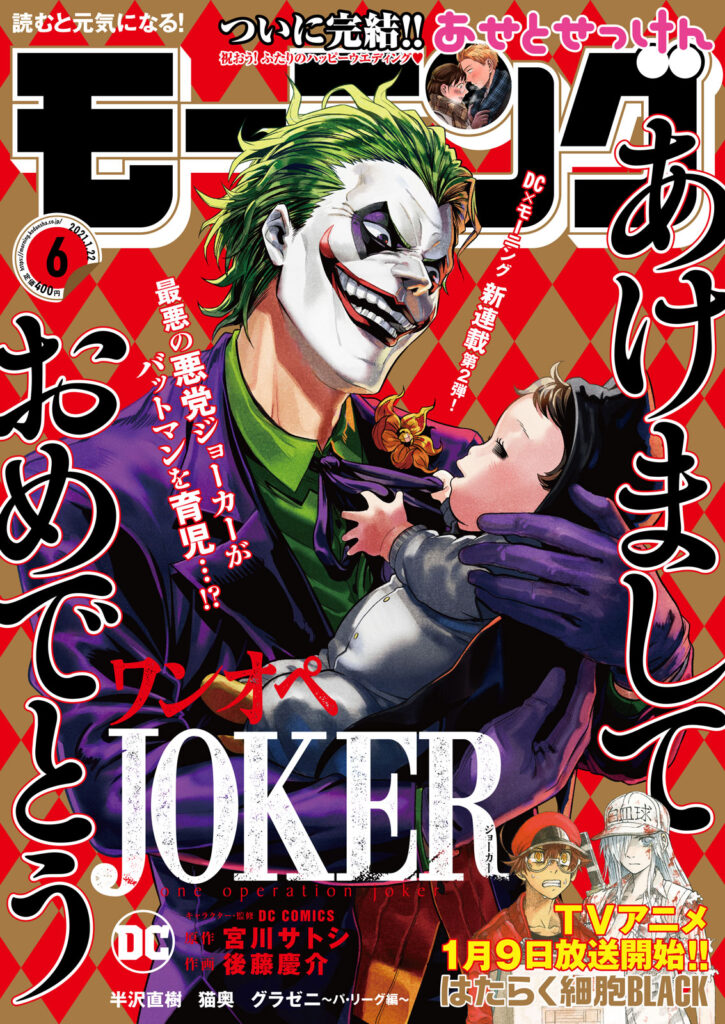 DC and Kodansha gave us a little holiday cheer a few weeks ago when they started publishing their BATMAN JUSTICE BUSTER collaboration manga. Now they’re back for more with another collaboration: the ridiculous Joker: The One-Man Operation. And believe me when I say that things get absurd.

This one starts off as a very classic Joker story, featuring him in all of his make-upped menace, stumbling down a dark, rainy alleyway. We even get to see the same staircase seen in the recent Hollywood movie. In the most horrorshow of fashions, Joker then brandishes a knife inches away from a baby’s face.

But plot twist: the baby is actually Batman, who was transformed after a fight with Joker ended with him falling in a vat of toxic goo. The Joker, seeing Batman as his eternally necessary archnemesis, takes it upon himself to raise him as his surrogate father. I don’t know if this logic makes a lick of sense, but I do know this: it’s pretty funny.

DC announced their so-called ‘diabolic parent comedy’ back in mid-December as part of a new joint project with Kodansha that had been in the works since fall 2019. BATMAN JUSTICE BUSTER is the first part of it, with its opening chapters published in Morning on Christmas Eve, featuring work from ULTRAMAN manga duo Eiichi Shimizu and Tomohiro Shimoguchi.

Meanwhile, the first chapter of this new Joker manga was published just today in Morning and Kodansha’s Comic DAYS website. At this point, it’s still too early to really know what sorts of ridiculous lengths this Joker manga will go to. One thing is for damn sure though, and that this is most definitely da Joker, baby (or in this case, the Joker and a baby).