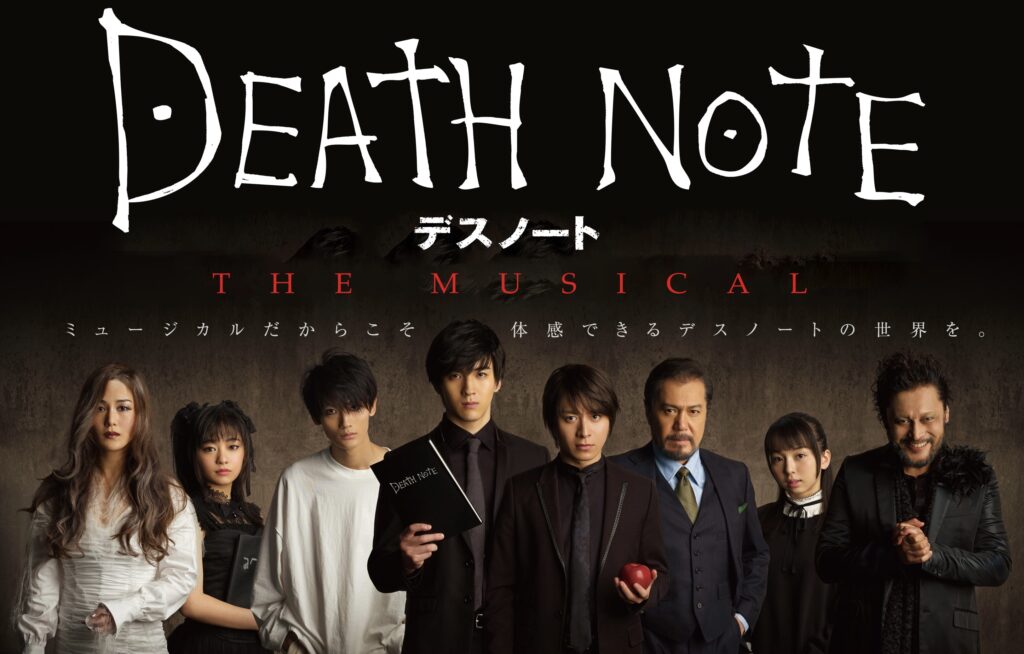 Do you remember when Death Note was made into a musical and almost hit the stage in New York?

The recent news that Moyoco Anno’s Memoirs of Amorous Gentlemen would become the first manga series to receive a Broadway adaptation was a surprise to many, including myself. Death Note as a franchise has always been a vessel that reinvents itself at every opportunity. Aside from the anime adaptation of the series produced in conjunction with its serialization in Weekly Shonen Jump, each adaptation, for better and for worse, has had its own interpretation on the world of Death Note.

The first Japanese live-action adaptation in the mid-2000s and later TV drama are both enjoyable reinterpretations of the original story that differentiate themselves from the original. Then there’s the Netflix adaptation.

These adaptations show the series is more than willing to change, making a musical adaptation less unusual than it initially sounds. Perhaps the only surprising thing about the decision was that it was a team in New York who went about crafting this unique adaptation.

The result is the best interpretation of the Death Note franchise to date.

Fresh Eyes For a Reimagined Classic

In 2013, Frank Wildhorn was known most prominently for his work on popular musicals like Jekyll and Hyde. He’s not the first name that would come to mind for adapting a Japanese manga to the stage, and as he admitted in 2015, he hadn’t heard of Death Note when he was initially approached to create the musical.

Bringing someone unfamiliar into the creative process is a risk, but the decision makes sense. Multiple of Frank Wildhorn’s theatrical credits, including his most recognizable Jekyll and Hyde as well as Dracula, modernize and bring a new perspective to well-recognized stories, capturing the emotional core of these works through music. This is exactly what was needed to make a Death Note musical a success.

Wildhorn got to work towards creating an English concept album alongside a small New York workshop performance for a potential On- or Off-Broadway run, which was completed by the following year. For this, he also brought on Natalie Cole to do the score, Jack Murphy for the lyrics and Ivan Menchell to work on the script. Although the album was never officially released and the English run of the show never took place, the recordings have since been released online alongside clips and promotional videos from its various showings in Japan.

Bringing in a talented cast featuring the likes of Jeremy Jordan as Light and Jarrod Spector as L, this streamlined take on the series centers the series around a debate on what ‘justice’ is and how it should be administered. While this was a core theme of previous adaptations as well, the musical emphasizes the conflict between Light and L in a way that centralizes these ideas more prominently.

Not only that, one major flaw with the original story that almost every subsequent adaptation has improved upon is the handling of Light’s descent into chaos and his eventual demise. In the original story, the centralization of Light also inadvertently celebrates his quasi-fascist God complex. Even as the story shifts in the final chapters and episodes to condemn Light’s actions as we come to celebrate the previously-overlooked Matsuda’s growth, the framing of the story until this moment fails to adequately criticize the genocidal, dictatorial nature of Light’s actions.

The musical turns Light, a man who believes justice will only be served by taking events into his own hands, and L, who works independently of traditional institutions to best inflict justice, into representatives of their ideals, using secondary characters to grow these arguments. What truly sets it apart, however, is how the Death Note musical expands this debate beyond what other adaptations by framing justice in the context of societal inequality.

While the overture hints at the god complex that would eventually consume Light, the opening song ‘Where Is The Justice?’ sets Light up as a character to root for while placing the failures of the current justice system within the unequal society he resides in, where ordinary people lack power. This further sets up the tragic ending as his solution creates a similarly-hierarchical system that was doomed to fail as he becomes an embodiment of everything he claimed to oppose.

I’d say this was a standout song if the rest of the soundtrack wasn’t equally memorable. Light’s first use of the notebook changes his life like a ‘Hurricane’. As L is introduced we see them perform multiple duets that vocalize the mind games going on between the two intellectuals such as ‘Stalemate’. They even adapt the tennis match in the song ‘Playing His Game’. Songs given to Ryuk and Rem add to their characters well, and their introduction in ‘Only Human’ sets them up as overseers to their game.

While it took time for the song to win me over, I even love the song given to Light’s father, which is tinged with hurt as he denies the truth that Light could be Kira. It comes with the subtle insinuation that he believes L and is simply refusing to accept reality, which adds a painful layer of depth the character lacks in other adaptations. This is all built up to an incredible finale with ‘The Way it Ends’.

This ending recontextualizes the story by exposing Light’s god complex while not discrediting his critiques of structural inequality made at the start of the show, emphasizing the conclusion that laws alone won’t change society while inequality robs a person of power. The musical asks us to reconsider our own conceptions of justice and find a new solution, rejecting black-and-white morality for systemic reform. Telling this tale through the stage is a perfect fit since the limitations of the stage requires a level of abstraction that lends itself to psychological tales like this portrayed through metaphor.

Could the Death Note Musical Receive a New York Showing in the Future?

While the Death Note musical never received the New York run it deserved, the musical found success in a translated form in Japan and Asia, where the show has been performed on-and-off to sold-out audiences since 2015. A few of these performances were later broadcast on Japanese TV, while the show later made the jump to South Korea and Taiwan for similarly-successful stage runs.

In the wake of the news that Memoirs of Amorous Gentlemen will hit the Broadway stage, and now that the show has proven itself to be a success in Asia, is there hope that the Death Note musical could eventually get a US performance? It’s possible.

In 2018, Ivan Menchell noted that an English performance wasn’t off the cards, though it would likely be performed in London before hitting New York. Before the pandemic, when the 2020 show run took place in Tokyo, HoriPro CEO Yoshitaka Hori noted that the original plan was for the musical to be the company’s first worldwide production targeted primarily at British and American audiences. The company wants to make a new push for international expansion, and a revival of the Death Note musical could fit here.

In many ways, this interpretation of the musical grounds itself to reality in a way that throws the story more directly into contemporary politics, with its discussions more relevant today than they were even when it was first conceived in 2013. Whether or not a Western performance ever comes to fruition, the Death Note musical is more than worth your time.

Surprise! act-age Is Getting a Stage Play, Not an Anime