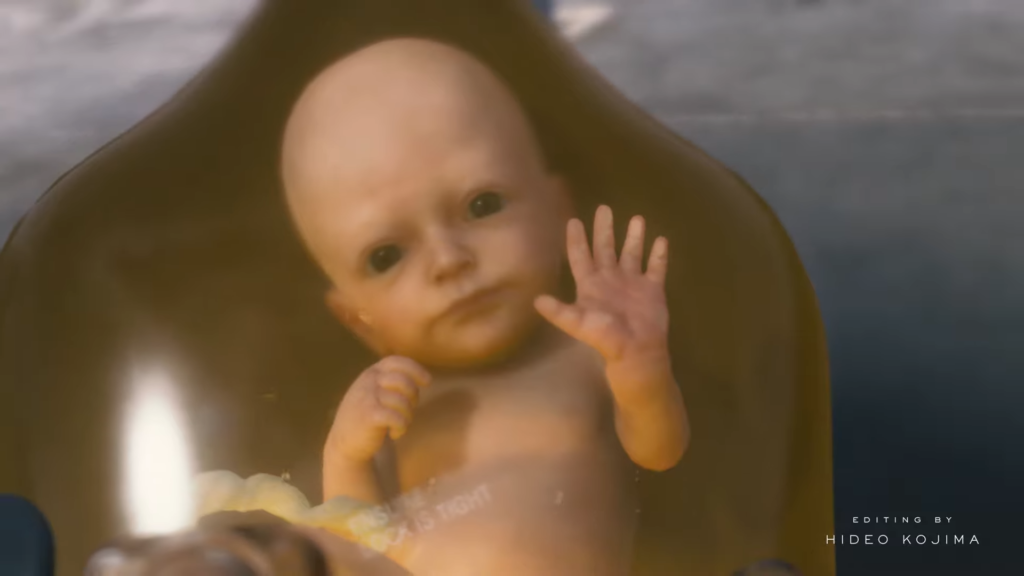 It barely feels like yesterday that Hideo Kojima appeared at The Games Awards like a phoenix rising from the ashes to premiere his first, bonkers trailer for Death Stranding. Fast forward to now, almost three years later, and the finished product is finally in sight. Following a series of mysterious videos and a lengthy Twitch stream, Death Stranding revealed its latest trailer, as well as the extremely imminent November 8, 2019 release date.

Aside from the release date, this latest Death Stranding trailer shows us some of what everyone was clamoring for – gameplay. Scenes of Norman Reedus’ character Sam using a futuristic yet ramshackle motorcycle, deploying a ladder and scaling a chasm with a rope highlights the game’s focus on exploration and traversal, which in turn underscores the game’s focus on the ‘rope’ instead of the ‘stick.’

That isn’t to say that you won’t be using the ‘stick’ at all, however. We also get a rather lengthy scene of Sam fighting some enemies clad in bright yellow suits, as well as running away from a similarly garish truck. This, along with another scene where Sam uses an assault rifle, shows us that combat will still be a possibility alongside the more pacifistic gameplay elements.

But the game’s focus on the ‘rope’ over the ‘stick,’ on ‘connections’ over ‘conflict,’ has been integral from day one, and this focus is only reinforced by the glimpses of story and setting that we get in this latest trailer. The world of Death Stranding has been devastated by some kind of apocalyptic event called, well, the Death Stranding, and it’s up to Sam to reconnect the fractured nation of America once more. Even if he doesn’t sound too thrilled about it.

All of this could be gleaned from the various soundbites that Kojima has provided over the years, as well as the previous trailers, but what this latest trailer and the official synopsis does reveal is that the game will be much more politically loaded than once thought.

Kojima’s above statement that “People have built ‘Walls’,” as well as his choice to set the game in America draws a clear parallel between the policies of the current Trump administration and the devastated world of Death Stranding. This isn’t exactly a novel or new idea, but it does mean that Death Stranding joins Promare in commenting on these controversial, if detached, issues.

That being said, it’s not just theming clarified in this latest trailer. We also now finally know the full ‘cast’ for the game, along with their official names. Alongside the first appearance of Troy Baker as ‘Higgs,’ we also get the addition of two all-new actors to the cast – those being Margaret Qualley as ‘Mama’ and Nicolas Winding Refn as ‘Heartman.’

I asked my bestie, Nicolas, to be “HEARTMAN” in DS as special guest. We 3D scanned his head, body, and facial expressions to make his 3D model, but his acting and voice are done by a different performer, same as with Guillermo. 👍🌈🦀🐟🐋☔️ pic.twitter.com/wOGt0LfX89

Kojima managing to convince Nicolas Winding Refn, who usually prefers to take a directorial role, to ‘act’ in his game is pretty awesome, but perhaps not that surprising given that he and Kojima are apparently good friends.

Perhaps his friendship with Guillermo del Toro has also ensured his presence in the game after all, as Kojima had previously said that del Toro was only standing in for another actor for the second trailer. Even so, it’s worth noting that both Winding Refn and del Toro’s performance will be provided by another actor, but using their motion captured models. Isn’t technology crazy?

We also finally got some official names for the entire cast of Death Stranding in the trailer, meaning that I can finally stop referring to them by their actor’s name. Alongside Norman Reedus’ character ‘Sam,’ Guillermo del Toro will be playing ‘Deadman,’ Lindsay Wagner as ‘Amelie,’ Troy Baker as ‘Higgs,’ Margaret Qualley as ‘Mama,’ Mads Mikkelsen as ‘Cliff,’ Léa Seydoux as ‘Fragile,’ Tommie Earl Jenkins as ‘Die-Hardman,’ and Nicolas Winding Refn as ‘Heartman.’

I was slightly afraid that Kojima might have given up crazy names post-Konami, but clearly, I couldn’t have been more wrong – stuff like ‘Die-Hardman’ is really up there with the worst/best of Metal Gear Solid. It’s also reassuring to see that Norman Reedus still can’t play any character other than Daryl from The Walking Dead, as evidenced by the line “You’re the President of jack shit.” Not that I’m complaining.

Alongside character names, we also got some clarification on the lore of Death Stranding. Those babies that Norman Reedus was caught cradling all the way back in 2016 are called ‘BB’ or ‘Bridge Babies,’ and the mysterious shadowy creatures that seem to be behind the Death Stranding are called ‘BT’ – perhaps standing for Bridge Things.

Sam failing a stealth section and getting caught by the BT in this latest trailer also gives us a little hint as to the context of the absolutely mental second trailer, as Sam is seemingly blasted back in time to an alternate WW1 setting. Perhaps del Toro’s ‘Heartman’ also suffered the same fate before the second trailer, which is why he was hanging out in the trenches back then.

It’s also back in the past that Mads Mikkelsen’s ‘Cliff’ character seems to reside, as Troy Baker’s ‘Higgs’ refers to him in a voiceover as his “good connection to the other side.” I’d wager that Cliff is the big bad of the game, seeking to break through from the BT dimension to wreak havoc, alongside the more minor antagonists of Die-Hardman’s (Tommie Earl Jenkins) ‘Homo-Demons’ terrorist group. But this is Kojima after all, so I wouldn’t want to make any concrete conclusions.

Finally, to round off the eight-minute trailer, Kojima dropped the bombshell that has been echoing around the internet ever since – Death Stranding will launch this year, on November 8 for PlayStation 4.

This isn’t that surprising for anyone who has been following the game’s development closely – Kojima said that the game was in the ‘polishing phase’ last year – but it is an incredible testament to how hard the battle-hardened creator has been working. To create, fund and staff an entirely new studio from scratch, and then put together a triple-A game in about three years? That’s absolutely unheard of, and Kojima really deserves some credit for that – especially given his track record.

Either way, preorders are open now for Death Stranding on PlayStation 4. Various different pre-order bonuses and editions are also available if you’re interested in that sort of thing.