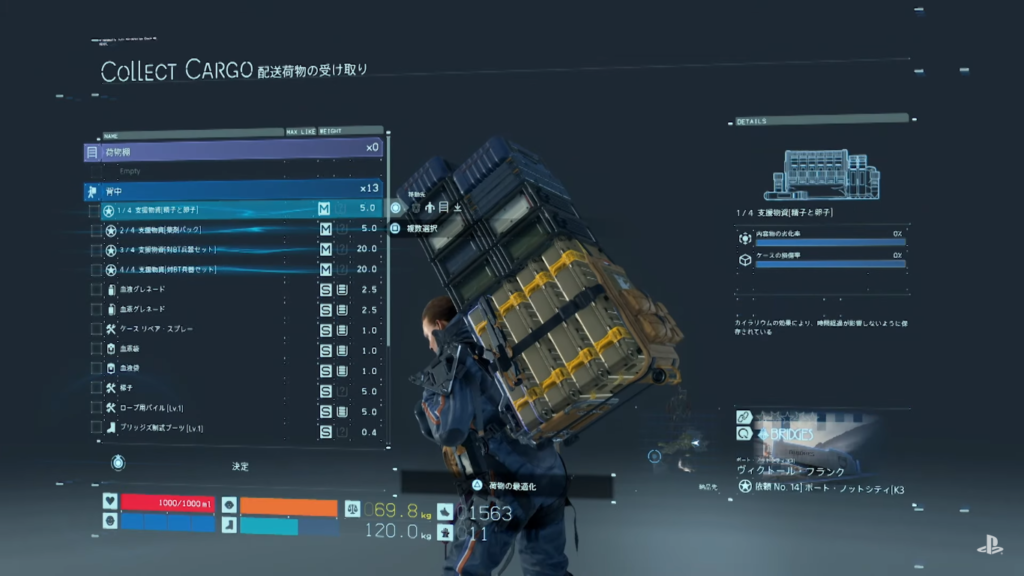 Hideo Kojima kicked off this year’s Tokyo Game Show (TGS) 2019 with a bang, as he took to the stage to show off a whopping 50-minute gameplay demo of his upcoming Death Stranding title. His presentation was arguably the most anticipated of the show, especially as such giants as Sony sit this year out, but it’s safe to say that it satisfied expectations.

It was also massive in both length and content, so we’re here to break down some of the most important elements. Watching the gameplay demo for yourself probably still makes sense, but we’ll try our best to explain things as if you haven’t seen the whole thing yet.

Before we even get to this Death Stranding TGS 2019 gameplay demo, however, there are several pieces of information regarding the story of the title released beforehand via a new ‘Briefing’ trailer that are worth highlighting.

More concretely, this ‘Briefing’ trailer is comprised of a cutscene taken from the game, presumably towards the beginning, that explains why Sam is venturing across the fractured landscape of America in the first place.

The game’s protagonist, Sam Porter Bridges (as played by Norman Reedus), has been tasked with the mission of ‘reconnecting’ the cities of America by incorporating them into the ‘Bridges’ organization’s so-called ‘chiral network’ with his fancy necklace, also referred to as ‘cupid.’

Essentially, by making deliveries to various dwellings, Sam is going to reconnect the nation of America once more, after it reels from the post-apocalyptic event of ‘the Stranding.’

Even so, he’s forced into action as turns out that Amelie has actually been captured by the radical terrorist group known as ‘Homo-Demons,’ and is communicating with Sam and Die-Hardman through a hologram. Sam has some history with Amelie – she refers to ‘the beach,’ calling back to that initial, bonkers reveal trailer – which will no doubt (eventually) compel him to action.

With that, we’re up to speed in terms of the story before diving into the Death Stranding TGS 2019 gameplay demo. The demo starts off with Sam in a Bridges base, where he selects his ‘delivery’ mission and goes to pick his loadout, before plotting out his route through the landscape on a map using a handheld navigation device. 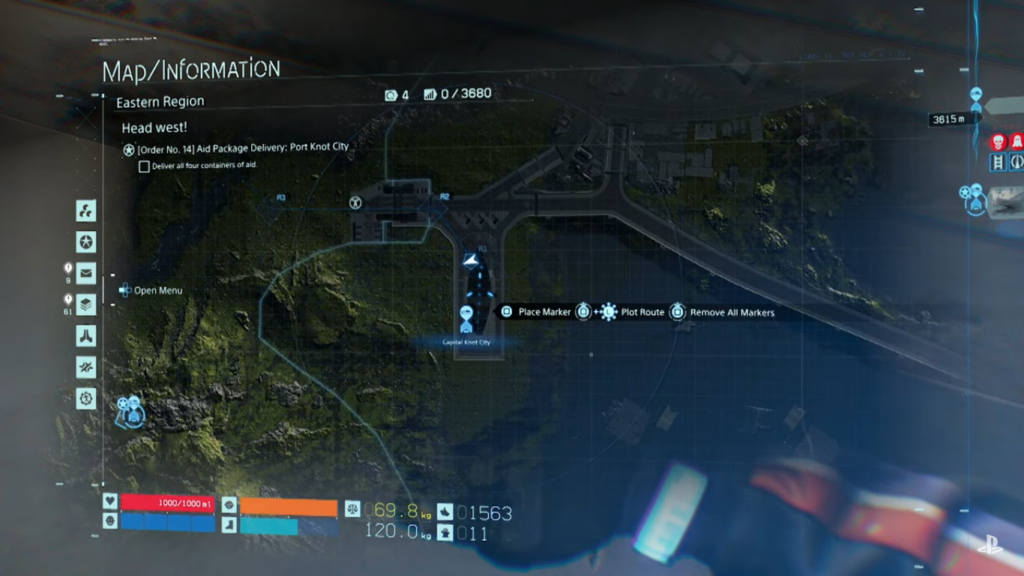 Now, if that’s all starting to sound like your run-of-the-mill open-world game, then you wouldn’t be mistaken. I’ve been saying for a long time that, while Death Stranding might put on bizarre airs with its story, at its gameplay core, it looks to be fairly standard open-world exploration game.

But, as it turns out, I was only right to a certain extent. Kojima is using the best parts of standardized open-world exploration game design, such as a free-form mission structure and traversal tactics, but his imagination and attention to detail invariably make Death Stranding into something a little more unique.

We got our first taste of this in the Death Stranding TGS 2019 gameplay demo, where Sam goes to pick his loadout from what’s available at the Bridges base. There’s a limit to how much weight he can carry (think any Elder Scrolls game) but another factor comes into play: balance.

Depending on where you equip your loadout, for example on your back or on your side, Sam’s weight will shift and his balance will go off-center. From there emerges a high degree of strategy, as players must both pay attention to what they’re carrying, but also to where they’re carrying it; too much on Sam’s back will force him to lean back, whereas uneven weight on the side will force him to the left or to the right.

Players can control this balance by carefully selecting and coordinating their loadout, but the left and right triggers can also be pressed to control it in the moment, as Sam gets knocked off balance by enemy attacks, or from running down a hill.

The fact that Death Stranding will feature combat, as highlighted in the TGS 2019 gameplay demo, seems to have surprised some people. That seems strange to me, as combat had already been revealed back in May, but I can understand the confusion when Kojima insists that this title is more about the ‘rope’ than the ‘stick.’

But Sam will inevitably come across those who prefer the latter over the former as he journeys across the landscape to make his deliveries and reconnect America, so a certain amount of force might be needed in retaliation.

That doesn’t necessarily have to mean going about smacking people in the face or shooting them in the head, however. Stealth is a big part of Death Stranding’s gameplay, which isn’t much of a surprise given how much expertise Kojima has with the ‘tactical espionage action’ genre, but it’s still an interesting tool in the player’s arsenal that can be used in different ways.

The first instance of this that we see in the Death Stranding TGS 2019 gameplay demo is when Sam comes across a terrorist camp, which contains within it all sorts of useful items and resources.

By depositing Sam’s equipment and luggage outside of the camp and sneaking in, even taking a guard out The Phantom Pain-style, Sam is able to snag some of those goodies and even take revenge for other players – but more on that later.

The second stealth instance that we see in the Death Stranding TGS 2019 gameplay demo is when Sam has to sneak past some BTs (Beach Things) – those pesky extra-dimensional beings that have been a part of the title since way back when.

Using the power of the BB (Beach Baby), Sam is able to see the ghostly silhouettes of these enemies, but only when he is stationary. The BTs also can’t see Sam – they’re on different ‘sides’ – so they’re forced to rely on sound. While that means that the player has to pay attention to things like breathing and footsteps, it also opens up a fair amount of possibilities for distracting these enemies with sound and getting a leg up on them.

But both of these situations end up turning sour – especially the second, as Sam is caught by the BTs and dragged away to a boss encounter – and the player is forced to engage in combat.

These encounters let you lose on Death Stranding’s arsenal of weaponry, including guns, grenades and even exoskeletons, but it’s quite clear that these encounters aren’t the main focus of the game.

Fighting the massive BT-beast enemy is slow work, as it takes lots of hits and charges towards you, which clearly sets it up as more of a punishment for failing a stealth section. Most of the time during the terrorist combat encounter is also spent running away, as their numbers could easily overwhelm you.

So while combat does exist in Death Stranding, it’s quite clear from the TGS 2019 gameplay demo that it only really exists as another gameplay tenet alongside stealth and exploration. This, in turn, ties back to Kojima’s insistence that this game is more about the peaceful, cooperative ‘rope’ than it is the destructive, violent ‘stick.’

That’s not the only way that this idea of the ‘rope’ will manifest in Death Stranding, however. Much like other interconnected but largely single-player games such as Dark Souls and Journey, players will actually be able to interact with each other and cooperate – if only indirectly.

Death Stranding’s interconnected online nature starts once an area is connected to the ‘chiral network’ after Sam makes a successful delivery, allowing you to see what other players have left behind in the world.

This starts small, such as marker telling you where someone slept or took a piss, and gradually gets larger and larger, as you begin to discover ropes, ladders, and even shelters and safehouses that other players have built.

You’ll, of course, be able to use all of these, even help build them if it’s a bigger structure, which is part of the way in which Kojima wants to encourage cooperation between Death Stranding players.

There’s also a ‘like’ system in place that will allow players to show their appreciation for things other players have built or left behind, which is reminiscent of the soapstone rating system in Dark Souls.

Boss battles against that giant BT-beast are also made a little easier with the help of other players, as seen at one point during the gameplay demo where Sam calls for help and other players come to his rescue by depositing grenades and other supplies in the boss arena.

The fate of other players at the hands of enemies will also have a tangible effect on the game world, as death at the hands of the BT will open up a giant crater in the landscape, and as the terrorist groups in the area hoard stolen items for you to snag, in turn.

Even so, I’ve played a lot of Dark Souls, so I know that this online system won’t exactly be perfect. Whether this system will be as intuitive as Kojima envisions it to be, or simply full of trolls, remains to be seen.

That being said, it wouldn’t be an overstatement to call the concept of the ‘rope,’ as symbolized by this online system, the entire thesis of Death Stranding – as Kojima calls it, the ‘strand’ is the most important thing of all.

This TGS 2019 gameplay demo shows that, while combat may be a part of the game, it’s but one portion of the overall gameplay alongside the highlighted stealth and exploration elements, with the survival elements that were highlighted in 2018 added in for good measure.

What’s more is that the story of the game, as shown in both the ‘Briefing’ trailer and the gameplay demo itself, ties very closely into the theme of ‘connections’ and positive relationships with one another.

I’m not just talking about Sam’s grand mission, either; even the small parts of Death Stranding stand as a testament to the power of human kindness and compassion.

One beautiful moment in the gameplay demo comes when Sam receives a harmonica as a reward for returning a lost package to a ‘Musician’ NPC and connecting him to the chiral network.

Tired, Sam sits down amongst the desolate scenery and plays a tune – a haunting tune, but one that was only made possible because of the kindness of others.

Hideo Kojima and Kojima Productions will return to TGS 2019 this Sunday, promising more information on the hub world ‘bases’ of the game, so definitely look forward to that. In the meantime, you can check out the full Death Stranding TGS 2019 gameplay demo here (Japanese only). Death Stranding will release exclusively for PlayStation 4 on November 8.