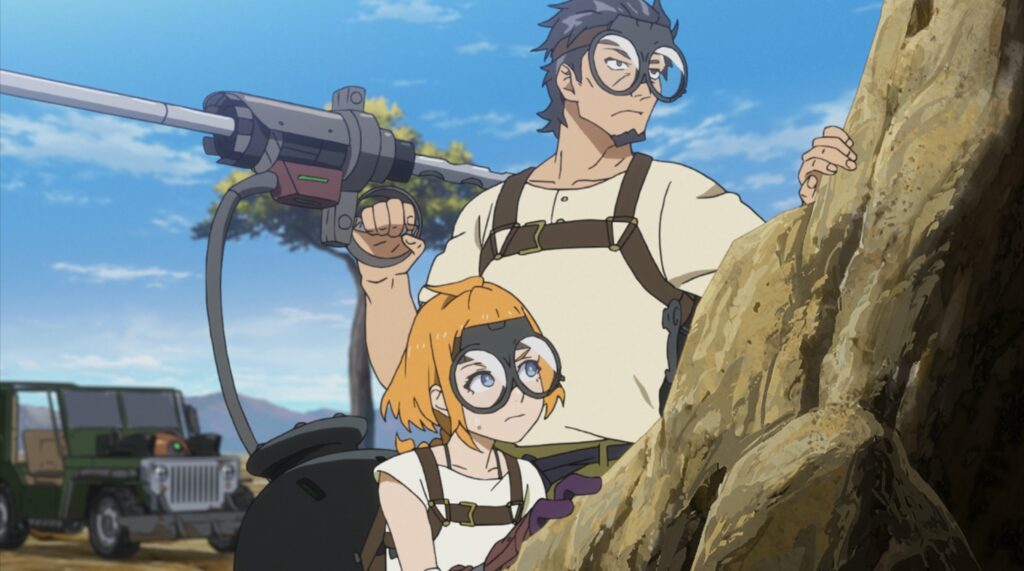 Deca-Dence episode 2 was a shock to the system that ripped apart any preconceived notions people had about the series going into it. What started as nothing more than a well-animated but generically-written post-apocalyptic tale with more than a few similarities to Mortal Engines was transformed by the revelation that the life-or-death survival we were drawn in to was nothing more than a game for the Tankers who enjoyed it day-to-day. This left Deca-Dence episode 3 with a lot more questions that needed answers.

The capitalist hellscape that is the world of the Tankers, where players work for the benefit of the top brass in the slim hope they can save their souls from deletion either through their work or their ability to entertain the masses in their game on Deca-Dence, was still left shrouded in mystery. Plus, why had humans like Natsume get trapped in this entertainment arena in the first place? 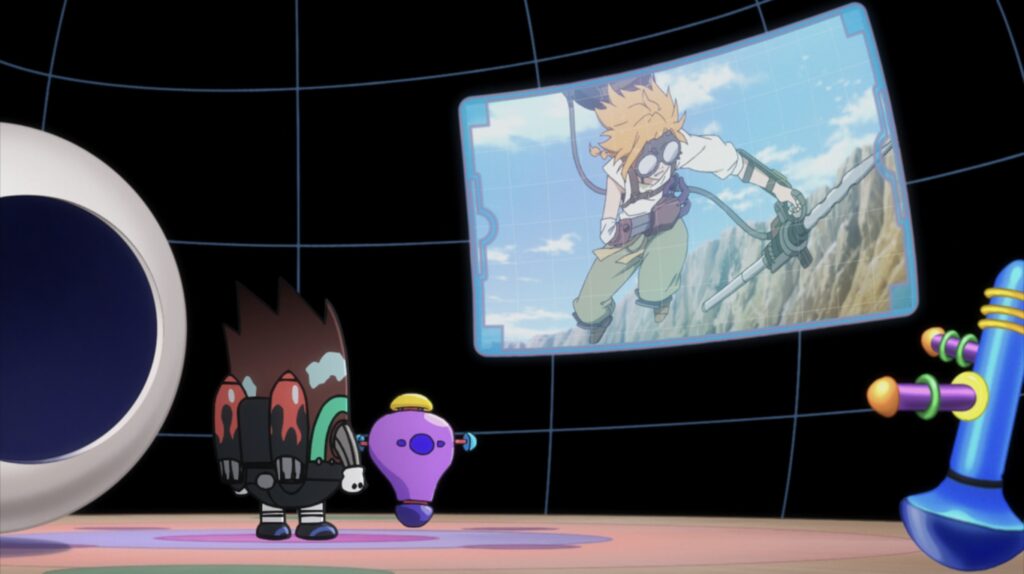 After 2 episodes focused primarily on the world of Deca-Dence, episode 3 lasers in on Kaburagi’s internal conflict about the concept of eliminating bugs and ‘flaws in the system’, all while indulging in developing his relationship with Natsume, a bug herself. In this regard, the episode spends most of its time showing the pair training together to help Natsume learn the ropes, with only a brief historical look at how the world reached its current state at the midway point.

Not that this is a bad thing. Anything but, in fact. Over the course of their training, you see how Kaburagi’s mindset shifts from a medial curiosity in the lifestyle of a bug to a love and care for their wellbeing as the parental figure Natsume always lacked. As the episode goes on the increased ease Kaburagi has simply being in Natsume’s presence is visually conveyed to us through their jokes, laughter, and eventually, Kaburagi’s assistance in upgrading Natsume’s mechanical arm. 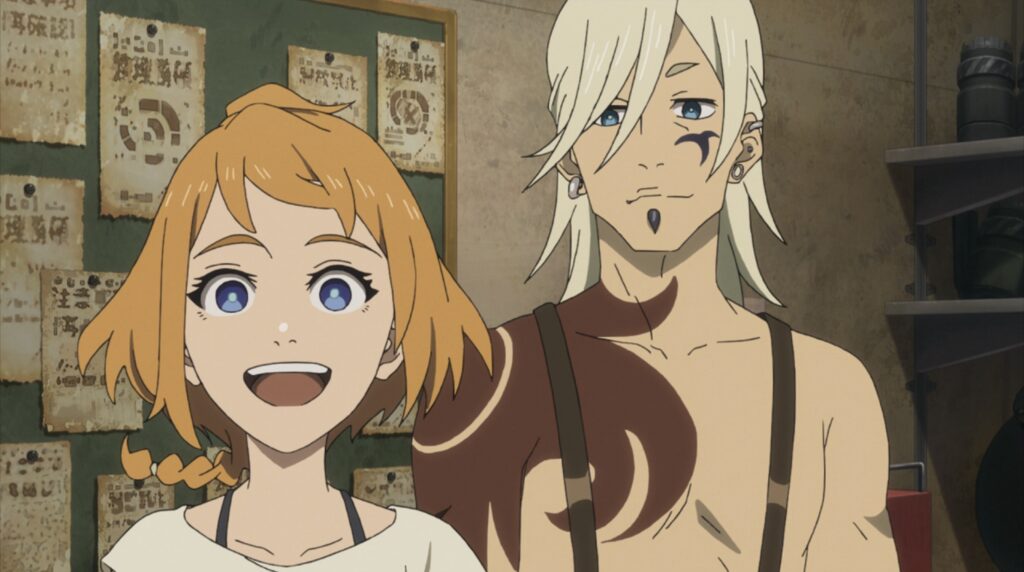 There’s more to this relationship than just a heartwarming father-daughter dynamic, and its learning more about the world’s past that reinforces this. When I say this world is a capitalist hellscape I mean it, and Natsume is the disrupting force that Kaburagi wants to use to blow it all up.

As it turns out, the reason why the world of Deca-Dence is how it is is because of air pollution reaching lethal levels. Cyborgs had already taken over much of the work humans would do, and humans had destroyed their own world. At this point, the Solid Quake Corporation in charge of these cyborgs bought the rights to humanity and turned Eurasia into the entertainment facility of Deca-Dence. Governance has been replaced by the computer system Kaburagi reports to that dictates the rules all should follow for the purposes of order, control and harmony, eliminating free will. 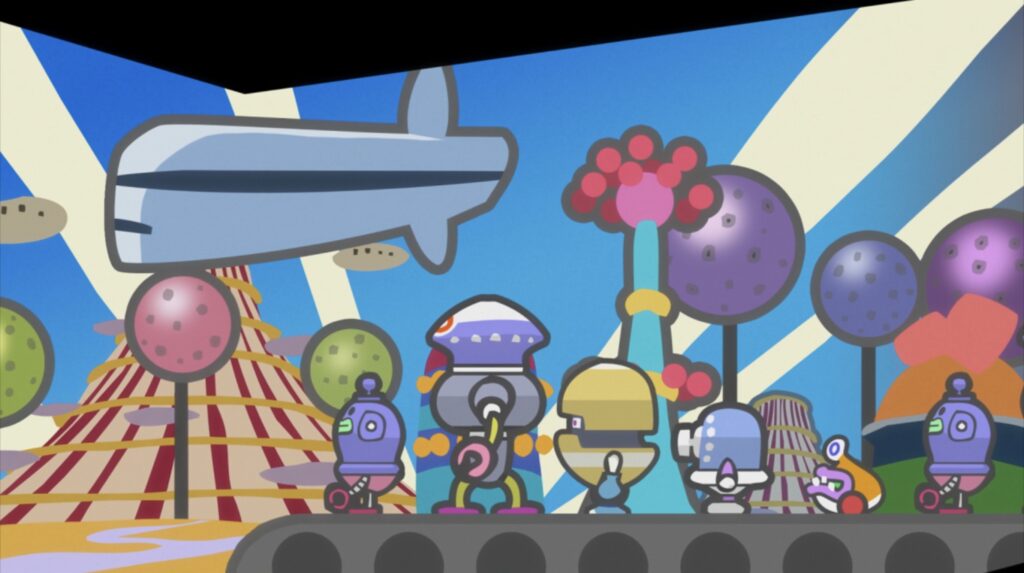 The cyborgs work for Solid Quake, creating wealth for bosses who then charge the cyborgs to use their own earnings to buy back the necessities they helped make, all while those who speak out are terminated. I call it a capitalist hellscape, but much of this world’s construction is just a reflection of our current reality, and it’s not even like much exaggeration was needed to transform it into the circumstances shown here.

It adds an intriguing extra element to their relationship. While their personal love for one another is great, Natsume’s entire existence is a middle finger to the establishment, and Kaburagi’s realization that bugs don’t need to be destroyed not only blossomed this relationship but turns Natsume into the potential key to blowing it all up. 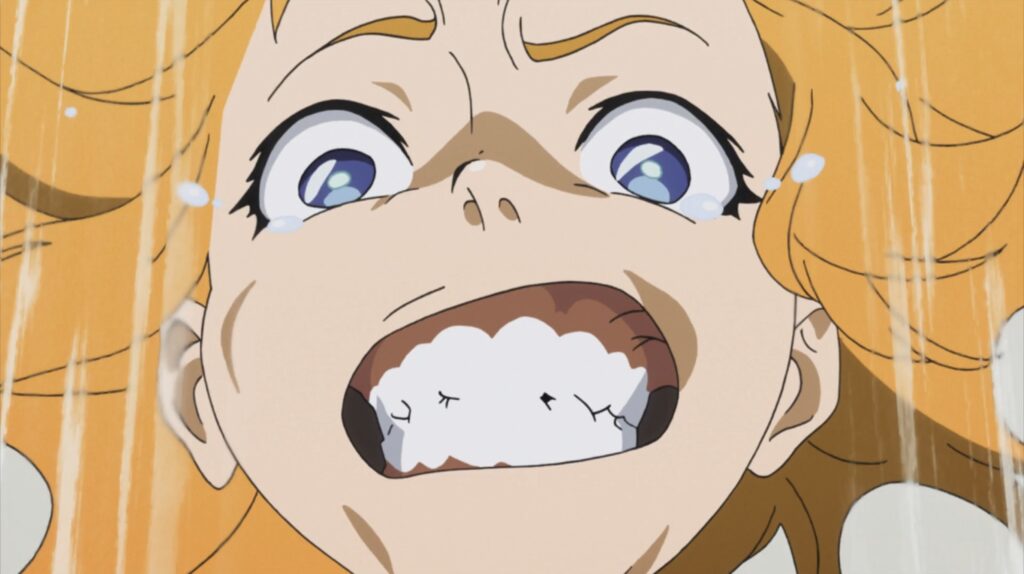 I could compliment the once again excellent animation or my growing love of the differing aesthetics, but it’s this story that grabs me most.

Last week I said that Deca-Dence had suddenly become the most exciting new show of the season with its plot twist. If it continues in this direction, there’s nothing stopping me placing this show as being the best anime of the season, and perhaps even 2020 by the time the year is out.