The Demon Girl Next Door Gets Second Season, English Dub 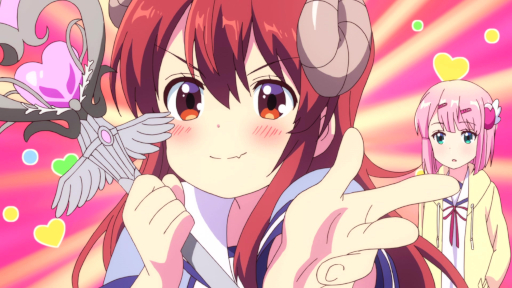 The ridiculously cute and silly anime series The Demon Girl Next Door will receive a second season.

In addition, Sentai Filmworks began streaming an English dub of the first season of the comedy series on its HiDIVE service on Aug. 27.

According to reports, ABEMA will show first season episodes of the series online on Sept. 5. Niconico will stream the episodes on Sept. 13.

The Demon Girl Next Door (Japanese title Machikado Mazoku) tells the tale of a demon girl who becomes friends with a magical girl.

The two schoolgirls are opposites in many ways. Demon Yuko “Shamiko” Yoshida is a weak girl from an extremely poor family. (Her family has some sort of poverty curse.)

However, shrine maiden and magical girl Momo Chiyoda is both apparently rich and powerful.

Originally, Yuko was supposed to have defeated Momo so she could eliminate her family’s curse, restore its honor, fulfill her destiny, and so on.

Unfortunately, Momo is way too strong for Yuko  — or put another way, Yuko is too weak.  The two end up as unexpected friends instead.

Incidentally, Yuko was given the task by her ancestor, Lilith, who lives in a demon statue. Lilith can talk to Yuko in her dreams. She also gains the ability to possess Yuko’s body.

The series parodies typical magical girl and other anime conventions.

The Demon Girl Next Door is based on a yonkoma (four-panel) manga by Izumo Ito. The manga is published in Houbunsha’s Manga Time Kirara Carat.  Machikado Mazoku is Ito’s first manga series.

The first 12 episodes of the anime series ran from July to September of 2019.

The English dub of the series features Monica Rial as Yuko (Nano in Nichijou). Genevieve Simmons is Momo (Kanata in LIttle Busters!).