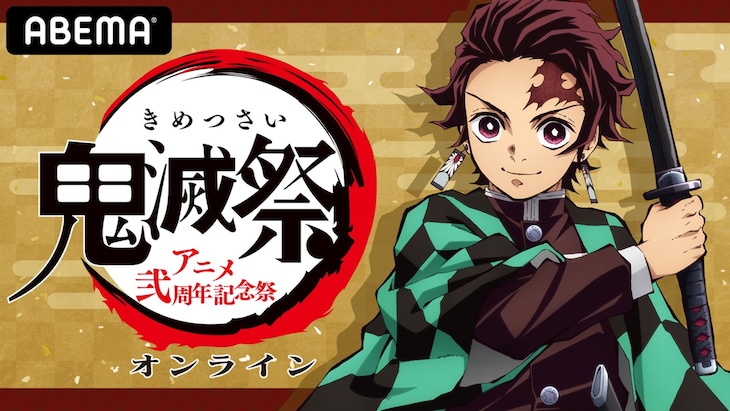 An upcoming Demon Slayer: Kimetsu no Yaiba Valentine’s Day event promises to be a big day for fans of the franchise, with Valentine’s Day-themed short episodes and new information on the future of the anime.

Originally scheduled as a 2-day event for fans of the mega-popular series at Makuhari Messe on 13 and 14 February, the planned ‘Kimetsusai’ Demon Slayer event will now be replaced by an online broadcast set to be streamed live on ABEMA TV at 8 p.m. local time on Valentine’s Day. Voice actors for Tanjiro, Nezuko, Zenitsu, Inosuke, and Rengoku will come together for a live broadcast that celebrates Demon Slayer’s second anniversary and will share new information about the anime. They will also broadcast the final episode of a Valentine’s Day-themed series of short anime episodes set for release the same day.

These short episodes continue the Kimetsu Gakuen alternative universe storylines featured in the TV anime as short post-credits skits for episodes 14 and 17 of the anime. In these skits, the characters were re-imagined as students all attending the same school, something the shorts plan to expand upon. In these new shorts, it’s Valentine’s Day at the Demon Slayer school, and the holiday of love is being felt all around. The first 3 episodes will be uploaded to the Aniplex YouTube channel at 10 a.m., 1 p.m. and 4 p.m. on 14 February, with the final episode premiering during the live stream.

More exciting than these shorts is the promise of new information. This announcement could technically be anything, and at the risk of dampening expectations, it doesn’t necessarily mean that we’ll learn more about how they plan to adapt the rest of the Demon Slayer manga at the event. The announcement could refer to a future movie (the success of Mugen Train makes future movie adaptations of the series a tantalizing proposition for all involved in the production) or a second season of the TV anime, but it could just as easily refer to an attempt to capitalize on the franchise’s success by creating a spin-off anime series set within the universe.

I guess we’ll need to tune into the Demon Slayer Valentine’s Day event itself to find out!