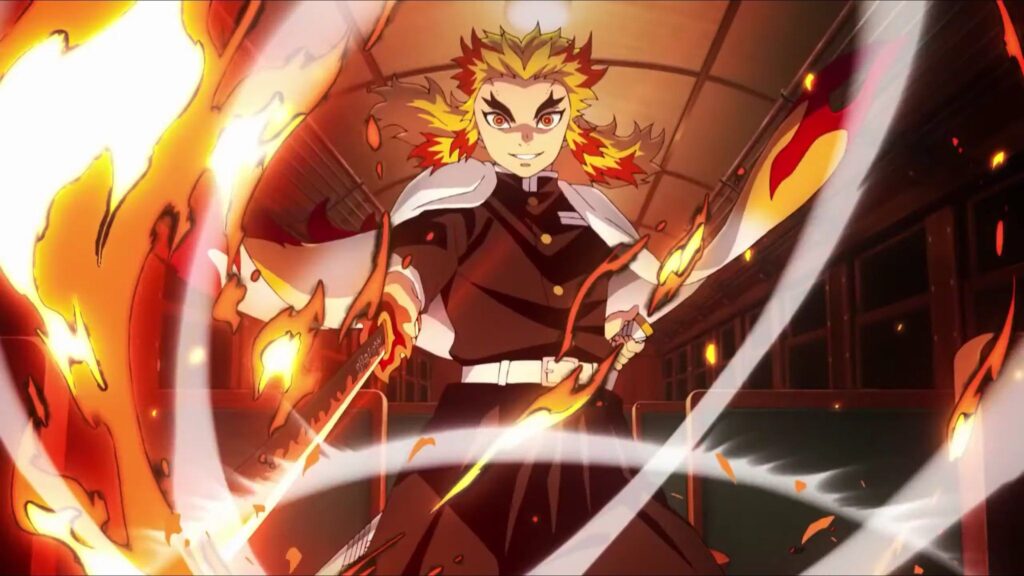 It’s difficult to know where to start a review of Demon Slayer: Kimetsu no Yaiba The Movie: Mugen Train (except to say that the movie could do with a shorter and far better English title). Realistically, most of the people reading this have seen the movie or already know if they’re going to see it or not, and likely know enough about the Demon Slayer franchise to understand this film acts as a theatrical continuation of the hit 2019 TV series that sparked a phenomenon.

The conclusion of this review is similarly ordinary and expected. If you’re a fan of the franchise, this is more of the Demon Slayer you love on the biggest screen possible. You won’t be disappointed, as ufotable delivers another superb showcase of their animation talent, while the story continues the narrative of Tanjiro and Nezuko right where the series left off. If you haven’t seen the series before, there’s still enough here to enjoy, but certain moments and emotional beats will be lost on you.

Instead, let’s discuss the film as a work of adaptation. This is the first time that Koyoharu Gotouge’s manga has made the jump to theaters, with an arc of the story that’s short enough to be easily contained and adapted into an under-2 hour runtime. This is also the first time that Shonen Jump has created a movie that adapts a manga partway through, rather than creating a self-contained spin-off similar to the numerous One Piece or My Hero Academia films. Movies are now being dragged into the serialized storylines of anime.

Does Demon Slayer The Movie Mugen Train work as a movie adaptation as opposed to a TV adaptation, and does the film take advantage of its choice of medium to enhance the story being told and justify the decision to turn this story arc into a film (beyond the bucketloads of money it earned)?

The movie adapts the Mugen Train arc of the manga and follows up immediately from where the anime left off back in 2019. With most of the Lower Six demons of the Twelve Kizuki under Muzan Kibutsuji murdered for their incompetence following the failure of Rui, Enmu is given one final chance to prove himself. Tanjiro, Inosuke, Zenitsu, and Nezuko come into contact and battle with him, when they are asked to assist the Flame Hashira Kyojuro Rengoku on a mission to investigate a train where many people are going missing.

As a result, you’re dumped straight into the action, with only a brief anime-original scene involving the Head of the Demon Slayer Corps providing any sort of easing into the action. Even then, within minutes we have Tanjiro and Rengoku being introduced, and little more time has passed before we’re already in contact and conflict with Enmu and those aiding him.

This rushed introduction makes sense when it only acts as the next chapter of a weekly serialized manga or the next episode of a TV series, but when there’s a large break between story moments such as the 1+ year gap that existed between the TV anime ending and the movie, it feels jarring. The issue primarily exists in the opening moments, as once the movie gets underway in full, we aren’t reliant on other storylines to drive the film’s plot twists, but it makes for a rough introduction.

That is, until the second half. Demon Slayer: Mugen Train hurts its status with new fans coming into the film without knowledge of the story before this point by refocusing and shifting the central conflict. The film at this point is reframed from a story about Tanjiro to being a story about Rengoku, without the context within the film being given to understand why this shift is taking place. 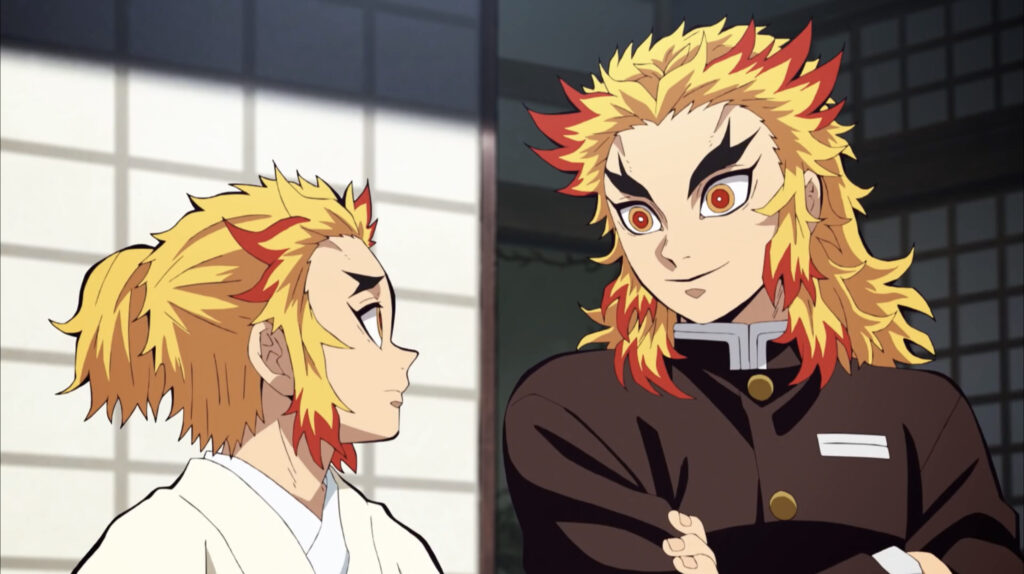 While Rengoku is ever-present throughout the movie, he never feels like the central focus during much of the first conflict. Everyone is working together, but with a lot of time being spent in the trailer’s key scenes featuring Tanjiro’s family, it’s another flashback to his pre-Demon Slayer tranquility that emphasizes Tanjiro’s growth and sacrifice with a strong stab of emotional pain. Even with flashbacks for Rengoku’s past, it never feels like a focus.

These flashback scenes become more important in the second half of the film when Muzan’s influence over the demons and their joint mission to destroy the Hashira and the Demon Slayer Corps is rather abruptly brought to the fore. This re-introduction of the story comes suddenly and without warning, and without even an indication that they had been near the action we had been enjoying before that point. While the resulting battle is the film’s emotional peak, it is still a shame that this moment makes the film more accessible to many audiences that could otherwise enjoy a visual and storytelling spectacle deserving of the records it broke.

Because, without a doubt, the movie is taking advantage of the expanded budget and scope provided by a jump to theaters. Demon Slayer: Mugen Train repeatedly matches and, at times, surpasses the impressive animation that captured the imagination of fans of the TV anime. The delightful blend of 2D and CG animation remains, but where budget and time was saved by using an increased number of CG models for crowd sequences and certain moments, this is now fully-2D animation that is warped as the camera moves around it. 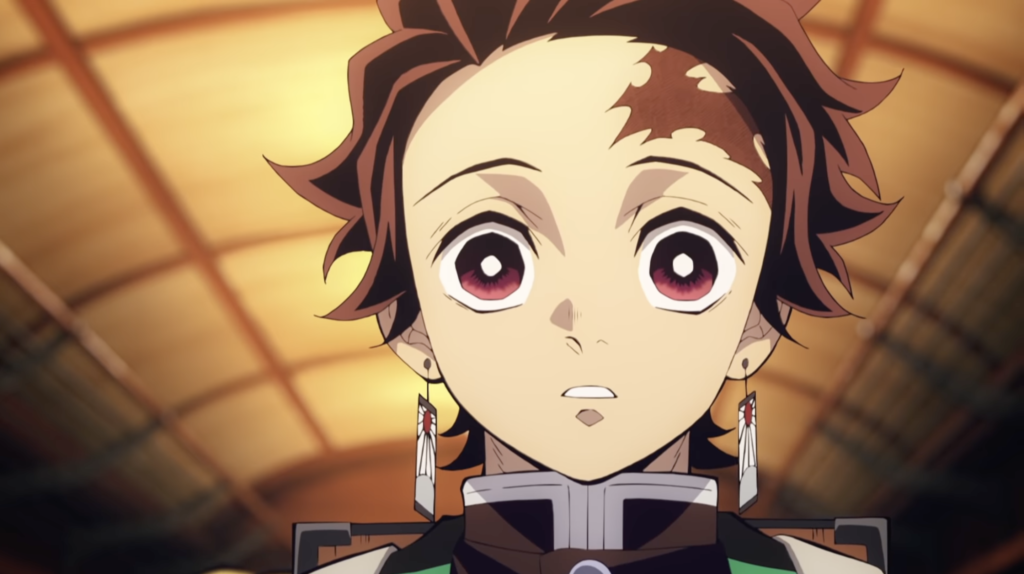 Not only does it look cleaner, but the results are even more impressive when breathing techniques and the like are used. The reason the second half of the film is enjoyable even to those unfamiliar with the TV series is that, as a spectacle of animation craft, musical explosion, and emotions, it is one of the most gratifying theatrical experiences of the past 12 months.

But it is still a moment that hurts the experience of Demon Slayer: Mugen Train. Even a single additional scene showing Muzan watching the action from afar or discussing it would have enhanced the second half of the experience immensely by introducing the conflict to new fans without inconveniencing long-standing fans.

As it stands, it’s easy to understand why this film became the record-breaking success it has been. It takes a pop-culture phenomenon to new heights with style. While as a work of adaptation and as a self-contained story it feels too tied to the beats of the wider narrative beyond this arc to work on its own even if it can be enjoyed as such, the film takes advantage of the medium where it matters: in the animation. If this is your first experience back in a theater since COVID, it’ll be worth the wait.

Demon Slayer: Kimetsu no Yaiba The Movie Mugen Train is out now in theaters worldwide, and you can find out more over on the film’s official website.