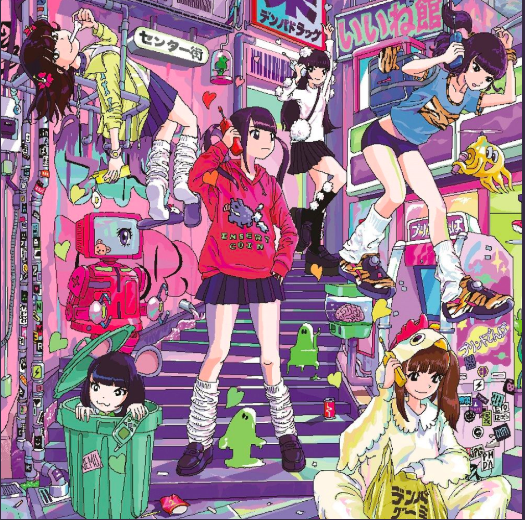 Idol group Dempagumi.inc has changed a lot in the last two years. The high-energy pop outfit has seen two members present with the group during the years where they went from Akihabara undergrounders to a mainstream force. Moga Mogami left Dempagumi.inc in the summer of 2017, while earlier this year Yumemi Nemu graduated. Alongside these departures, two new members — Rin Kaname and Nagi Nemoto — joined the project at the very end of 2017.

Despite all these shake-ups regarding who performs in Dempagumi.inc, the group still can conjure up the same mind-melting energy that turned them into a mainstream presence. They bring this classic approach to their latest single, the symbol-abusing “Ko♡Ushi♡Tora♡U♡Tatsu♡Mi♡.” Watch the video for that one below.

Perhaps the highest compliment one could give to Dempagumi.inc is they have made the idea of unpredictability feel somewhat predictable. For many idol groups, a video pivoting from the members falling asleep in front of computers to dream-inspired sets to a dance number with a giant costumed cat would be pretty nutty. For Dempagumi, this is the norm. Same goes for the music, moving from a baby-toy-imitating intro of them making animal noises to a more skippy section to breaks for something approach hypnosis.

This might be what’s expected from Dempagumi.inc, but the pinballing approach to pop also never feels tired. For all of the turns present in this Zodiac-referencing number — just wait until you get to the heartfelt breakdown late — the group never lets this one go totally off the tracks, nor do they simply go hyper-speed for the sake of it. Everything works together, and they leave plenty of space for the single’s catchiest parts to stand out. Regardless of how the makeup of the group changes, they’ve stayed true to this formula, and I’d dare say they won’t be changing it any time soon either.