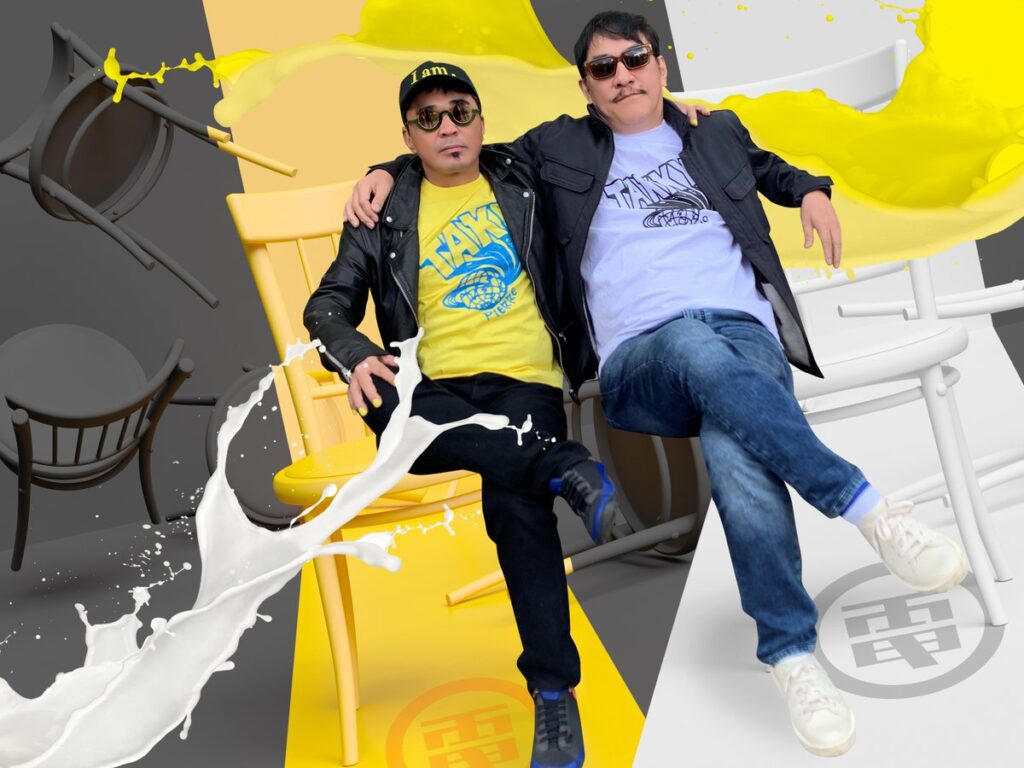 If you live in the US, there’s a good chance you’ve never heard of Denki Groove, and that’s not your fault. Not that Denki Groove was ever concerned with popularity or making anyone happy from the start. Denki Groove endeavored to craft experimental grooves and lyrics to parody and push the limits of 90s music, and for the most part, they succeeded.

Though relatively unknown in America, their renown sits comfortably in Japan and abroad in Europe, particularly in Germany among EDM circles, known for hits such as Niji, Shangri-La, Man Human, and more.

Who Is Denki Groove?

Denki means ‘electricity’ in Japanese, and true to form, they deliver a shock to the listener, whether in the form of funky, catchy experimental grooves or their playful, somewhat irreverent lyrics. Unsurprisingly,  there is a heavy focus on electronic music, incorporating house, funk, disco, rock, and pretty much whatever else they want.

Denki Groove’s principal members are Takkyu Ishino and Pierre Taki, a quizzical pair with backgrounds as interesting and versatile as the music they create. Ishino got his start as a late-night DJ for a popular radio show in the early ’90s, and Taki has gone on to feature in a variety of film and TV projects, including the live-action adaptation of Attack on Titan, while Ishino has continued to make music on the side.

They’ve taken amicable breaks from the project, spending more time on solo ventures before coming back together. They’re still active to this day, dropping “Man Human”, which was used as the opening for Devilman Crybaby, as recently as 2018.

Rise to Popularity and Influences

These children of the new wave music movement of the 60s and 70s got their start in 1991 with their debut album Flash Papa, not really hitting their stride until their 1993 Vitamins album.

The intro track of Flash Papa (1991), “We Are,” makes it clear that it’s a 90’s album, borrowing heavily from 90’s hip hop minus the coherency – the birth of Denki Groove is heralded in declarative screams as if say to “We are here!!”

And there’s a sense of fun present from the start that’s present in most of their works. Ishino has said Afrika Bambaataa, a key pioneer of the electro-hip hop movement, was the catalyst in fusing New Wave and hip hop in Denki Groove’s creations.

Denki Groove was also heavily inspired by experimental musician and composer Ryuichi Sakamoto’s band Yellow Magic Orchestra, and a fair amount of their work has been a playful homage to the sound, but eventually, they branched out into their own sound.

They have also claimed to be inspired by Telex, Kraftwerk, and German new wave, which is interesting considering that’s where their non-Japanese following is concentrated.

Denki’s influence on Japanese music can be found in the most expected yet unexpected places. Their 1995 single Niji (Rainbow) is a calming dreamscape of repeating synths amongst a backdrop of sweeping sounds that give the listener a sensation of floating while lyrics about the transience of beauty in the form of a rainbow interspersed without. It was also used as an insert song for the anime Eureka 7.

However, the song immediately brought another song used in a film about dreams to mind – Susumu Hirasawa’s “Mediational Field” for Paprika (2006).  Another hit, NO, from Vitamin (1993) similarly evokes the opening for Paranoia Agent.

Quite fitting for songs composed to illustrate a feeling of transcending reality. It also gave me heavy Sonic CD vibes, particularly tropical-inspired Palmtree Panic, though that’s no surprise, as this kind of electro-house sound was contemporary in Japan.

Grooves and funk also feature heavily in their sound, and they’re not afraid to use it whenever they see fit. VOXX (2000) was released at the turn of the Millenium, yet seems to almost flagrantly throw us back to the 70s in disregard for the times because why the heck not?

Flashback Disco is a modernized house groove with clear funk and disco influences, including synthesized interjections of  “ooh-ooh!” and disco-style string motifs. This is also apparent in their 1997 hit Shangri-La, with the addition of 70s flute riffs and doubling down on the strings, all while retaining that classic 90s house sound.

Though their music is very reflective of the times, Denki Groove is far from standard fare and has held up pretty well. If you have an ear for the nostalgic and the funky (or you’re just a fan of synthwave and future funk), definitely give them a shot.