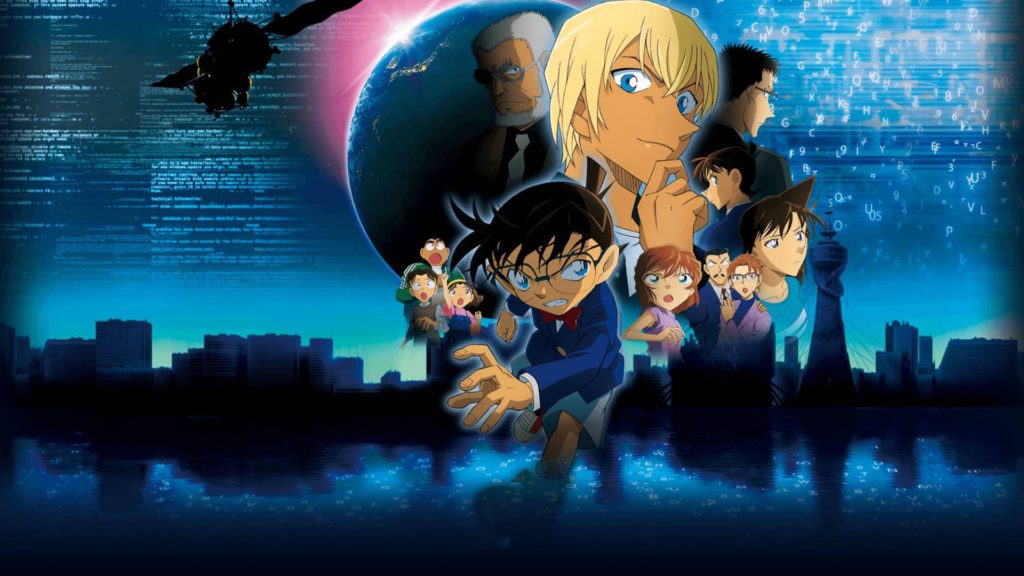 Gosho Aoyama’s long-running mystery series ‘Detective Conan’ is already an iconic property in Japan and East Asia in general, but it has been doing exceptionally well at the box office with its feature-length films recently; this year beating it’s box office record once more for six years in a row.

The news came in after six weeks at the box office that the twenty-second movie in the franchise, ‘Zero’s Executioner,’ had earned a whopping 7.2 billion yen, beating the previous movie’s record of 6.87 billion. The franchise has been on an upward trend for years, beginning with movie seventeen – ‘Private Eye in the Distant Sea’ – which beat the previous movie by a fair margin. From then on, box office receipts for the movies begin to climb gradually, only to jump up by a billion yen when movie twenty, ‘The Darkest Nightmare,’ earned 6.33 billion at the box office.

The series has always been an important property in modern Japanese popular culture, but this recent success is surprising, to say the least. Just looking at the length of the series seems to contradict the movies’ apparent success at the box office; the manga recently reached 1000 chapters, and the anime recently reached its 900th episode – surely the sheer length and multitude of content needed to get into the series is daunting, and would thus put people off the franchise’s movies?

The producers of previous movies were seemingly aware of that fact and chose to develop them as stand-alone adventures that anyone could enjoy no matter how knowledgeable they were about the series. But precisely because of this, and other factors, these early films weren’t particularly good – in fact, many fans considered the movies as not canon up until recently because of how poorly put together they were in comparison with the main series. The writing did slowly improve over the years in response to this criticism, eventually culminating in ‘Dimensional Sniper’ (movie eighteen) and ‘Sunflowers of Inferno’ (movie nineteen) being particularly excellent stand-alone adventures, but there was still something missing.

It was only once the movies began to cover more of the actual canon, starting with The Darkest Nightmare (movie twenty), that the series began to break it’s box office records by larger margins. Nightmare explored a mystery pertaining to the Black Organisation, the main antagonists of the series, featuring all of the members that had been introduced up until that point, as well as a multitude of CIA agents – something I can’t imagine a casual viewer understanding without prior knowledge. Even so, tying the movie into the canon and allowing the movies to move the plot forward, even if only slightly, ultimately gives them much more meaning to hardcore fans – the type of fans who will buy multiple tickets.

But the cementation of Conan into the Japanese popular consciousness – even if only the base elements of the series – also means that it has become much easier for Japanese theatergoers to understand the basics of each film, even if they have never watched or read it. You’d be hard-pressed to find a Japanese person who isn’t aware of Conan’s trademark voice-changing bowtie or his classic catchphrase, “there is only one truth” – which only reinforces the series’ iconic place in popular culture.

It’s because of all this accumulated that it’s not very surprising then that ‘Zero’s Executioner’ would quickly beat the previous movie’s record. It features one of the most popular characters right now in Amuro Toru, and also heavily links in with the current canon of the series as well as foreshadows future events. Furthermore, theatergoers feel much more comfortable in going to see the film without any prior knowledge because of Conan’s iconic place in pop culture. I personally found the film to be very refreshing, pushing the franchise and particularly the feature film series in new directions with its thriller-based plot instead of a straight-forward mystery.

That being said, it remains to be seen whether the franchise can once more top it’s box office record next year. Kaitou Kid is back in what seems to be a standalone mystery, which ought to satisfy the fandom as well as draw in more casual viewers, but considering that the franchise has always done best at the box office when tying its films into the canon, much remains to be seen.