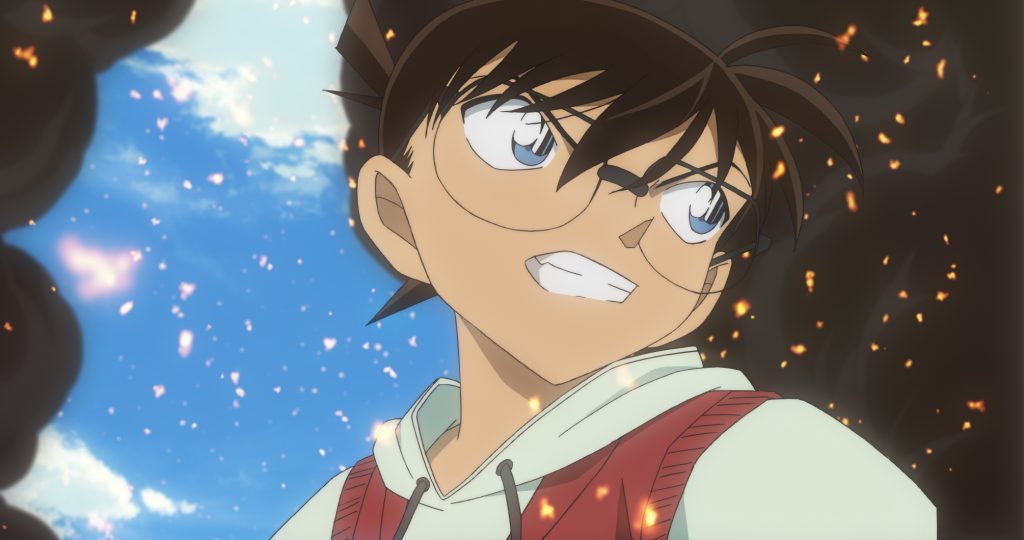 Taking place throughout Kyoto and Osaka, the story’s 21st chapter is a “Chained Love” mystery dyed in red. Japanese Comedian Daisuke Miyagawa and popular actress Riho Yoshioka will both have roles in the film as special guest actors. Additionally, singer Mai Kuraki will contribute her 21st song to the series with main theme Togetsukyō ~Kimi Omofu~. Details of the film’s story can be found below: A mysterious bombing has occurred at Nichiuri Television Studios, causing wide-spread panic amidst the Satsuki Cup; a competition for traditional card game Hyakunin Isshu karuta, which was being filmed in the studio. Both the ‘Great Detective of the West’ Heiji Hattori, and his childhood friend Kazuha Toyama were left behind, but protagonist Conan manages to save them just in time. With all signs pointing to a terrorist attack, questions regarding the attack’s mysterious nature leave both Conan and Heiji with an insuppressible sense of dread.

Amidst the chaos of the explosion, Conan encounters a woman who insists that she is Heiji’s fiancé. Her name is revealed to be Momiji Oka, and she is a high school karuta champion. Curiously, Kazuha is set to face Momiji in a Hyakunin Isshu match, so she begins to train daily with Heiji’s mother Shizuka, another skilled karuta player.

Whilst this was all occurring, the current Satsuki Cup champion was murdered inside their old home in Arashiyama, Kyoto. The security footage recorded at the scene reveals a person who appears to be Momiji. Strikingly, several karuta cards were also found scattered around the victim’s body. Just what is Momiji’s connection to this incident? With the help of both the Osaka and Kyoto police departments, Conan and Heiji set out to investigate the two incidents, and how the Satsuki Cup connects them. Before long, their investigation brings even more mysteries to the surface. All is bound behind the strings of Hyakunin Isshu. Osaka and Kyoto; two incidents connected wound together as one – the cogs of fate have begun to turn!

As a first for the movie series, detective novelist Takahiro Okura wrote the screenplay. The remaining staff and cast include the directorial talent of Kobun Shizuno, with music by Katsuro Ono. Protagonist Conan Edogawa is voiced by Minami Takayama, while Ran Mori is voiced by Wakana Yamazaki and Kogorou Mori is voiced by Koyama Rikiya. Heiji Hattori is voiced by Ryo Horikawa, and Kazuha Toyama is voiced by Yuko Miyamura. In a similar fashion, the remaining cast members will reprise their roles. Images from the upcoming film can be found below:

Further information on the upcoming film can be found via the official website for Detective Conan: The Crimson Love Letter, here.