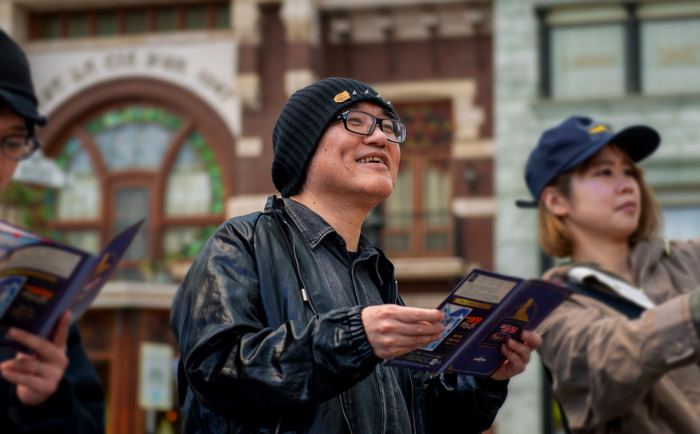 Universal Studios Japan is pretty stacked with Japanese pop culture-themed attractions this year, but the long-running Detective Conan franchise dominates the lineup. This shows how much of an important property Conan has become for Japan in recent years, especially with how well its movies have been doing recently. Given this, it’d be a bit of a waste if the series’ creator, Gosho Aoyama, didn’t go and see the fruits of his creation’s success in checking out this year’s Conan attractions at USJ.

If you weren’t already aware, there are three Conan attractions at USJ this year: the ‘Mystery Challenge’ stamp rally, ‘Mystery Restaurant’ themed eatery/interactive performance, and the ‘Detective Conan the Escape’ escape room. All three are themed around the franchise’s latest movie, Fist of the Blue Sapphire, with the escape room in particularly acting as a sort of ‘prologue’ to the events of the film.

Aoyama arrived at the park and went to check out the ‘Mystery Restaurant’ first – perhaps he was a bit hungry. He certainly looks like he’s enjoying his food in the photo below.

Next, Aoyama went for a walk around the park to complete the ‘Mystery Challenge’ stamp rally. From experience, the ‘mysteries’ that you have to solve during the rally are pretty easy, but Aoyama nevertheless enjoyed the park’s representation of Heiji Hattori, the Osaka-born detective that appears in the show and ‘challenges’ guests with the stamp rally.

Finally, Aoyama went to check out the real main draw for all Detective Conan fans, the escape room. After all, this is your chance to act out the role of Conan as he is in the show in real life. I’m not sure that Aoyama gets the same satisfaction as we do from this though, given that he created the character, but he did say that he was particularly enthused by the performance of Kaito Kid during the attraction.

I say ‘performance,’ as all of the attractions bar the ‘Mystery Challenge’ stamp rally feature live performances from USJ staff members as various characters from Detective Conan. I can’t help but imagine how nerve-wracking it must have been for those poor staff members who ended up performing on the day of Aoyama’s visit – after all, what if he disagrees with their characterization? I think a warm round of ‘Otsukaresama desu’ is sorely needed for those poor souls.

Furthermore, Aoyama’s happy expression in each picture is very much justified given the Conan franchise’s success as of late. The latest theatrical movie, Fist of Blue Sapphire, has just opened in Japan and has already beaten its own opening weekend record. It’s now very much on track to smash its own overall gross box office profit, something that’s it’s managed to do for six years running now.