I’m talking about the protagonist of Detroit Metal City, whose dream of becoming a Swedish pop-inspired artist is becoming harder to reach as the popularity of his polar opposite death metal alter-persona continues to rise. To make matters worse he begins to find it difficult to keep these two sides of himself separated whenever trouble arises.

If that isn’t one of the strangest plots you’ve heard for an anime, I’d still be willing to bet it’s in the top ten.

The Duality of An Offensive Death Metal Band’s Lead Singer

Starting off as a manga in 2005, Detroit Metal City is a black-comedy series, unlike many others. While I’ve heard and seen some lewdness in my anime, nothing quite compares to the vulgarity of a lead singer telling the crowd that he’s a “terrorist from hell” and urging them to “murder.” And that’s just in the opening from which I didn’t even include the more obscene lyrics he uses.

It would become even more popular three years later when a 12 episode OVA series by the talented Studio 4 °C and a live-action film simultaneously released in 2008.

If you too are a fan of vulgar comedy and the constant gags of a calm man failing to keep his cool and turning into a curse-spewing death metal singer when under pressure, then this series might just be for you!

There is a bit of a plot, but the focus is more on the comedy gags. Nevertheless, I’d hate to ruin some plot or a great scene for those that would be interested in giving the show a try. I’ll be providing the options on how you can experience this unique series below.

Where to Read the Manga and Watch the Anime

Your best bet for reading the manga is to go through VIZ, which shows which retailers that have physical copies. They also show where you can purchase the digital copies so you can read them comfortable at home.

If you’re looking to watch the anime, you can watch the entire 12 episode series on VRV with a subscription to HIDIVE. Physical media such as DVDs and Blu-rays are a bit harder to come by and will likely require going through third-party sellers.

The Japanese live-action film would be seen by a decent amount of viewers in Japan and internationally thanks to it appearing in various film festivals. Unfortunately, it’s not being streamed anywhere online and finding physical media isn’t easy.

Unless you live in Japan and know some great spots to find DVDs from 2008, your best bet is probably to find somewhere that can send you the DVD internationally. Judging from the trailer, it seems to capture the outrageousness of the series pretty well (and Gene Simmons of KISS fame even appears).

Before I give my thoughts on the series, it would probably help to go over the characters so you know who I’m talking about and understand the tone of the series.

Soichi Negishi – A rather normal man who dreams of singing pop music and sweet songs of love. Unbeknownst to many, however, he also performs as “Johannes Krauser II”, the singer and guitarist for the death metal band Detroit Metal City. He hates the music and vulgarness related to his alter-ego, but their increasing popularity keeps him attached.

Terumichi Nishida – While he’s a massive otaku in everyday life, he is also “Camus”, the drummer for DMC. He’s quiet and very perverted, but as Camus, he is an insane drummer who manages to keep up with the crazy antics of the band’s performances.

Masayuki Wada – The man with seemingly the most experience around ladies in the band. He’s also the bassist for DMC, “Alexander Jagi”. Although he looks down upon Negishi for his attitude outside of the band, he’s constantly impressed and jealous of Neigishi’s performance while in-character as Krauser.

Death Records President – The president of the “Death Records” recording label and a massive promoter of DMC. Enamored with the band and recognizing their potential, she frequently comes up with extreme methods to market the band and capitalize on their rising popularity. She’s primarily characterized by her profane, sexual, and extremely abrasive attitude.

Yuri Aikawa – A friend of Negishi from college that he never expressed his feelings for. They run into each other again in a record store and begin to reconnect. Although they are similar tastes in music and appreciate each other’s personalities, she greatly dislikes DMC and “Johannes Krauser II” in particular. A common gag is Negishi making things awkward between the two as his alter-ego comes forth.

I Liked It In High School and I Still Do Today

I remember the first time I heard about the series. A friend recommended it to me because he thought I would appreciate how crazy it is. He only told me the briefest rundown of the series and really coerced me in by letting me know how short the episodes are. Needless to say, I was not prepared whatsoever for what I was introduced to.

Thankfully, my friend was absolutely right in thinking I would enjoy it. I will admit that I do have a limit when it comes to vulgar comedy. After a certain point, it can cross a line and become too obscene for me. And while the anime does skirt that line pretty close for me, the bizarreness is what saves it for me.

Negishi invoking his death metal alter-ego to convince his younger brother to cut the grass and drive tractors so he can prepare himself for beheading people and jacking cars respectively is hilarious. The spit-battle between Krauser and a punk band is outrageously over the top. And any scene with Negishi’s alter-ego coming forth in everyday life is a gag that never gets old.

The clumsiness of the soft-hearted Negishi is another gag that adds a lot. Whatever unexpected scenario he finds himself in is always brought to a far more unexpected extreme. My personal favorite is a scene where he tripped and smashed a guitar into a police officer’s face, much to his dismay and his anarchist fans’ absolute enjoyment. Listening to his realization or internal apologies of whatever horrible act he’s committing is always an amusing contrast.

As much as I enjoy it, however, I honestly wouldn’t recommend the anime to everyone. As I said before, the anime does skirt the line of vulgarity for me. And as someone who has a decent tolerance to the obscene, I can understand if some are left uncomfortable. 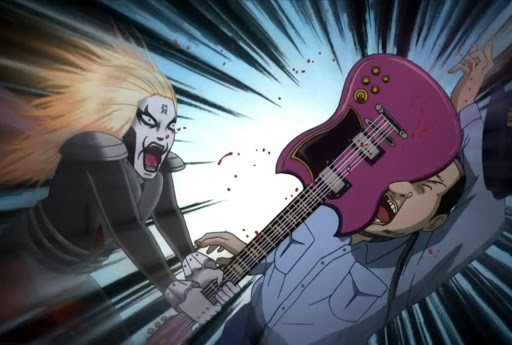 If it’s the death metal theme plus the “hiding their rage/death metal side from others” aspect that you’re looking for, you’ll find similar enjoyment with Aggretsuko. It’s certainly a lot cuter and not as obscene, but there’s a lot of enjoyment that can be had from it and it’s a lot more accessible.

If you’ve already watched Aggretsuko and you want something more extreme though, there really isn’t an apt comparison. It’s only in Detroit Metal City that you’ll find the protagonist’s hairstyle compared to male genitalia and a convenience store worker playing the role of the masochistic “Capitalist Pig” for a death metal band. As far as I can tell nowhere else in history, both in fiction and non-fiction, has there been a song called “Death Penis” either.

The anime came out 12 years ago and yet it is still undoubtedly a very unique experience to watch (or read if you go the manga route). For those that aren’t as bothered by this type of comedy or love it, Detroit Metal City is a breath of fresh air when it comes to the content you’re used to in anime.