‘Devilman’ Whiskey is Back With a Vengeance for 2019 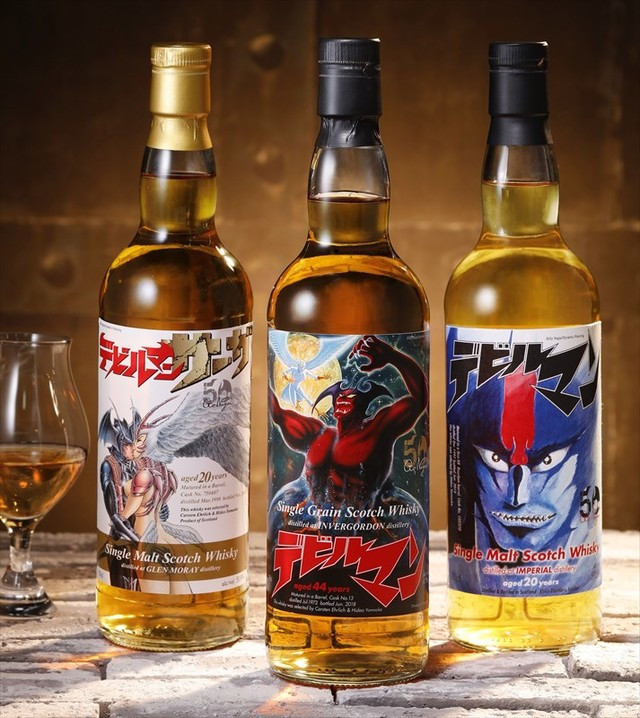 There are no two things I love more than alcohol and anime, so I’m always keeping my eye for any type of product that combines the two. One such product that immediately comes to mind is the Lupin III beer and sake line that appeared last year, and joining the niche this year is a new selection of whiskeys themed after Go Nagai’s seminal Devilman series.

This isn’t the first time that Go Nagai’s Devilman series has inspired whiskeys. Rather, January of last year saw a 44-year single grain bearing the name of Nagai’s masterpiece sell out in just a day. We somehow didn’t cover that at the time, but nevertheless, both us here at OTAQUEST and retailer Otono no Ippin have come prepared to sait the enormous demand.

Three different Devilman-themed whiskeys are on offer this year, including the same type that went on sale last year. These are the Invergordon 1973, Imperial 1997 and Glen Moray 1998. Otona no Ippin has also increased the stock to 477 bottles across all three varieties this year, up from the 252 stock of the lone Invergordon last year.

As you might be able to guess from how long the different whiskeys have been distilling for, the actual liquor itself has little to do with Devilman other than branding. But slapping an anime character on a product is a surefire way to get me to buy anything – so I’d be lying if I said I wasn’t tempted.

The Devilman whiskeys do, however, come at the recommendation of whiskey expert Hideo Yamaoka. The flavor profile of the different vintages, as curated by Yamaoka, is enough to get the taste buds tingling.

The Invergordon 1973 is a 44 year “clear and light” single grain scotch whiskey with a sweet honey and vanilla aroma and carries a label design featuring a battling Devilman and Sirene.

The Imperial 1997 is a more easy drinking 20-year single malt, which promises a “yellow flower and dry fruit” aroma with a spicy finish. The bottle also features a solo portrait of the titular Devilman himself.

The Glen Moray 1998 is another 20-year single malt, this time sporting a “chocolate, biscuit and marmalade” aroma with a woody finish – truly evoking a very Scottish feeling, as per its brewing location. Its label also features an illustration of Amon and Sirene from Devilman Saga, the often overlooked ‘finale’ to the original Devilman trilogy by Go Nagai.

Devilman has always been a series that’s keen to have a good time, especially when you consider that the series hosted a high-class party in Ginza along with Cutie Honey last December. Perhaps this is why, despite the main festivities around the Go Nagai ‘50th anniversary’ coming to an end last year, the series couldn’t help but give whiskey another go.

Check out Otona no Ippin’s website for more information regarding the various Devilman whiskeys. Orders open on May 21.