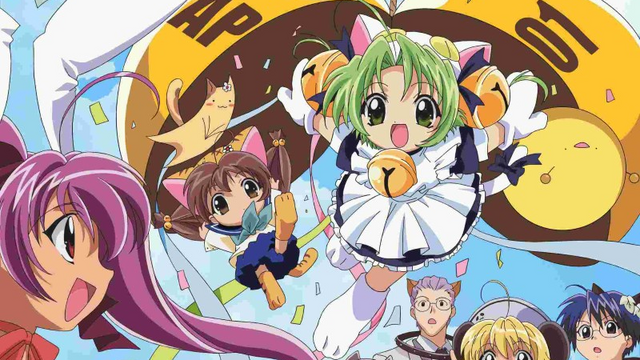 From 1998 to 2006, several different manga and anime versions of the Di Gi Charat story have been created (with several different titles). Audio dramas have also been recorded. These different versions have sometimes told slightly different stories, and the same characters haven’t always appeared in all formats.

Still, one thing has remained constant throughout all versions: a sugary-sweet overload of cute cat girl (and sometimes bunny girl and panda girl) characters. Behind the scenes, all of this cuteness is actually subtle advertising for the anime, manga and otaku store Gamers.

It all Started in Akihabara

Di Gi Charat (aka Digiko or Dejiko) makes her first manga appearance in 1998. She was in a four-panel comic strip (or ‘yonkoma’) in the magazine From Gamers, a promotional magazine for the Gamers store chain, based out of Akihabara. In real life, Dejiko is the mascot for the store.

A short Di Gi Charat anime series was created in 1999. This anime series (and the audio drama which also came out that year) was the first series to really establish Dejiko’s overall personality. In the anime, Dejiko works for Gamers. She’s cute, but she has a short temper. She can fire laser beams from her eyes when she gets mad or upset. Lots of things make her mad.

Dejiko is apparently an alien princess from another world who arrives on Earth in a cat-themed UFO. Princess Dejiko’s alien origins are expanded upon in future series. While on Earth, she always dresses as a maid. In the Akihabara area of Tokyo, is it not uncommon to find girls dressed as lolita maids while advertising for stores, or serving meals at maid cafes. Dejiko’s maid outfit might not be as unusual as it sounds. She also wears a cat-ears hat, a cat bell collar and cat bells in her hair.

In this series, Dejiko has a rival, the bunny girl Rabi-en-Rose. Rabi-en-Rose appears to be bigger and taller than Dejiko. Unlike Dejiko, Rabi-en-Rose is a human girl. According to the Di Gi Charat Wiki, her real name is Hikaru Usada.

Because Rabi-en-Rose is a human girl, she doesn’t appear in the Di Gi Charat prequel episodes, which take place in Dejiko’s home world.

Puchiko (Petit Charat) and Gema are Dejiko’s main companions. Puchiko is Dejiko’s younger half sister, while Gema is Dejiko’s guardian. Gema (a round, floating creature/ thing of some sort) is easily abused or left behind by Dejiko and the others.

Minor characters include Takeshi and Yoshimi, fans of Dejiko; Minitaku, a boy who falls in love with Rabi-en-Rose; and Mister Manager, who runs Gamers.

There’s not much of a plot to explain, the series is pretty random. Dejiko works at the store, she gets into fights with Rabi-en-Rose and others. And then, there are weird customers and weird Dejiko fans in the store. Gamers seems to have no problem with making fun of itself, or its customers.

Winter Garden (2006) is a huge outlier in the series, and worth a special mention. At first glance, it doesn’t even look like part of the main Di Gi Charat franchise. Dejiko and Puchiko are older (20 and 15 years old, respectively). They appear to be ordinary Japanese girls. There are no eye beams and no Gema. Rabi-en-Rose cameos.

Winter Garden’s main story is a romantic plot involving a shared umbrella. The art is more serious and less chibi/ cartoonish than usual.

The Di Gi Charat series is not available on Crunchyroll.

The spin-off series Panyo Panyo Di Gi Charat came out in 2002. This is a prequel to the main Di Gi Charat story.

It takes place on planet Di Gi Charat. Yes, the Di Gi Charat planet has the same name as the character. The whole planet wears a cat ears hat, similar to the one that Dejiko wears.

It’s still a comedy, but there’s more of a plot to it. Each episode is only about five minutes. The show is aimed at young kids, but it is cute. It follows Princess Dejiko. Dejiko and Puchiko want to help the people of Di Gi Charat. But, as a princess/ student, Dejiko isn’t really supposed to leave the castle. In the first episode, she’s caught when she attempts to sneak out.

Eventually, the two catgirls are finally allowed to leave, accompanied by Gema. They make new friends, Meek and Rinna, and find ways to make people happy. One of those ways is to help Rinna with her bakery. It seems that Rinna falls asleep easily. Before Dejiko shows up, Rinna’s bakery is only open when the narcoleptic owner is awake.

The friendly heroes of the show are opposed by Piyoko (Pyocola Analogue III) and Deji Devil. Piyoko is Deji Devil’s underling, and the leader of the Black Gema Gema Gang. Piyoko and Deji Devil want to make people unhappy. Of course, as designated kids show bad guys, they are destined to fail. That’s about it, really.

All the characters are drawn in a very chibi, cartoonish style, including the bad guys. Deji Devil tries to look mean, but he just looks cute.

Piyoko is every bit as cute as the other characters on the show.

In 2003, Piyoko got her own Original Video Animation (OVA), Di Gi Charat Theater – Leave It To Piyoko!

Leave It To Piyoko! features Piyoko and the panda-themed Black Gema Gema Gang. They are still the bad guys (they’re trying to kidnap Dejiko, and hold her for ransom), but now they get to be villain protagonists.

It should be noted that Piyoko does have a (sort of) valid reason for her evil actions in the OVA. She is the princess of her own planet, and her planet is apparently quite poor. So, the ransom money would help fix that situation.

Dejiko is apparently older than she was in Panyo Panyo. She is once more wearing her iconic blue maid’s outfit, instead of the pink outfit she wore on Planet Di Gi Charat.

Di Gi Charat Nyo! is a reboot of the original Di Gi Charat series. It was created in 2003-2004. The show is neither a sequel nor a prequel, but an alternate storyline with some familiar elements.

The main characters from the original series are all here, and Piyoko returns. Dejiko is still a princess from another planet. She still has her eye beams.

There are also new elements. Dejiko is sent to Earth in order to get ‘princess training.’ Dejiko and Puchiko get separated on Earth, and can communicate using ‘Mystery Phones.’ Dejiko eventually ends up at ‘princess school.’

Generally speaking, there’s more plot in Nyo! than the original series, and there are some good parodies. The art style also seems to have evolved somewhat.

Where does the ‘Nyo!’ in the title come from? Well, many Di Gi Charat characters tend to have some sort of verbal tic or another. Since Dejiko is a catgirl, she says a lot of ‘nyo’ sounds. (Nyan, nyo, nyu, etc. are all Japanese equivalents to ‘meow.’)

One element missing from the new version of Di Gi Charat is Gamers. The store which made Dejiko possible in the first place is not a part of this anime. In real life, Gamers still uses Dejiko as a mascot character, but the store no longer plays a role in her anime world.

Various sources credit manga artist Koge-Donbo with creating the Di Gi Charat manga. Koge-Donbo also created the character designs for A Little Snow Fairy Sugar. The cute little fairies of the manga and anime bear a family resemblance to Dejiko and her friends.

There have also been comic anthologies.

Where to Watch Di Gi Charat?

All of the various Di Gi Charat anime shows can be hard to find in the United States. This is because of licensing troubles.