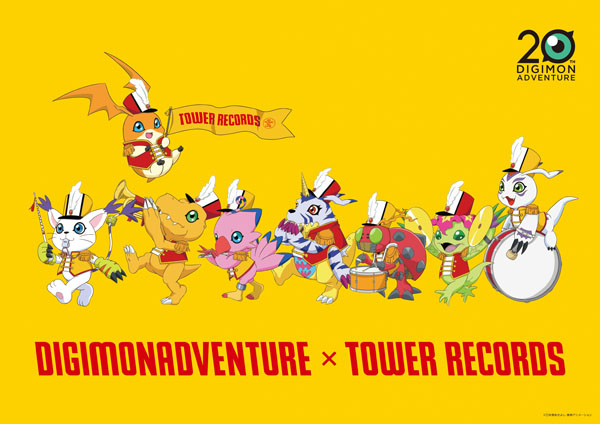 We recently spoke about the new trailer for the upcoming Digimon Adventure movie, one promising to once again continue the series the recent 6-part movie series revived. Well, as it turns out, this year is also approaching the 20th-anniversary of the release of the original Digimon Adventure series, believe it or not. The series is still by far the most popular piece of Digimon media both inside and outside of Japan, and with such a momentous anniversary on the horizon it makes sense that they would go all out in order to celebrate it, as seen by the special Digimon Adventure-themed Cafe set to open in a few days time for a limited time only at Tower Records Omotesando.

Although this means that it won’t be able to take a place within the larger cafe found within the iconic headline Japanese store for Tower Records in Shibuya, the store itself is not too much of a walk from this store and certainly doesn’t look set to disappoint fans of the series in spite of its location. Multiple collaboration food items and collaborative merchandise with the yellow iconography of Tower Records will be available as part of this limited-time Digimon Adventure Cafe. Available as part of the Cafe is Agumon’s Meat stew for 1,450 yen, a meat stew (obviously) with rice in the shape of Agumon’s head in the center of the plate. Gabumon’s burger will also be available for purchase and a latte with a special design on the forth of the drink will also be made available. This isn’t all, as more food, alongside a special range of desserts, will also be made available during the crossover event. The event is split into two distinct timeframes from July 13-21 and July 22-31, and some food and drink dishes will rotate (as well as the entry gifts on offer as well, to encourage multiple visits by the most dedicated fans).

When it comes to merchandise, visiting the cafe will make you eligible for one of two postcards with the Digimon themselves running along a vinyl record, while an even-harder-to-get postcard will be distributed randomly to those who order 3 items from the collaborative menu. The merchandise available is a mix of your standard collaborative goods, such as clear files and keychains, to one item that really embraces the spirit of Tower Records, a 4,500 yen Acrylic Record with the Digimon Adventure logo.

The cafe in total runs from July 13 until July 31 at the Tower Records store in Omotesando, Tokyo, and just goes to show how much love there is for the original Digimon series and its characters (and why they’re so willing to continue the story with Tri and its upcoming new movie). You can find more details on this collaboration over on the official website.