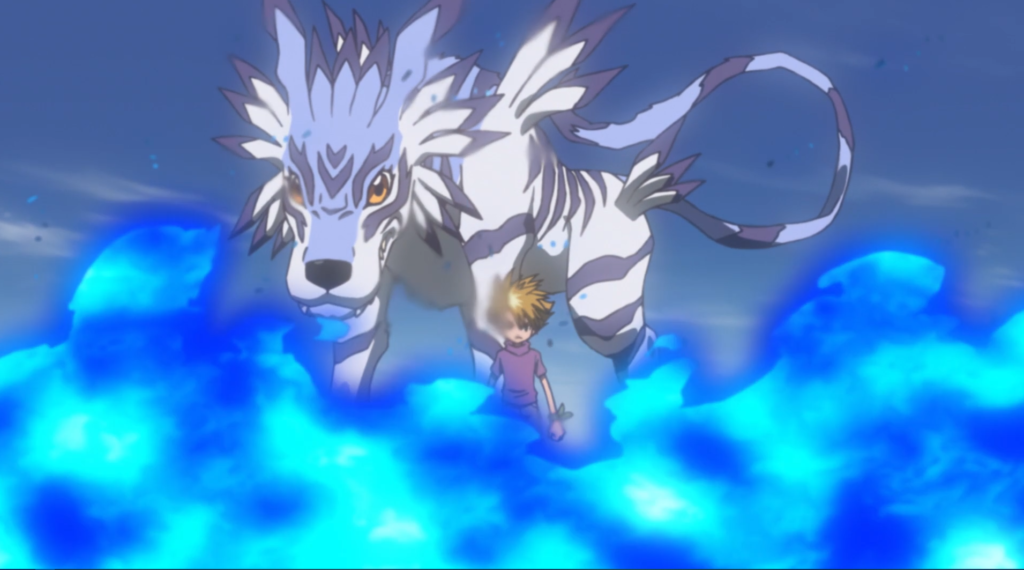 After an action-packed two-episode storyline filled with ogres turned anti-heroes and giant mechanical tyrannosaurus rexes duking it out in the Digi ring, Digimon Adventure Episode 11 opts to slow the pace down for the audience to catch their breath. You know, just in case the arduous act of watching children’s anime was tiring out your brains. After all most of this show’s viewers, and definitely all of its English speaking audience, are probably adults basking in the nostalgia and as adults, most of us probably aren’t eating the sugar blasted cereal that used to be necessary to properly fuel your brains for Saturday morning cartoon adventure. Sure we do get some monster fighting, some lore, and a predictable digivolution. However, I’d like to touch on one thing before we get started. 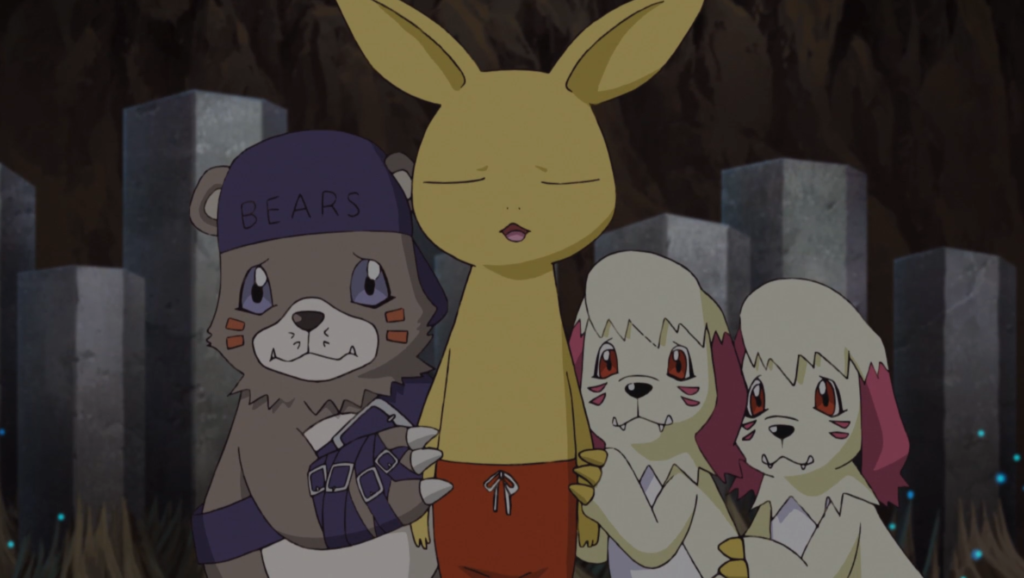 Why the hell is Neamon here? Who the heck in the Digimon Adventure Episode 11 writer’s room went and said ‘Do you know who all the fans want to see? No, not Wizadmon. Definitely not Renamon! No, they want to see Neamon!’ If you’re unaware of who this meatless Pikachu in sweatpants is, consider yourself lucky. See, Neamon was an annoying sidekick character from Digimon’s fourth season Digimon Frontier. Regarded by most as the worst season of the franchise, at least regarding its original four-season run, Neamon might be exactly the last character prominent in a non-canonical season to turn up here. All this weird man would do was whine and complain, making him arguably the worst part of the worst show. 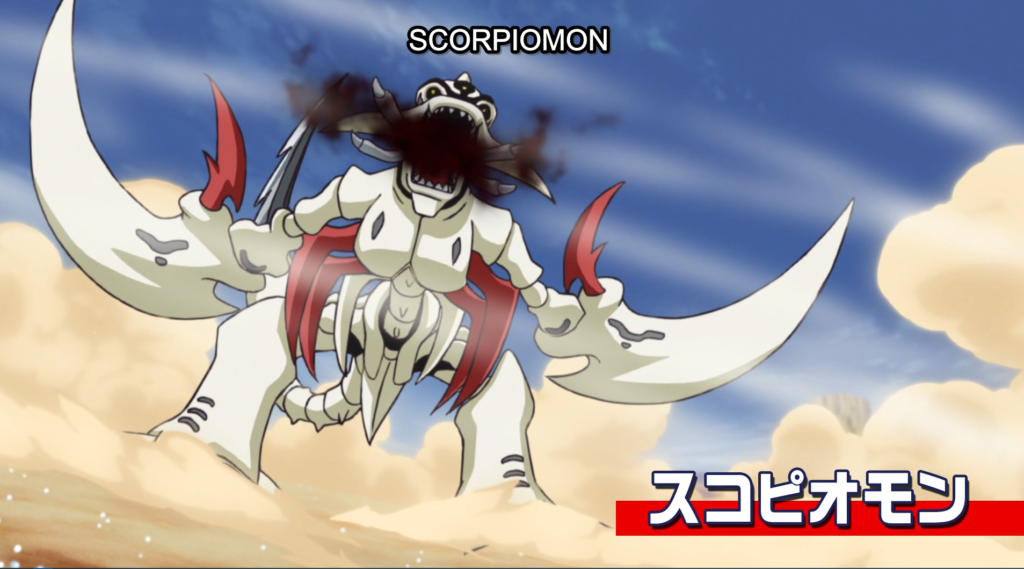 Digimon Adventure Episode 11 makes up for reminded me of Digimon at its darkest moments with this cool monster of the week bad guy named Scorpiomon. The dude is whatever would call the opposite of cuddly, and the show actually depicts him massacring local smaller native insectoid Digimon just because he can! Pretty nasty for a kids show honestly and it serves as a good reminder that the series can and very occasionally does delve into some dark territory, even though it’s not a huge focus of the episode.  What do you do though when a gigantic skeletal scorpion is running amok, killing the wildlife, and making multiple attempts on your life and on those around you? Why, you predictably digivolve of course! 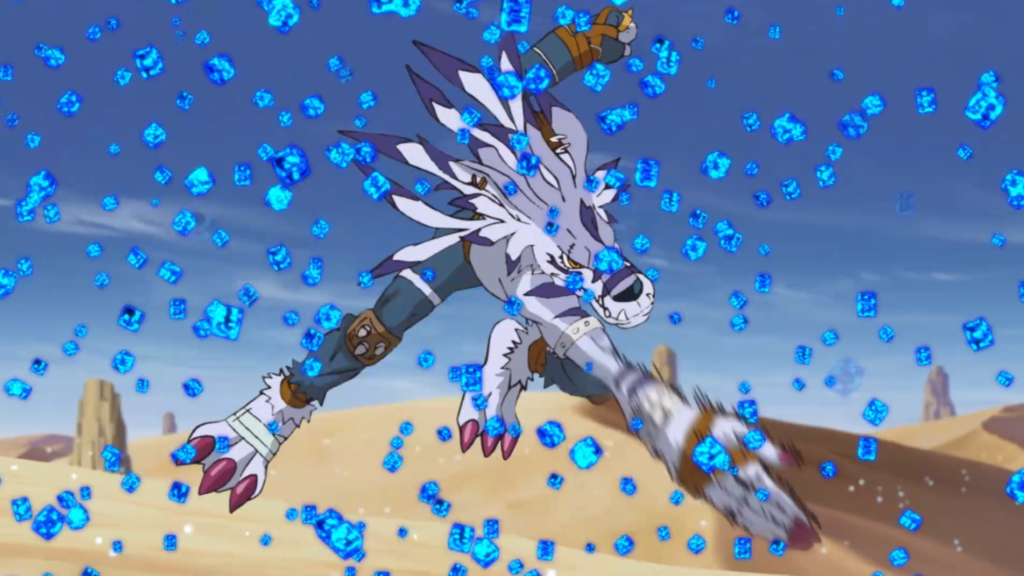 Just as episode 10 introduced WarGreymon, Digimon Adventure Episode 11 brings the ultimate level WereGarurumon into the fold. Unlike the last episode, we didn’t even get a noticeable two-minute boost in animation quality as this Halloween themed anthropomorphic wolf tore up Scorpiomon! The battle here was alright, but we’ve seen a lot better consistently throughout the Digimon adventure reboot. All in all the episode was just okay, and that’s not even factoring in an unwanted sighting of Neamon! One assumed the next bunch of episodes will feature each of the main Digimon achieving their Ultimate Digivolutions but let’s hope the show ups the story-telling and the fight choreography along the way. I’m still with the show for the long-haul and excited for the new developments made along the way.

You can watch Digimon Adventure Episode 11 on Crunchyroll.