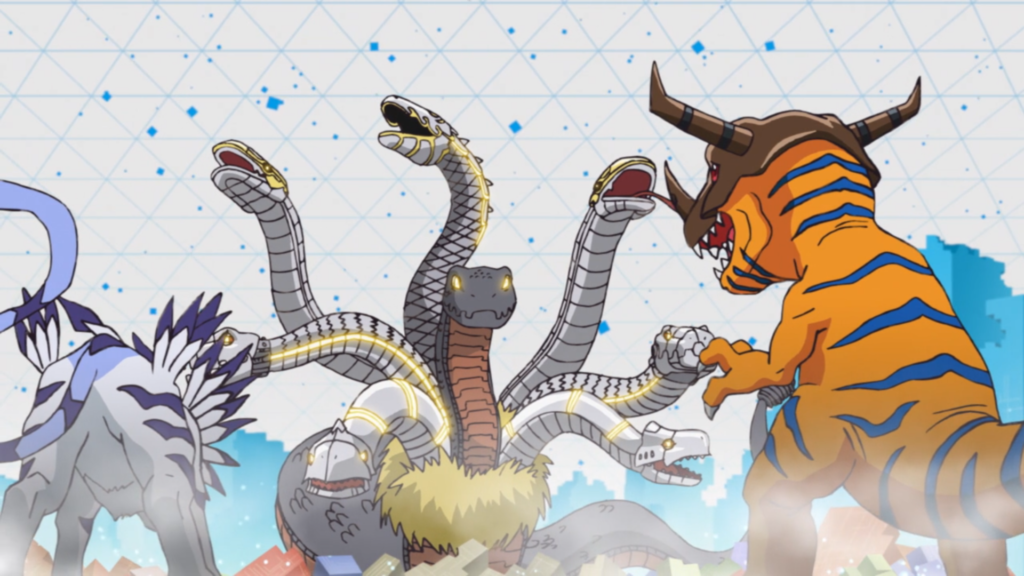 Oh no! Shibuya’s under attack by a giant eight-headed monster named ‘Orochimon’, a name which might make Okami and Naruto fans snicker.  At least, some kind of full-scale digital replica of Shibuya that seems to have some effect on the real city despite being in some other place. Digimon Adventure Episode 16, the best single episode in the show thus far, left us with a tease of a giant monster on the horizon and Digimon Adventure Episode 17 delivers. It’s a particularly action-packed one from start to finish, although there are a few character-based detours along the way that add to the credibility of this show as a whole. If you’re into this franchise because you like watching a bunch of weird monsters with guns for appendages throwing down, you were the winner this week. 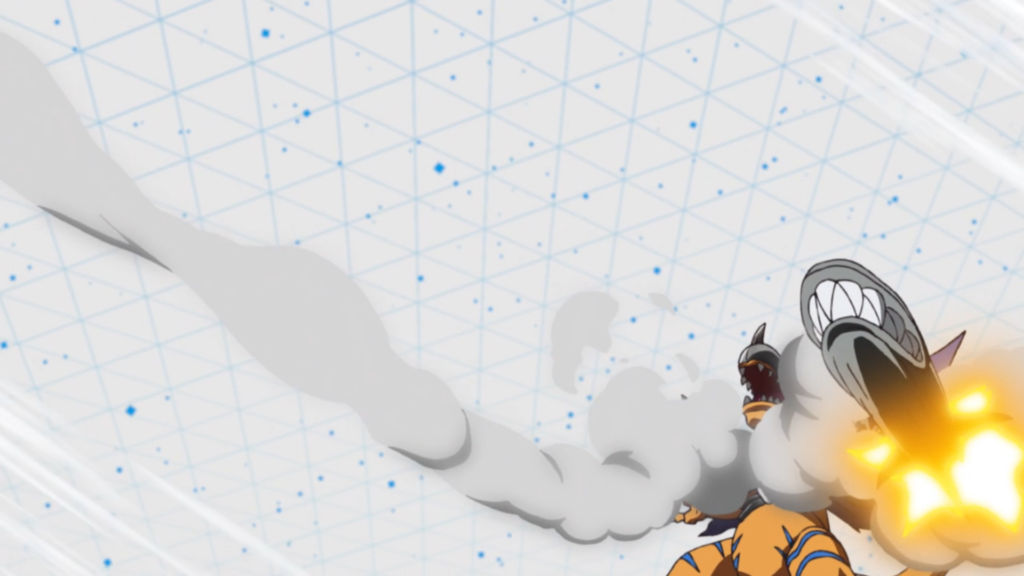 You had a lot of big ultimate level Digimon teaming up to fight a particularly gargantuan ultimate level Digimon with 8 heads in Digimon Adventure  Episode 17. While not consistently sad to say, a lot of the individual shots are depicted with some pretty slick animation making them a kinetic watch. Generally, your Digital Monster cartoon isn’t going to have your level of fight choreography of a big shonen show but these Kaijuu battles by another name are more than just serviceable. There’s certainly nothing else airing right now that’s going to give you a Pacific Rim type experience and anything coming close isn’t doing so with even half the heart Digimon has always had. 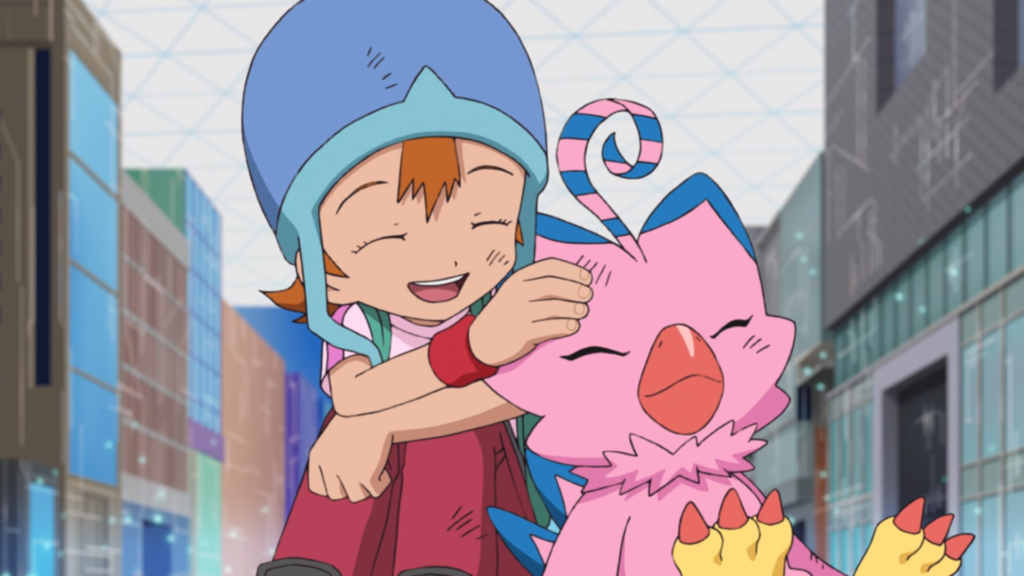 While this all-out attack against Orochimon pretty much consumes the entirety of Digimon Adventure Episode 17, there’s some soul to be found in between the scrappings of a giant android dinosaur and a big ‘ole snake monster. We get a particularly good scene with Joe, Mimi, Sora, and Koichi, as well as their partner Digimon, reflecting on their journey so far. They note the good, the bad, what’s scared them and what’s helped them to grow as people. It’s a nice bit of self-awareness from these young characters that help continue to flesh out their humanity. Another nice aspect of this scene was the fact that it did center around the secondary cast of the show as opposed to Taichi and Yamato aka the Naruto and Sasuke of Digimon Adventure. 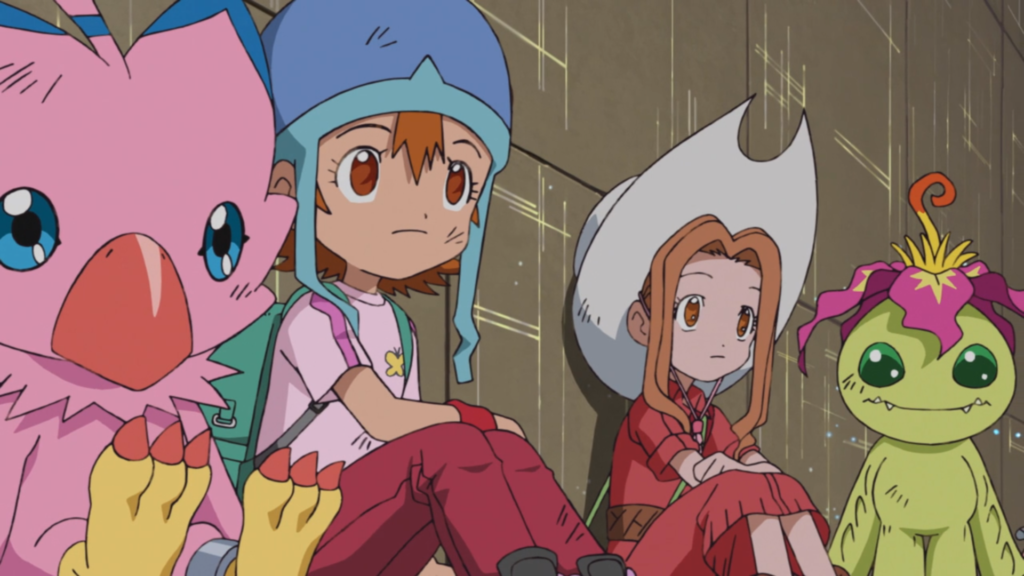 Of course, while Joe, Mimi, and the rest were chatting it up ultimately it was Taichi and Yamato who finished off the giant beast.  The battle was the main attraction of the episode and the conversation between the kids was a welcomed side dish but there’s one more thing to touch on. We’ve seen them briefly, but this episode begins to spin the cogs that’ll eventually lead to Hikari and Takeru, Taichi and Yamato’s respective younger siblings, into joining the fold. We’re nearly 20 episodes in and not a Patomon nor a Gatomon has yet to be seen and honestly that’s pretty impressive that this remake’s willing to commit like this. Digimon Adventure Episode 17 leaves us in another interesting place as electricity in the real world begins to severely malfunction. 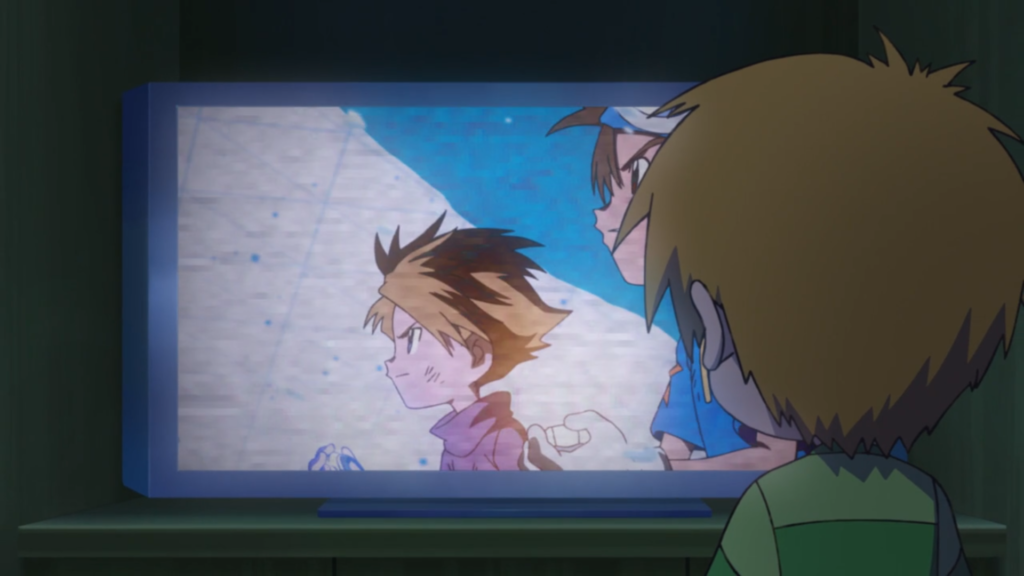 You can watch Digimon Adventure Episode 17 on Crunchyroll now.