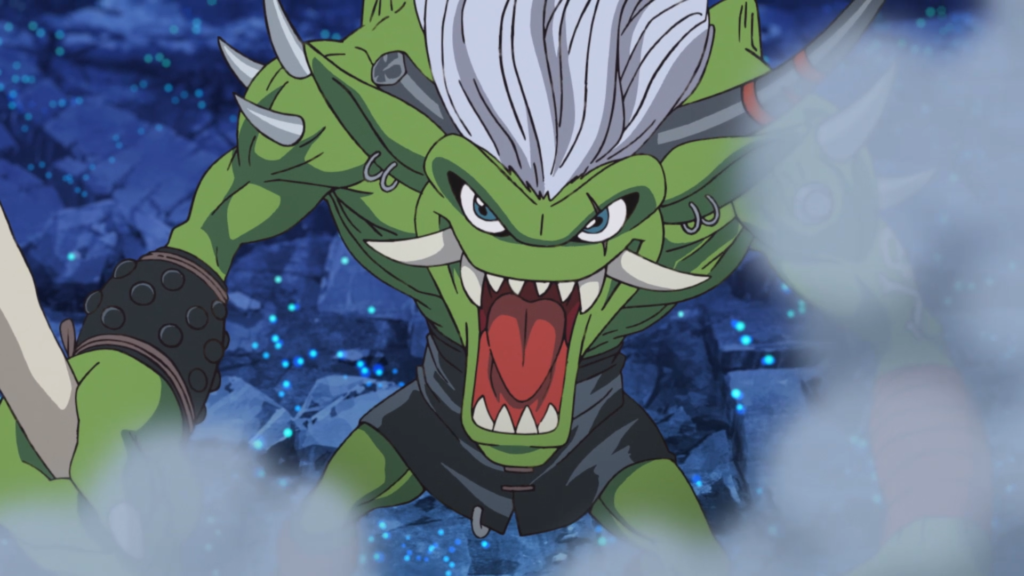 Everlasting friendship, a once in a lifetime journey, and a whole swath of creatures that actually responded when you talked to them, these are the key elements that made the early seasons of Digimon some of the best kids entertainment we’ve ever had. Sometimes though, Digimon would have to put the character development and read world emotional stakes on hold and just let some big old boys bash each other in the noggin until one fell. Unlike their first string pocket monster competitors, Digimon had no problems with letting their creations grow huge, get creepy, and at times play with guns!  The reboot of Digimon Adventure Episode 9 is one of these episodes where the brunt of it has all hell breaking loose as giant monsters try to take each other out. 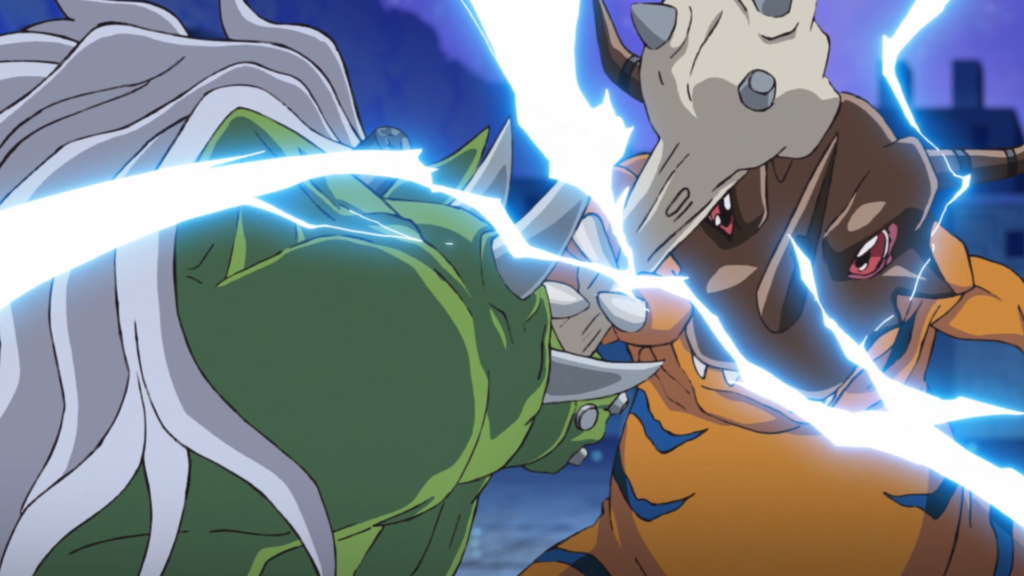 After last week’s more lowkey spy-infiltration mission-based episode, I welcome the clash between Greymon and Ogremon Digimon Adventure Episode 9 whips up. Other series diehards will easily recognize Ogremon as one of the first big sub-boss baddies of the original series, becoming something like Digimon iconography. We find here taking orders from a silhouette Devilmon who wants him to crush those pesky digi-destined and their meddlesome digimon once and for all. Why all-powerful bad guys keep relying on their clearly less powerful subordinates to take out the trash is beyond me, yet due to the trope, Ogremon is forced to get off his ass and fight a bunch of children. He brings a small army of fireball spouting dragon looking digital monsters to really salt the earth. Tai and Greymon step up to the plate and once Izzy and Kabuterimon join up with the rest of the group, the creature clash really begins to ramp up. The Kaiju stuff looks pretty good throughout; Not the series’ best animation yet, but far from its worst. 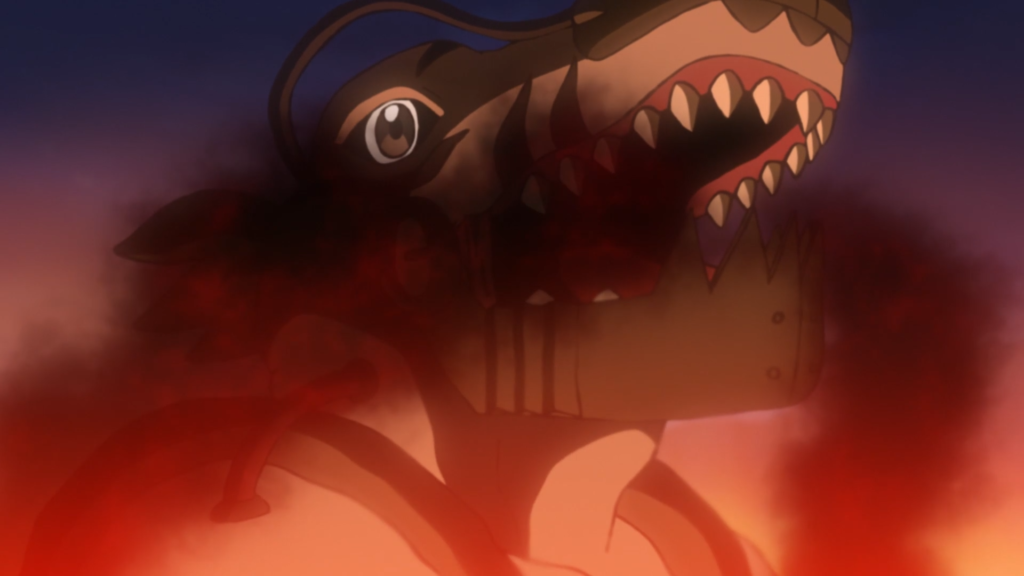 Reinforcements are sent in when it’s clear Ogremon has no chance of winning against a united front of elementary school-aged children and their juice up mons. Interestingly, it seems to make no difference to the genuinely frightening MetalTyranomon whether friend or foe gets in his way and he’s content to destroy any and everything that crosses its path. A real sense of futility sets in as both the kids and Ogremon realize there’s nothing anyone can to stop this cybernetic beast. That’s when Digimon Adventure Episode 9 pulls off its most interesting bit in (spoiler alert) having Ogremon actually help our protagonists escape. I’d chalk that up to cliche but he mutters ‘I’ve been replaced!’ before doing so, kind of indicated he’s kind of an actual character with autonomy. 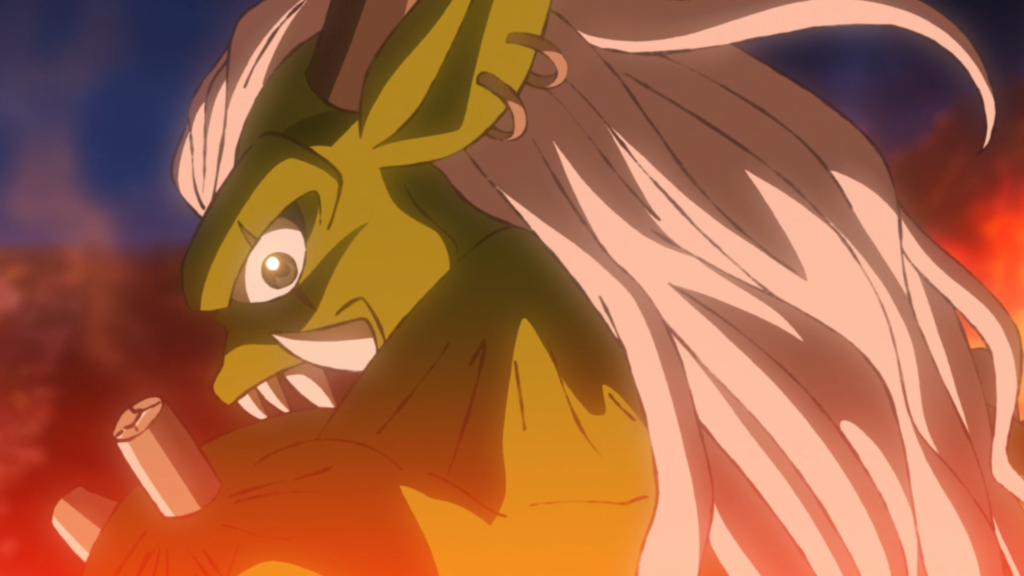 Ah, the classic antagonist looking back over his shoulder telling the hero to escape before meeting a bad end scene. Never gets old! Though Ogremon has been a Digimon staple in the past, if this Digimon Adventure reboot does turn him into a complex character, I’ll be pretty impressed. Just the idea of that I find genuinely compelling and since the show hasn’t been half bad so far, I believe they could even pull it off.

You can watch Digimon Adventure Episode 9 on Crunchyroll.