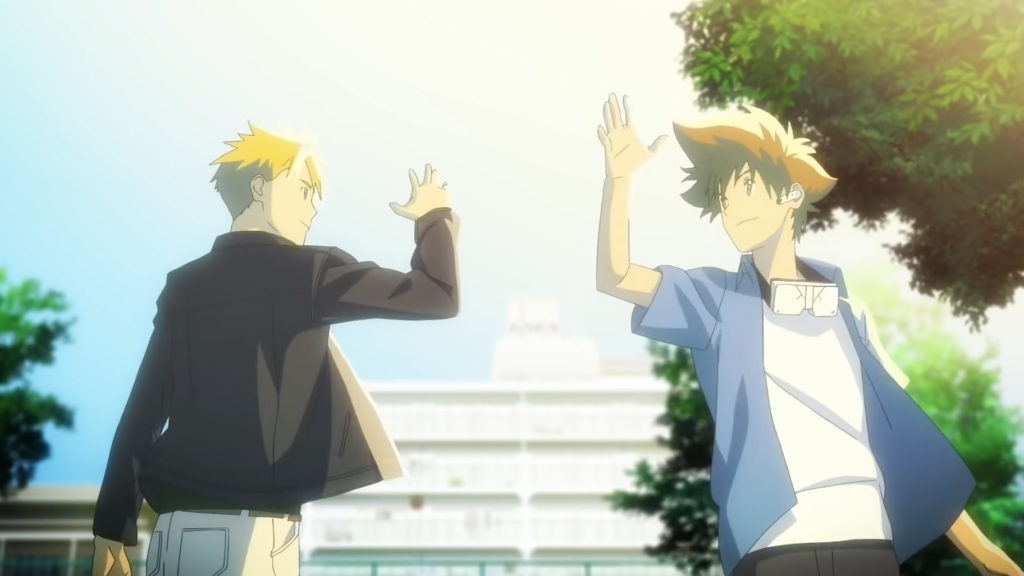 When a film that’s supposed to be the culmination and final entry in a two-decade-old beloved franchise, announcing a full-on reboot of said franchise that will start just one month after the film comes out sort of cheapens the appeal. Granted the new Digimon Adventure TV anime that’s set to air in early April retells the story in, presumably, a new canon but with more immediately on the way Digimon Adventure: Last Evolution Kizuna doesn’t really feel like you’re saying goodbye. The good news is, that doesn’t stop the brand new Digimon Adventure movie from being a beautiful final set-piece even if it isn’t really the end. Having written entire love-letters to Digimon and what’s made this particular kids monster franchise, I admittedly went into this film with a strong bias. But honestly? Even I came out of the film pleasantly surprised by how inspired some of the film was and glad Last Evolution Kizuna nails it as an authentic Digimon Adventure experience.

Don’t worry, we’ll try to keep the stories to a minimum.

Digimon Adventure: Last Evolution Kizuna takes place a few years down the road after Digimon Adventure Tri and… largely ignores the events of that multiyear project! Not in an ‘it didn’t happen’ kind of way but Last Evolution Kizuna certainly doesn’t do it any naval-gazing. In fact Mei, the original digi-destined from the comeback season of Digimon Adventure Tri only makes a small cameo in this film! I suppose the big reason for that was, just as Tri did, this new movie is targeting fans of the first two seasons of Digimon. Not everyone kept with Tri, with only a handful of episodes being every 6 months over the span of three years. Not wanting to alienate potential viewers, they opt to keep much of past lore specifics to some subtle, and some not so subtle nods instead of harping on them. Thankfully though it does continue down Tri’s spiritual path of aging up the characters, with this time the squad on the verge of finishing college and beginning adulthood. In fact, that’s the major theme of the movie!

The film billed itself as ‘Tai and Agumon’s last adventure’ and hung on the fact that everyone’s growing up! Putting next season’s Digimon Adventure remake aside for the sake of this review, Digimon Adventure: Last Evolution Kizuna really does harp in on the fact that Tai, Matt, and the rest aren’t kids anymore. It goes as far as to having Agumon finding the now college-aged Tai’s hidden porn stash underneath his bed. Ignoring our suspension of disbelief for a second about anyone still having physical copies of adult material, that’s a pretty wild concept! 20 years later and Pikachu never found a copy of playboy stashed up next to Ash’s Pokeballs.

Of course, there are more serious looks at the digi-destined’s struggles with adulthood; Tai having a wistful moment to himself as he stares at his old trademark goggles or a look of defeat crossing Matt’s face every-time he walks by a street performer or a musical instrument shock. Shockingly, and I mean that sarcastically, these feelings are exacerbated when the film’s original character Menoa tells them no one can stay partnered with their Digimon forever. Not just metaphorically mind you, a digi-destined’s partnership with their Digimon allowing them to cross into the real world and the clock on Matt and Tai’s is about to run out. Knowing my 20s are only hanging on by a thread as I was sitting in the theater watching a Digimon movie in 2020, I admit it hit a little close to home. 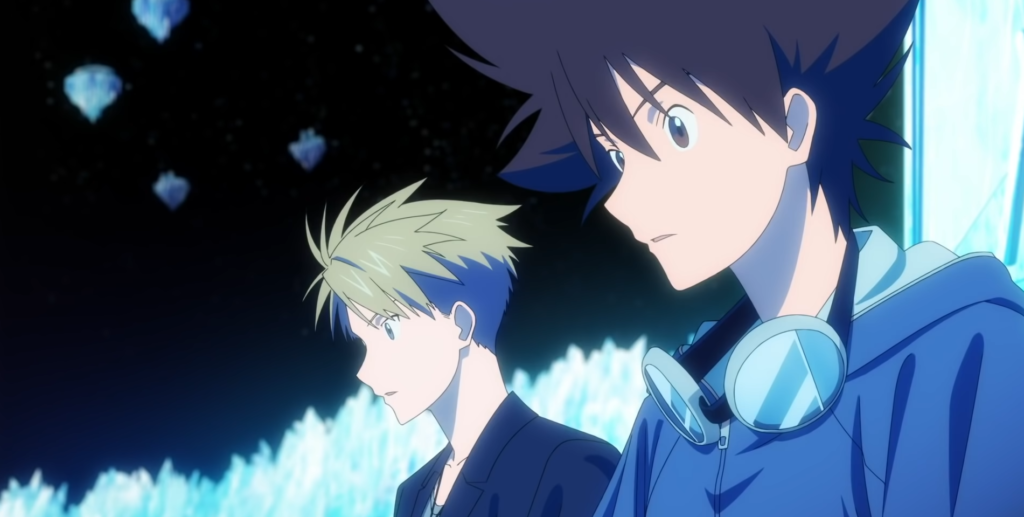 Tai and Matt. Matt and Tai. You’ve probably noticed by now this article hasn’t mentioned any of the other digi-destined. Digimon Adventure: Last Evolution Kizuna might be better described as the Tai and Matt Get Sad The Movie featuring some other yahoos on occasion. Being the Goku and Vegeta of Digimon Adventure, it’s not surprising the hot-headed goggles clad hero and the cool harmonica playing pretty boy would get the leads roles. The Digimon fan in me was a little upset not to see more of some characters, with Sora probably getting less than 2 minutes of on-screen time at all. On the same hand, the Digimon fan was happy to see the cast of Digimon Adventure 02 make their grand return after their practical absence in Tri even if these 02 cast had more of an active role than Sora, Joe, and Mimi. Now on the other hand? Focusing the emotional arc of the movie solely on the two made for a better film.

Ultimately Digimon Adventure: Last Evolution Kizuna is a better Digimon movie than it is a stand-alone animated film. That doesn’t mean there aren’t some real visual flourishes and moments of directions throughout that come off as actually impressive. The opening fight sequence sports about the best fight animation and physical choreography the series has ever had. Angemon and Angewoman get thrashed around Nakano fighting a giant parrot before Tai and Greymon save the day. Beyond it being depicted with some of that genuine kinetic energy similar to what the studio Toei Animation accomplished in their great Dragon Ball Super: Broly, the whole scene features beautiful lush lighting overlaying it that when mixed with the destruction and the triumph makes for something visually unique. In addition, some of those scenes with Matt and Tai feeling stubborn about their age and not wanting to separate from their beloved partners Gabumon and Agumon really do hit hard. Plus, the big bad this time around is genuinely striking and its attacks feel weighty. 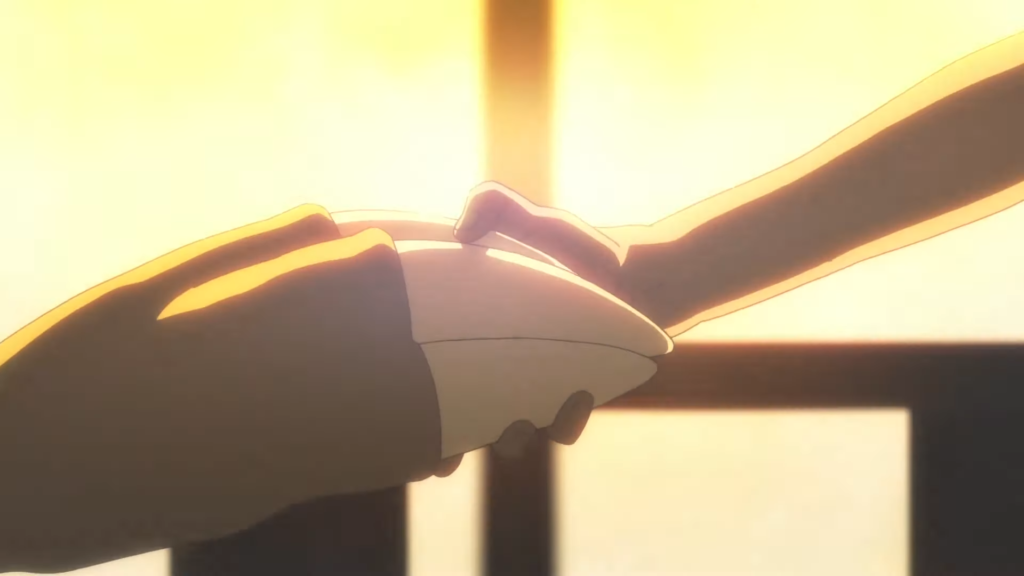 Last Evolution Kizuna was directed by Tomohisa Taguchi who has some experience working with long-standing franchises having directed two of the Persona 3 films as well as the Persona 4 The Golden anime. In wanting to keep in tone with the best of Digimon Adventure, he’s seemingly taken influence specifically from the Mamoru Hosoda Digimon short films which were compiled together in English under the name Digimon: The Movie. Beyond that opening scene we discussed in the previous paragraph being a giant homage to his first Digimon Adventure short film, even the animation style occasionally Hosoda’s Digimon work like the occasional colored (instead of black) outlines for visual emphasis as well as the softer color palette. Taguchi’s direction style doesn’t ape Hosoda, but he successfully recreates the ‘Digimon film’ atmosphere over the tv series vibe which works considering Digimon Adventure: Last Evolution Kizuna is a Digimon film!

For those of you who are going to see this film just to revel in digital monster nostalgia, there’s a lot here for if you keep your eyes open. The battle with Parrotmon isn’t the only homage to the seminal Mamoru Hosoda Digimon canon, as that whistle makes a brief but powerful reappearance. Digimon Adventure 02 fans, of which I’m one, will delight in getting to see Davis be a total idiot again in New York. You might even get to see Willis, Lopmon, and Terriermon if you really pay attention. A lot of the Digimon fan-service is actually pretty subtle, with even Tai’s goggles acting as more as a physical manifestation of the ‘hey i’m an adult now’ metaphor. No clumsy and cheesy ‘hey don’t forget your goggles tai!’ scenes here. I loved every call back they didn’t down my throat, mostly because it was all tastefully done with the appropriate amount of sentiment without veering into overindulgence. Admittedly, I still screaming ‘WHERE’S SORA’ on the inside though. 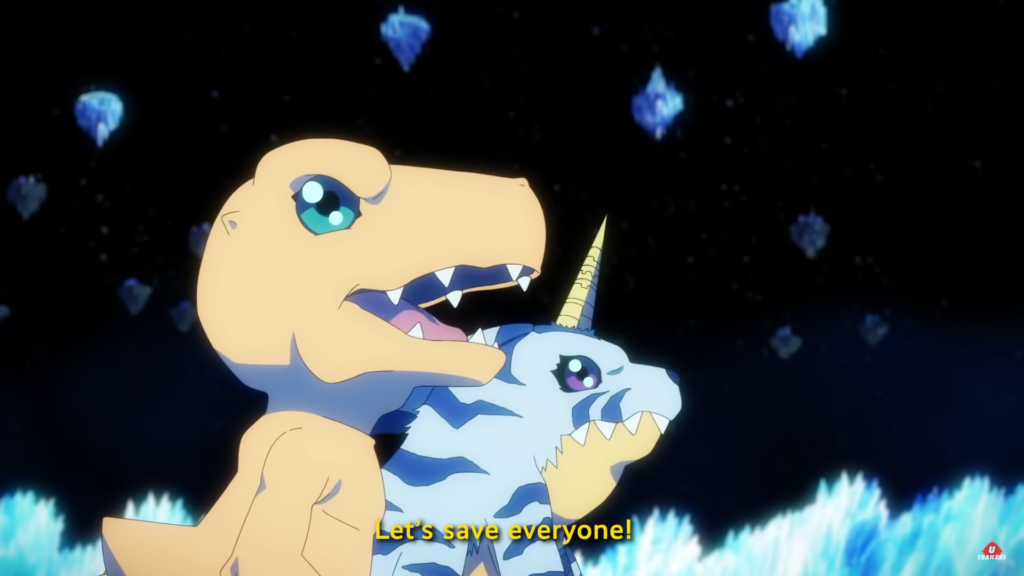 All in all I enjoyed Digimon Adventure: Last Evolution Kizuna for what it was; A rare chance to see characters I’ve loved since I was a kid growing up, but hold onto their fighting spirit and their cherished bonds of friendship. Some nice animation and emotional beats along the way didn’t heat either. Again with more Digimon Adventure right around the corner, you don’t really feel like this is it and if we’re being technical there are still some gaps to fill in between this and the Digimon Adventure 02 epilogue which canonically blah blah blah blah. Before I set off on ubernerd territory, I’ll wrap this up with a just a few more words. I liked this film as much as I liked Digimon Adventure Tri and even if you didn’t watch all of Tri, if you’ve still got some fondness in your heart for Tai and Agumon,  go ahead and catch this film when you can. You might be grown up now too, but it’s nice to be reminded about what’s truly important now and then.