Dirty Pair Are The Definitive Duo For Old School Fans

The buddy cop genre of film was a staple in 80s action cinema; Over the top gunfights, endearing personalities, and enough one-liners to fill up a book.

With such a time tested formula, it made for an easy transition to the anime side of story-telling too. While there have been a number of old school duos worth noting, like The Gunsmith Cats, for instance, one pair stands heads and shoulders above the rest. Kei and Yuri are a pair of lazy space cops who stumble their way into success time and again, routinely proving that all you need is some gumption and luck to be a star trooper.

What made these girls as the Dirty Pair stick out amongst the rest of their competitors can’t be summed up in a single sentence, and maybe not a single article. Every iteration of the classic show was incredibly fun and a visual delight to boot, starring two of the most badass women anime has to offer.

Dirty Pair Proves That Older Anime Is Cool Too

Newer anime fans are generally averse to shows that came out a generation or two before they got into anime. That’s held true for every subsequent generation of fans that have gotten into the medium.

Today’s fans don’t watch anything pre Evangelion and the Toonami Generation pretty much cuts out at Akira save some signature Miyazaki movies. Of course with the vast amount of anime out there, you might feel like you don’t need to dig into the old with so much new to watch. However, fans who don’t do their homework are missing out on some amazing stuff.

Every single episode of Dirty Pair is a delight to watch; Great fun with neat, light-hearted sci-fi action coupled with an eye-popping aesthetic that still impresses to this day. A warning though, getting into the show might open a pandora’s box of aesthetic 80s anime goodness you just won’t be able to resist. 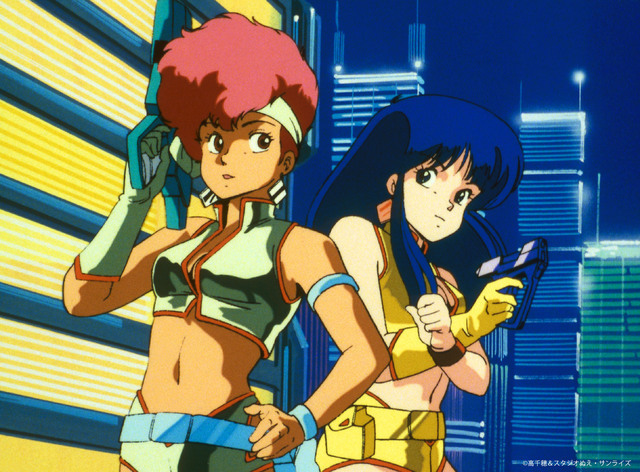 What Set Yuri and Kei Apart From The Rest

Before most of us were even born the titular Dirty Pair, Kei, and Yuri whose last names were never revealed, were whooping butt and taking names. These girls were unapologetically feminine in an empowering way, unapologetically themselves despite when their over the top personalities weren’t doing them any favors and were happy to unapologetically kick your ass.

These girls are strong in both character and attitude, certainly unwilling to listen to anyone’s BS. Somewhat hedonistic and generally out for themselves, Kei and Yui only do exactly what they want to do, generally refusing to take outside advice as a rule. Sure they’re both quote unquote looking for boyfriends and love but when push comes to shove they aren’t about to compromise a single aspect about themselves for any man.

Way before ‘strong female character’ was a phrase people would throw around a lot, these two were breaking the mold.

A Special Shouts Out To Dirty Pair: Project Eden

Many consider the feature-length Dirty Pair: Project Eden to be the greatest piece of the franchise. Also known as Dirty Pair The Movie, the increased production values went full-on towards making the show’s iconic aesthetic and charming battle scenes bigger and better than ever.

Some have criticized the film for being a little silly, and while that’s true at times it also has true moments of wonder. It’s the kind of stuff that we imagine the 80s was made out of, the stylistic cream of the crop. If you’re not sure whether you want to commit your time and money to the Dirty Pair franchise with its numerous entries, give Project Eden a shot.

Even if you feel like you won’t want to watch more after, this film is extremely worth your time.

Yes, Even Dirty Pair Flash Is Worth Watching

Dirty Pair Flash sometimes gets flack from vintage fans for a couple of reasons. The series was a 90s OVA alternate universe soft reboot of the classic 80s series. Furthermore, Kei and Yuri’s iconic red and blue hair has been swapped for some arguably garish extreme hairstyles that many argue don’t really suit the series.

However despite the hair change and being a non-canonical entryway made after the fact, Dirty Pair Flash sports some pretty good story-telling. In particular, the second Dirty Pair Flash OVA series marks a (slightly) more serious turn for the duo and we think it actually works pretty well.

Doesn’t get 90s grimdark yet the new tone imparts a bit more weight to what’s going on.

You Can Buy Dirty Pair In America, But Only On DVD

Way back in the day, the Dirty Pair franchise was made available by a number of different distributors over the years. The old OVAs, as well as the film Project Eden, were originally licensed by the godfather of anime licensing Streamline Pictures as well as a release by Orion Pictures. Later on, ADV Films had relicensed those works, as well as the TV series and Dirty Pair Flash.  Now the entire franchise has been rereleased for the second time from the fine folk at Right Stuf’s Nozomi Entertainment.

However, they’ve only released the franchise on DVD.

Regarding those who still collect physical media in today’s streaming era, a fair amount of us prefer to hold out for Blu Ray editions of anime when they exist. For a long time, Dirty Pair didn’t have a Blu-ray release in Japan, which is why Nozomi only had DVDs available until this point. As of 2019 though, Japan’s started to release all the various parts of Dirty Pair on the higher format medium and we hope Nozomi Entertainment will follow suit soon.

Thankfully they’re usually pretty good about that kind of thing.

Dirty Pair had an American Comic run that periodically released 28 issues from 1988 through 2002 written by Adam Warren who would go on to do Empowered for Dark Horse Comics, who put out some of the mini-series. We don’t see American comic adaptations of Japanese works as much as anime, although Attack on Titan had some, so this is a particularly novel work.

Dirty Pair is Finally Getting a Blu-Ray Set In Japan