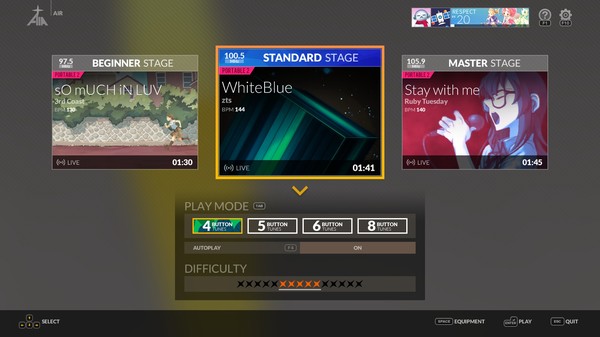 Neowiz is proud to announce that DJMAX RESPECT V is making its way to PC players via Steam this Winter. With over 150 songs , there has never been a DJMAX game quite so robust and feature-packed with new content that’s never been played in the series. Songs from top electronic artists like Marshmello and Porter Robinson are joining the fray, along with special collaborations with Riot Games’ League of Legends.

“We’ve been dying to bring DJMAX back to the PC for a long time now,” says Ji Soo Moon, CEO of Neowiz. “After Respect had such success on PlayStation 4, we knew we had to bring it to the PC in a big way with more features and music. Adding in competitive online play is just another way to give the game’s hardcore fans what they’ve been craving.”

For the first time since DJMAX Online, competitive online play will feature prominently in DJMAX RESPECT V. DJMAX RESPECT V will support up to seven (7) players in online matches as well as 1vs1 ranked ladder matches where players can play other players with similar skills, and climb the leaderboards based on their performance.

DJMAX RESPECT V will launch on Steam Early Access December 19th. The time in Early Access will be used to test the series’ new online game modes, and the full release is expected in early 2020. Rocky Studio and Neowiz are fully committed to keeping the Early Access period short and focused.