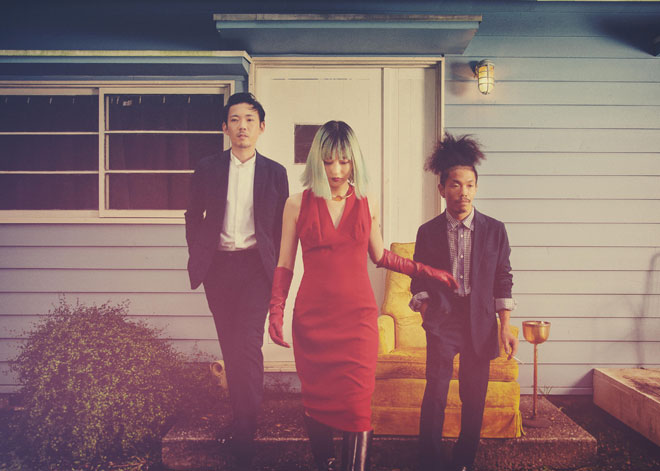 In this feature, OTAQUEST aims to help introduce some of Japan’s best musicians to the world. Today, a band borrowing from a wide array of styles — dance-pop, electro, ‘city pop,’ funk and so much more — to create a bright and positive sound that has made them one of the more upbeat outfits going in the nation. Just recently, they’ve experienced newfound attention for a smooth ballad that has become one of 2021’s biggest hits.

Awesome City Club creating one of 2021’s biggest J-pop hits is not really a surprise, but feels like a left-field development. The trio provided a song for the recent film Hanataba Mitai Na Koi Wo Shita, while also appearing in the feature itself. That work, ‘Wasurenai,’ has proven to be a huge hit on its own, enjoying success on subscription streaming services such as Spotify, while also amassing over 14 million views at time of writing.

Watch the video for it below.

It doesn’t feel all that long ago that Awesome City Club (then featuring more members) were emerging in 2015 as one of the faces of ‘neo city pop,’ a media-generated term for a wave of artists melding funk and rock in a way reminiscent of bubble era pop. Nevermind they weren’t nodding to that period whatsoever, this was how they were introduced to the world. They built a solid following, releasing singles and albums, while even getting to play abroad in Taiwan. While they faced some challenges via line-up changes, they found a lane to operate in, creating bubbly pop rock drawing from a mix of styles. They’ve been putting in the work.

Now, that has bloomed with a massive hit. To help listeners get familiar with one of 2021’s breakout groups, OTAQUEST offers a dive into Awesome City Club.

Awesome City Club formed in 2013, in Tokyo. Originally starting as a four piece, they proved to be just ahead of the popular curve by embracing funk-indebted rock glazed by synthesizer melodies. They uploaded songs to SoundCoud where they earned a fair amount of attention, bucking the standard of fencing off their music on only-at-gig CDs in favor of using the tracks themselves as promo distributed for free. Early tracks like ‘Children’ made space for all-together-now chanting and locked-in grooves, all centered around lyrics choosing to embrace a more positive view of life (something that was totally possible back in the first half of the 2010s). The most important development early on for them at this point, though, was recruiting vocalist and synth player PORIN to join them in 2014, adding a new sonic dynamic to their sound that bubbled up almost immediately.

Despite a steady stream of attention… and being brought into the modern ‘city pop’ revival, besides having way more in common with then-contemporary global pop… Awesome City Club avoided rushing anything out, opting instead to release standalone songs into the digital ether. Wisely though, they did package these together into the compilation series Awesome City Tracks, released via the major label Victor Entertainment. These collections of bright-and-boisterous singles are among the strongest releases in the group’s entire catalog, capturing them at their most ecstatic and documenting a very specific upbeat mood in the country that would soon become standard place (and then wilt entirely come 2020). Great pop, and a durable time capsule.

After making a splash in the mid-2010s, Awesome City Club kept at it as the decade went on, releasing via a major label and playing larger shows as they continued to share songs primarily through digital platforms. What changed, though, was that mainstream J-pop mirrored the sound and especially mood they were creating. Acts like Suchmos and never young beach traded in more laid-back city sounds, but the general message was the same: we’re young, we’re living, and we’re having a great time. The next two Awesome City Tracks releases only made this more clear, highlighted by a giddy all-emotions-to-the-front cut like ‘Don’t Think, Feel.’

Following a ‘best-of’ set that basically boiled down the existing comps into one biggie-sized package, Awesome City Club released their first proper full-length album Catch the One, which further found them exploring this party-starting funk-pop, with added brass worked in, putting it in the same stylistic lane as what Bruno Mars was up to at roughly the same time. Change, though, was on the horizon.

Recent times have seen a lot more shifts for Awesome City Club, starting with a move away from Victor in favor of J-pop old guard Avex Entertainment, including the release of their second album Grow apart. By this time, their original approach to releasing music on platforms like SoundCloud had ended completely; they had become part of the Japanese music industry proper, although they dodged the particularly crushing period where everything was reduced to minute long ‘short versions’ on YouTube.

Their music didn’t change too much, though their Avex releases saw a bit more experimentation, drifting towards heavier use of electronics and pivots into less joyful territory. By this point, the mood of J-pop had changed totally, with hits from YOASOBI or, later on, Ado revealing a new taste for the dour. Awesome City Club sounded like reminders of a more positive time in the country, though dipping into that instant nostalgia wasn’t always a bad thing. Though more change was coming… the group found themselves reduced to a trio around this time.

This year’s Grower offers actual sonic change for the project. Besides featuring the ballad-adjacent ‘Wasurenai,’ it also finds them dabbling in sparse dance-pop (‘tamayura’) and lonely jazz-tinged funk (‘Nothing on my mind’). They still pack in plenty of feel good, but Grower shows some real… well, you know. Now, they find themselves facing a new path: try to repeat the success of ‘Wasurenai’ (one of the overall weaker tracks here from my perspective) or continue experimenting? Whatever they do, nothing should surprise with them anymore.

For all of Awesome City Club’s early funk-pop bluster, ‘Lesson’ stands as their first great song thanks to how they let the glow of the synthesizer hang over the song, letting the ecstasy of the emotion guiding this song linger.

Despite being their most obvious stab at Bruno Mars’ retro-pop revival sound, Awesome City Club just nail it on the buried treasure that is ‘What You Want.’ Again, letting the electronic element be more prominent goes a long way.

So damn joyous you temporarily forget the music video is an ad for a now non-existent GAP store. Forget any of that cynicism; this is goopy dance-pop at its most ripped-from-diary, and an absolute classic of the mid-2010s ‘young and optimistic’ city sound period.

The band start creeping towards less colorful lyrical territory (this is all about finding escape from drudgery) but they still create one of their finest escapist hooks along the way.

The best example of the project: trying a new sound out and doing it well. For a group so adept at maximalism, space sounds really good on them.