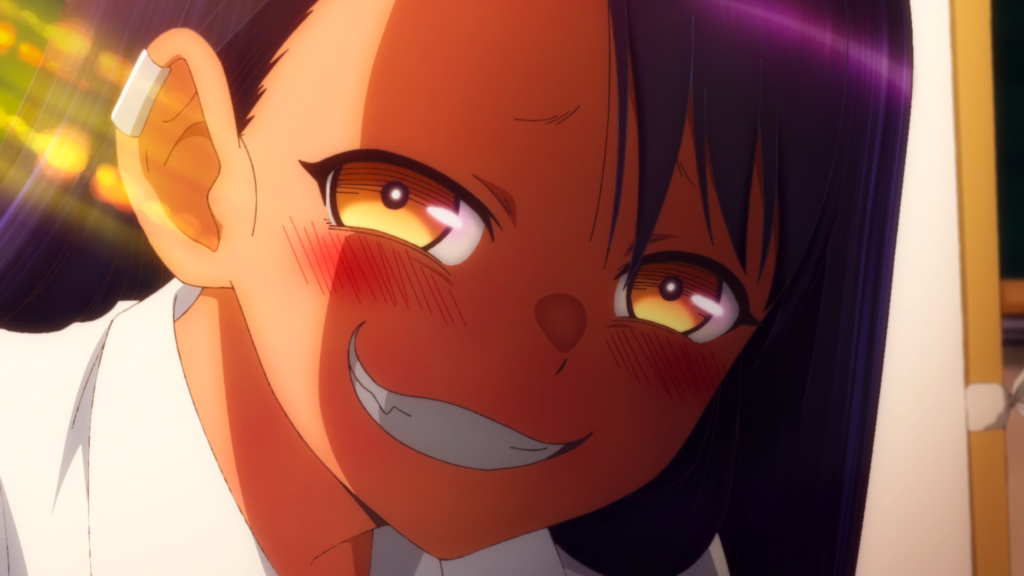 Don’t Toy With Me, Miss Nagatoro episode 1 has been a long time coming. I first covered the manga more than three years ago back in 2018, drawing a link between it and the great pioneer of ‘tough love’ love comedies, Teasing Master Takagi-san. Since then, the series has only grown in popularity, finally getting licensed by Vertical in 2018 and now receiving an anime adaptation from TMS Entertainment. With this in mind, did it live up to the hype?

Yes, and in surprising ways.

Nanashi’s original web manga is a slice-of-life series par excellence, hardly ever deviating from the school setting and exploring the twists and turns of the teenage heart. Most series like that don’t get very interesting adaptations, to be honest, but the very opening moments of Nagatoro episode 1 make it clear that this series is different: it’s an anime-original sequence that captures the more wistful side of the series that isn’t necessarily stated in its initial, bullying-filled premise.

Even when Nagatoro episode 1 does get down to brass tacks and delivers the bullying we’ve all been waiting for, it does this with a surprising amount of grace and a clear understanding of how the source material might be best brought to life. There’s a focus on character acting and strong voice work that permeates throughout this episode: little moments such as how Senpai wipes the sweat off his hand before going to touch Nagatoro’s hair are lovingly brought to life, alongside lines like ‘Tell me your n-name.’ It really feels like we’re seeing these two characters interact on screen, making the whole episode into a much more engaging experience.

TMS Entertainment could’ve very easily delivered a direct adaptation, relying on the strength of the premise and the voice cast alone to carry the show: Sumire Uesaka (Nagatoro) and Daiki Yamashita (Senpai) are big enough names to draw viewers in. Yet, small changes in Nagatoro episode 1 (such as the decision to cross cut Senpai’s approach towards the library with Nagatoro and friends being in there) reveal the care that has been taken in this adaptation.

In one particular case, the production team took one step too far in trying to make the series work in animation: when Senpai and Nagatoro are on their way home towards the end of episode 1, she pushes him, sending him rolling down the street and into the river.

In the manga, Senpai simply falls down, which accomplishes exactly the same thing that the anime was trying to do (show Nagatoro that she went too far this time) without breaking from the largely realistic and understated approach. What makes this departure even more infuriating is that the length of the anime-original gag leaves no time for Nagatoro’s important line at the end of the original manga, where she declares that she doesn’t need to know Senpai’s name and will simply call him ‘Senpai.’

You can watch Don’t Toy With Me, Miss Nagatoro as it airs via Crunchyroll.