Doraemon: A Gadget Cat For Every Occasion 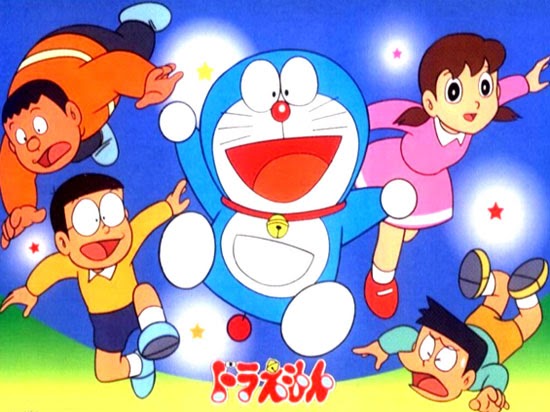 A robot time travels back to the past in order to help a boy and save the future.  No, it’s not a Terminator movie.  It’s Doraemon.

Doraemon tells the story of Nobita Nobi and his robot cat from the future, Doraemon. Whenever Nobita needs help with school, sports, homework, popularity, bullies, friends, family or just plain boredom, Doraemon has a device or gadget which can help.

These devices fit into Arthur C. Clarke’s saying that “any sufficiently advanced technology is indistinguishable from magic.”

Of course, there is often some flaw to the device, or else Nobita inevitably abuses its power.  Nobita learns an important moral lesson at the end; one which can hopefully be shared with Doraemon’s youthful intended audience.

Doraemon got its start as a manga in 1969-1970, right in the middle of the “Japanese economic miracle.”

At the time, Japan was starting to recover from the devastation of World War II, but it wasn’t the economic powerhouse of the 1980s yet.   The super-fast Shinkansen (“bullet train”) had started running between Tokyo and Osaka, but the Sony Walkman and Nintendo Entertainment System didn’t exist yet. Honda was still mostly known for motorcycles, not Accords and Civics.

This period saw a lot of technological advances. Japan was betting the future on electronics, automobiles and new technology.  That future would also require engineers and technological wizards.

Doraemon was the right manga/ anime at the right time. What could be a better symbol of a technological future than a robot cat?

Back to the Future

Doraemon’s origin story goes something like this: Life is terrible for the Nobi family in the 22nd century. And Nobita is to blame. It seems that Nobita messed his life up so badly that his old problems remain problems for his descendants far into the future.

Nobita freaks out when he first meets Doraemon (especially since the robot cat pops out of Nobita’s desk drawer).  But eventually, he gets used to the idea of a cat from the future. In fact, the neighborhood kids like Doraemon, and Nobita’s parents don’t ever seem to mind.

(This is different from some shows and movies, where magic, superpowers or advanced technology has to remain hidden from the public.)

Doraemon is entertaining on many different levels.

At its base, it is a fun story about a little boy and his robot cat from the future.  The robot cat has dozens of strange gadgets, which he can retrieve from his front pocket.

So, if Nobita is having trouble with his homework? Doraemon can pull out a helmet which can make Nobita smarter. Or a special pen which will only write correct answers.

Nobita is having trouble with Gian, the local bully?  Doraemon has devices to make Nobita stronger than Gian.  The cool kids are going skiing, but Nobita doesn’t know how?   Doraemon creates an indoor ski slope.

The show has some similarities to the American cartoon series The Fairly OddParents (2001-2017). Average kid with an alliterative name (Nobita Nobi/ Timmy Turner) needs help, and he gets it in the form of a robot cat/ fairy godparents.  The technology/ magic isn’t perfect, and often causes problems. Status quo prevails and things back to normal.

Moral of the story

Of course, there is more to the story than just time travel and wacky gadgets.

A lot of the gadgets aren’t perfect. They have downsides or unwanted side effects. These flaws allow Nobita (and the audience) to learn a good lesson.

For example, devices designed to help Nobita cheat at school will break or get lost at inconvenient times; the implication is that there are no easy shortcuts to learning.

Invisibility devices have a lot of naughty, mischief-making potential. Nobita can sneak around and watch others. But he gets too embarrassed to spy on Shizuka, the girl he has a crush on — it’s not nice to spy on people.

Bodyswap devices, instant disguises and other transformation gadgets allow Nobita to learn about other people’s problems. Life isn’t easier for celebrities or for girls.

In the first manga chapter, there is a subtle moral about the present, the future and the consequences of our actions. If we mess things up, the future will be messed up as well; if we improve ourselves, the future will get better.

It’s a bit odd, if you stop to think about it, that the Nobi family in the future can even afford a robot cat if their life is so bad.  The answer seems to be that Doraemon is a broken or malfunctioning robot cat.  They can’t afford a better one.

Many time travel stories show that time travel can change the future.  Indeed, that is the whole reason why Doraemon was sent back in the first place.  So, what happens when Doraemon’s mission is complete? Will the future change? Will Doraemon have to leave?

The first manga chapter doesn’t go into detail about that. Great-great-grandson Sewashi tells Nobita not to worry about it. Sewashi says that he will still be born even if the future changes, and adds metaphorically, “there are many ways to get to Osaka.”

In the 106th chapter of the manga, Doraemon does leave. Nobita can take care of himself, and Doraemon is no longer needed (“Adieu, Doraemon”).

The sad farewell doesn’t last long, and Doraemon returns a little bit later. By this time, Doraemon has become more than just a robot cat, he’s a friend.

Doraemon has a small cast of characters. These characters remain largely the same throughout manga, anime and movies.

Doraemon, Nobita, Shizuka, Gian and Sueno are the main five. Nobita’s parents are important as well.

In manga chapter 57, Doraemon’s sister Dorami shows up. Dorami is younger than Doraemon. She stays in the future when she’s not visiting Doraemon and the others.

Gian has a younger sister, Jaiko.  In some versions of the future, Nobita marries her. Jaiko looks a lot like her brother. 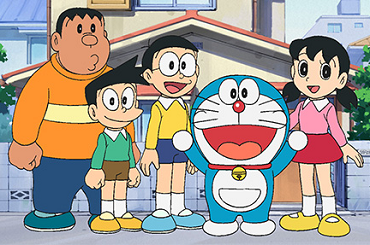 The 1973 version ends with an adaptation of “Adieu, Doraemon,” called “Goodbye, Doraemon.”   The basic theme of the episode is the same as in the manga — Nobita no longer needs Doraemon, so it’s time for the robot cat to return to the future.  The episode leaves open the possibility of Doraemon returning.

The 1979 anime doesn’t continue the story where the 1973 version left off. But it doesn’t re-tell Doraemon’s origin story, either. Some episodes are adapted from the manga, and some episodes are completely new stories.

In 2005, a third version of the Doraemon anime was created.  The 2005 version sticks closely to the original manga, with a few changes. Some changes were made to appeal to a more modern audience – for example, the adults don’t smoke as often.  Items which resembled pills or medicine in the original Doraemon were changed to avoid drug references.

Like with the 1979 version, there is no origin story to the series, and there hasn’t been a “Goodbye, Doraemon” ending — yet.  As of April 2020, the 2005 version is still continuing. There have been almost 600 episodes.

Nobita the Movie 2017: Great Adventure in the Antarctic Kachi Kochi sends Doraemon and his friends out on an adventure in Antarctica.

Stand by Me Doraemon is unique in the Doraemon franchise for being a 3D computed animated film.

The 2014 film combines various different Doraemon short stories into one story.  Doraemon’s origin story is here, along with the farewell episode.  The movie has a happy ending.

The store Uniqlo has a Murakami Takashi plush doll of Doraemon. The doll, available at Amazon, features the robot cat covered in pictures of the characters.

The Doraemon X Takashi Murakami short-sleeve graphic T-shirt is currently out of stock at the Uniqlo online store.