A shogi curse plagues the pages of Weekly Shonen Jump. After all, it was only last year that Jump launched their last shogi-centric series Momiji no Kisetsu, which ended up getting axed not long after. Even so, for many reasons, getting a successful shogi series off the ground is important for the magazine, and Kentaro Fukuda’s Double Taisei (Futari no Taisei) might be just the ticket.

I first heard about Double Taisei back in April, when it was announced alongside Beast Children and Tokyo Shinobi Squad, all three of which were joining Masashi Kishimoto’s new series Samurai 8: The Tale of Hachimaru in shaping the future of Weekly Shonen Jump.

But I was hardly excited for Double Taisei. In fact, more than anything, I was scared… afraid that we’d see a repeat performance of Momiji no Kisetsu, which met an unfortunate end as readers were turned off by its laser-focus on the game of shogi itself and a severe lack of compelling characters.

Fortunately, however, fourteen chapters in and Double Taisei seems to have learned the mistakes of its predecessor.

Double Taisei and the Shogi Curse

Before discussing Double Taisei itself, it’s perhaps important to outline why getting a successful shogi series off the ground is clearly such an important goal for the editorial department over at Weekly Shonen Jump.

This is because shogi has simply come into fashion as of late, as the manga-reading public lap up such series as Shirow Shiratori’s The Ryuo’s Work is Never Done! and Chica Umino’s March comes in like a lion and appreciate the very different, yet very effective ways that they use the game of shogi as a basis for storytelling. You could even add Souichiro Yamamoto’s newly launched slice of life series Soredemo Ayumu wa Yosetekuru to that list, as well.

If Weekly Shonen Jump had a strong shogi series in serialization, then it would attract those readers who are looking for more shogi action to the magazine and the Jump brand, which would, in turn, drive up sales; it’s business 101. The question begs itself, however: what even makes a successful shogi series, and is Double Taisei shaping up to be one? 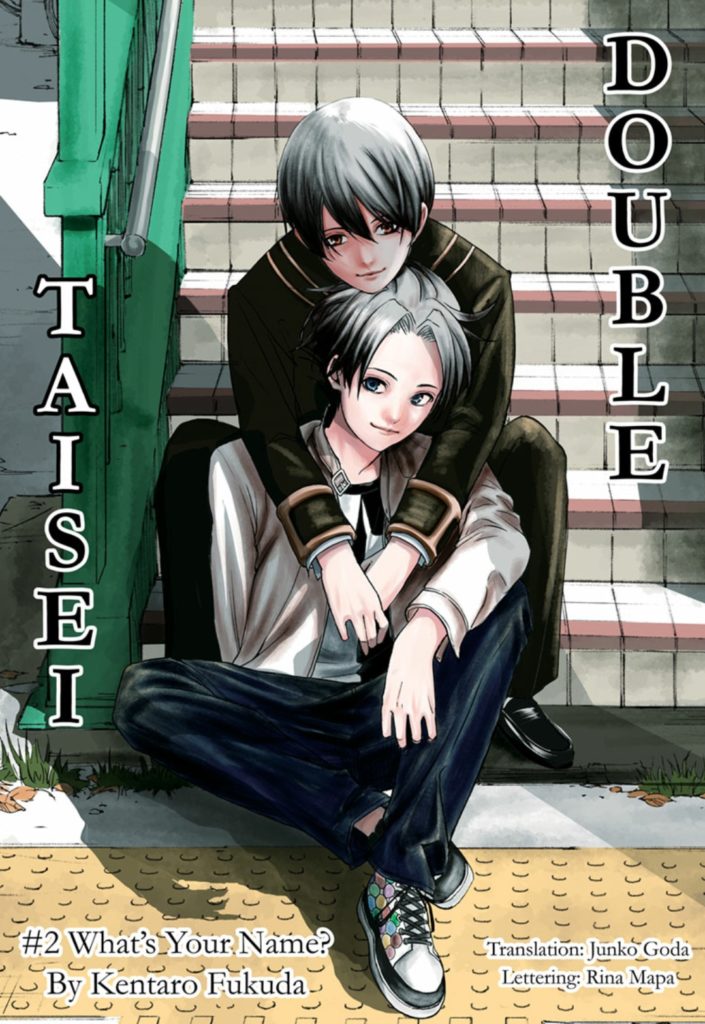 In my opinion, what makes a successful shogi series has nothing to do with shogi itself. In fact, the only reason that so many series choose to utilize the game of shogi is simply that it’s fashionable right now. You could replace shogi with any game and it wouldn’t matter, at least in theory.

That’s why one of the most important things for a shogi series to do is, ironically, focus less on shogi than developing other elements external to the game, such as story and characters. Not doing so was precisely what lead to the downfall of Momiji no Kisetsu; it focused too much on the games themselves, leaving characters and story by the wayside.

This might all seem quite laughable from a certain perspective. After all, why would you make a shogi series just to downplay shogi altogether? But the very nature of shogi as a game is what causes all of this.

Shogi has been played in Japan for a very long time, with standard rules being fixed sometime in the 16th century. Finding any new drama or excitement from the game, then, is very hard, almost impossible, in fact, unless you’re a shogi nut.

And even if you do find some new excitement, it’s very unlikely that readers are going to be as excited as you are; because we ultimately relate more to story and characters than we do to wooden tiles moving across a board.

With all that in mind, has Kentaro Fukuda made Double Taisei into a shogi series with the potential for success? Spoiler alert: I think he has.

Double Taisei follows the story of Taisei Amado, a middle school student who’s about to qualify as a pro shogi player. But he has a secret: he’s actually one of two personalities that inhabit his body, with his other half ‘Sei’ only coming out at night.

By the way, that’s essentially the plot of the entire first chapter and the main narrative hook for the series, so sorry for ruining that for you. But even with that knowledge, reading the first chapter and experiencing that hook is bound to make you want to read more: a hallmark of good, effective storytelling by the author.

Moving forward in the story, you’ll also no doubt be impressed with how Fukuda develops this hook beyond a simple twist and into something truly compelling, making for some excellent character drama. 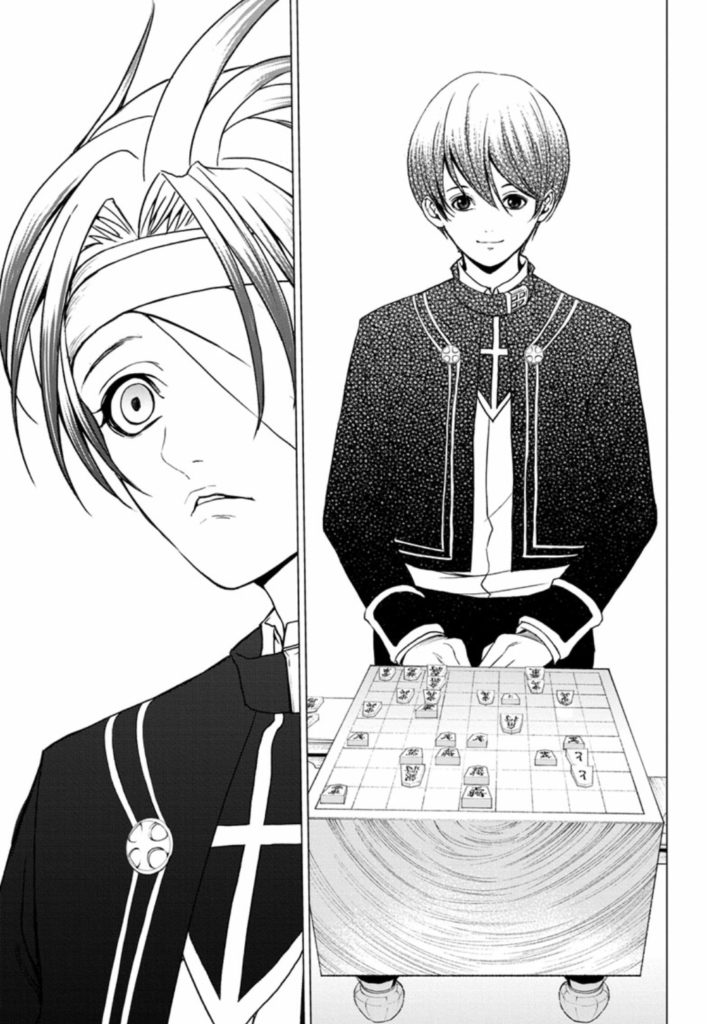 Can you imagine having to share your body with someone else? First off, that’s terrifying. But wouldn’t that also be really lonely?

That’s certainly the prevailing feeling for Tai, who, despite sharing a body with his other half, Sei, has never been able to ‘meet’ him, as they swap in and out of the main body of ‘Taisei’ every day and night.

Shogi presented a way for the two to communicate, however. Every time they swapped, they’d each make a move on the shogi board, slowly playing out a game of shogi one move at a time over weeks, months, and years. It was this experience which then got Tai interested in shogi, to the extent that he’s about to qualify as a professional while still only being in middle school.

The thing is, Tai has never won a game against Sei. Not once over their entire lives. It’s, therefore, Sei who really has the talent for shogi, much more so than Tai. But since Sei is limited to only coming out at night, he’s never been able to capitalize on this talent, instead being confined to the twilight hours, hanging around the streets of Shinjuku and bouncing from hobby to hobby. 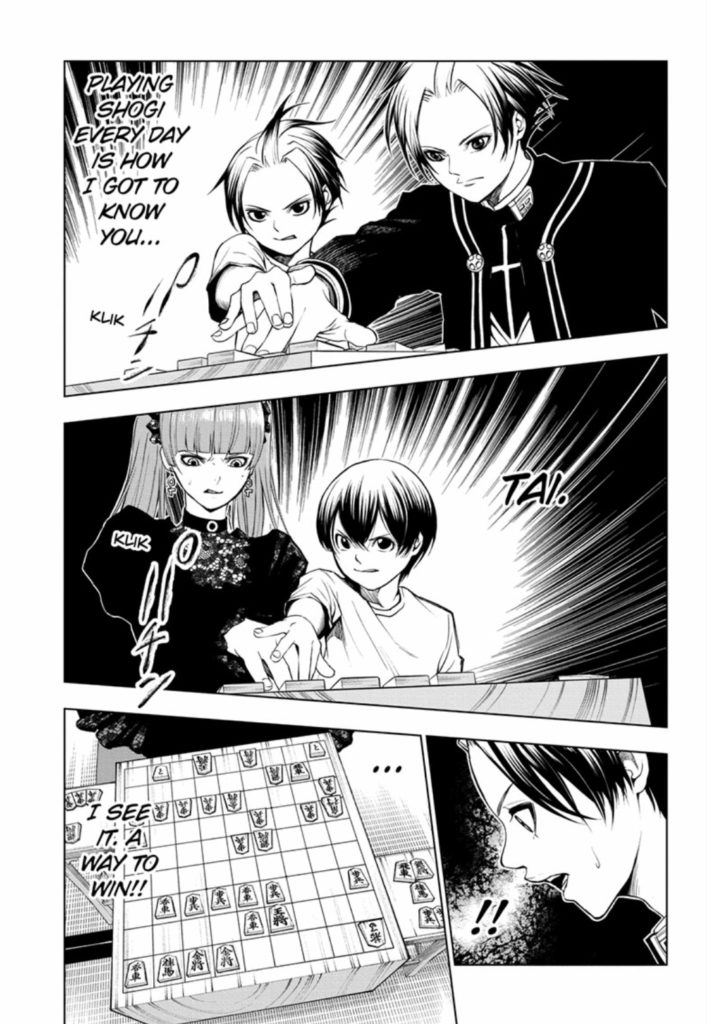 There’s, therefore, a sort of guilt on Tai’s part towards Sei, as he feels like he’s holding his other half back. But an opportunity to resolve this quickly arises, as the two mysteriously swap cycles after an accident and Sei begins to come out in the day, with Tai coming out at night.

But will this resolve the feelings that have been building up between the two? How will Sei react to his newfound freedom? More importantly, how will Sei deal with the challenges presented by Tai’s qualifying matches to become a shogi professional.

The Future of Double Taisei

The characters of Tai and Sei are, in this sense, incredibly interesting and present many interesting questions for the narrative to explore. They also provoke a reexamining of many of our own received ideas surrounding multiple personalities, framing them as beautifully tragic rather than a symptom of illness.

What’s most important about all of this, however, is that it remains entirely external to the game of shogi. In fact, you could replace shogi with any game and it wouldn’t really have an effect on the overall story. In this respect, Double Taisei is confidently avoiding Momiji no Kisetsu’s unengaging over-focus on the game of shogi and has become a compelling story as a result.

Even so, if you remember, there was another important problem that dragged Momiji no Kisetsu down: a lack of interesting characters. In order to fully learn from the mistakes of the past, the question, therefore, becomes: has Double Taisei created an interesting cast of characters? 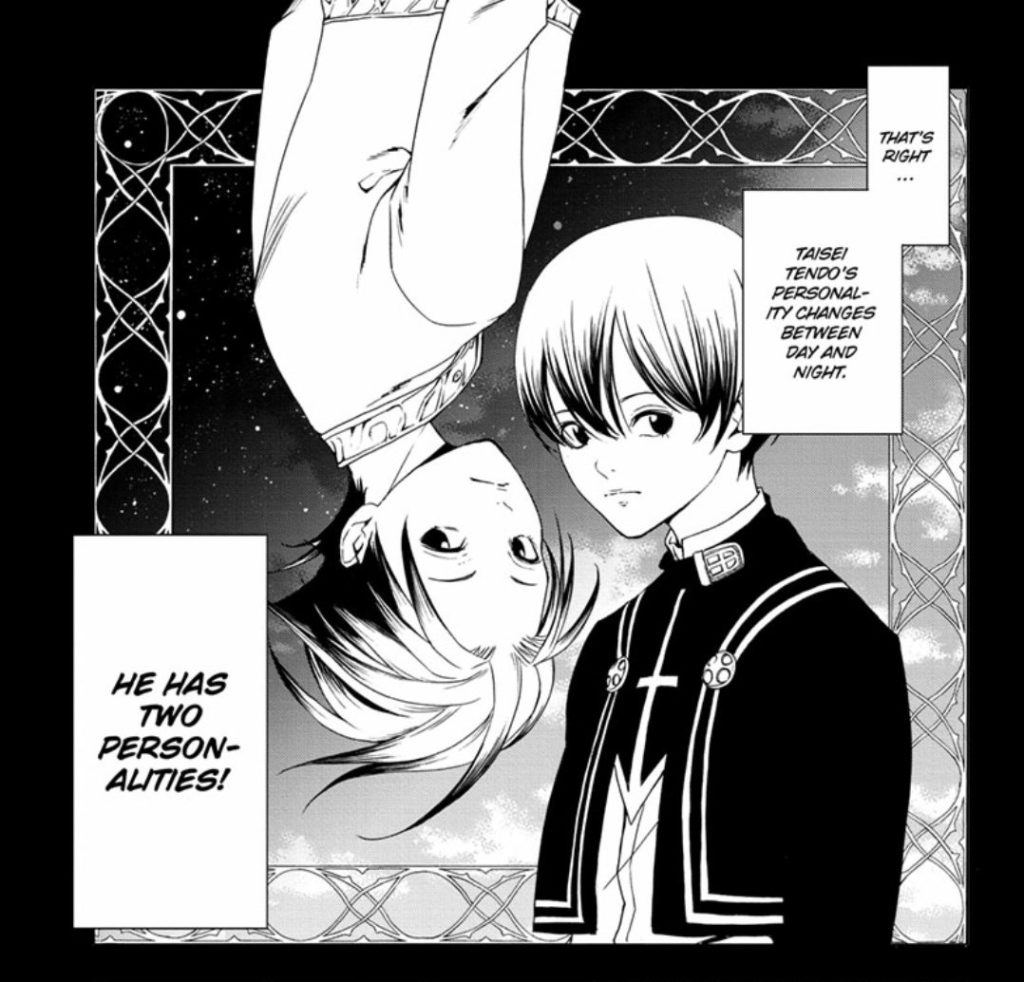 As I hope you’ve gathered, the main duo of Tai and Sei are pretty compelling in and of themselves. But Kentaro Fukuda hasn’t stopped there; far from it. Slowly but surely, he’s been building up the series’ side characters week after week that provides support to the already compelling, but more narrative-focused duo of Tai and Sei.

Take, for example, the character of Izumi. He’s playing shogi to provide for his family, but excels at the game due to his ‘special ability’: by blindfolding himself and cutting out any visual stimulus, he can ‘hear’ how good a move is simply from the sound, which then forms a distinct shape in his mind’s eye that becomes more beautiful the better the move is. 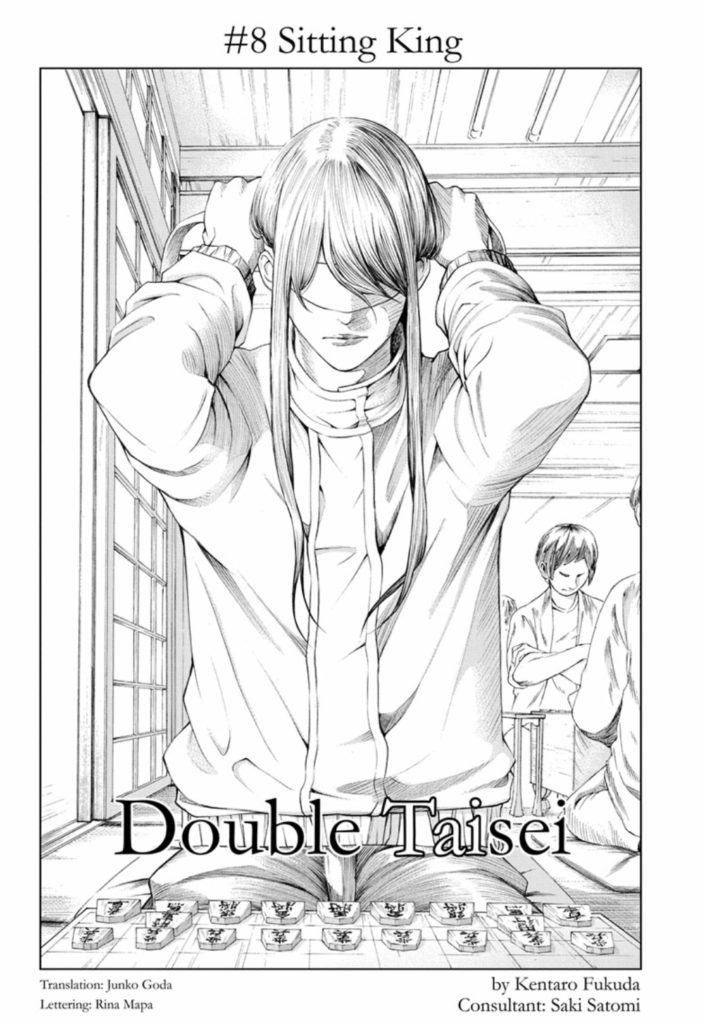 There’s also the stuck-up Yaotome, whose brain is a supercomputer and can memorize game records. This is a character that always appears in these types of ‘game’ manga, but what makes her interesting is that Fukuda has reincorporated her back into the manga with not just a hairstyle change, but a change in strategy as she sees the weakness in her method after going up against Sei. 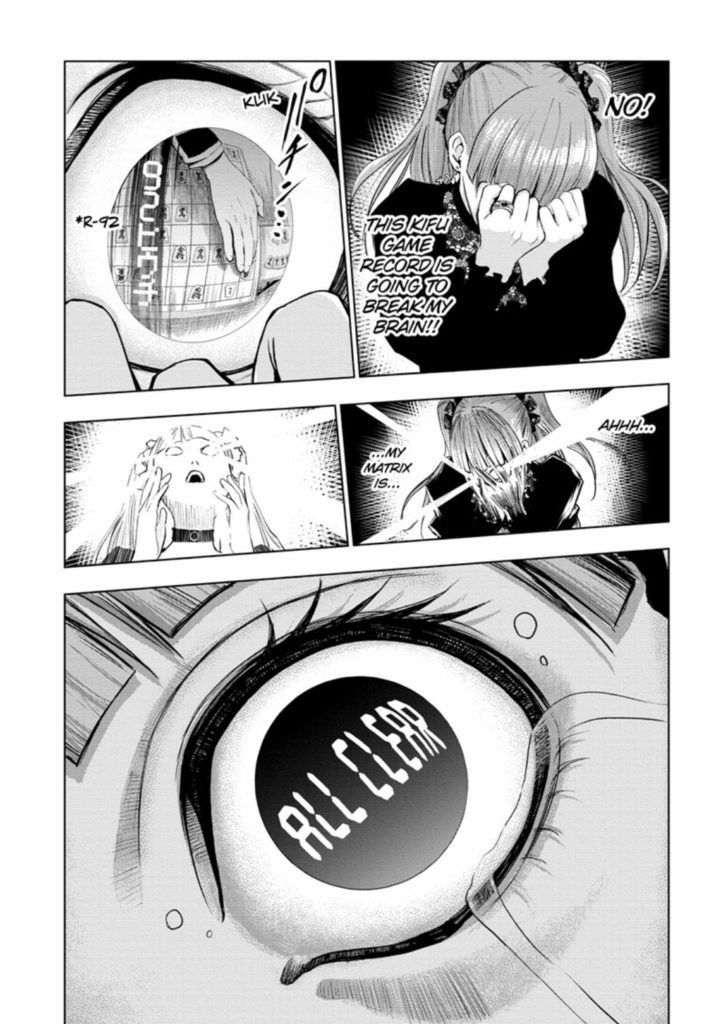 Yaotome is, in fact, one of four characters that the current arc of the manga is set on introducing as Tai and Sei battle it out to become a shogi pro. This means that a steady stream of interesting characters as the weeks go on is all but certain over the coming weeks and months. 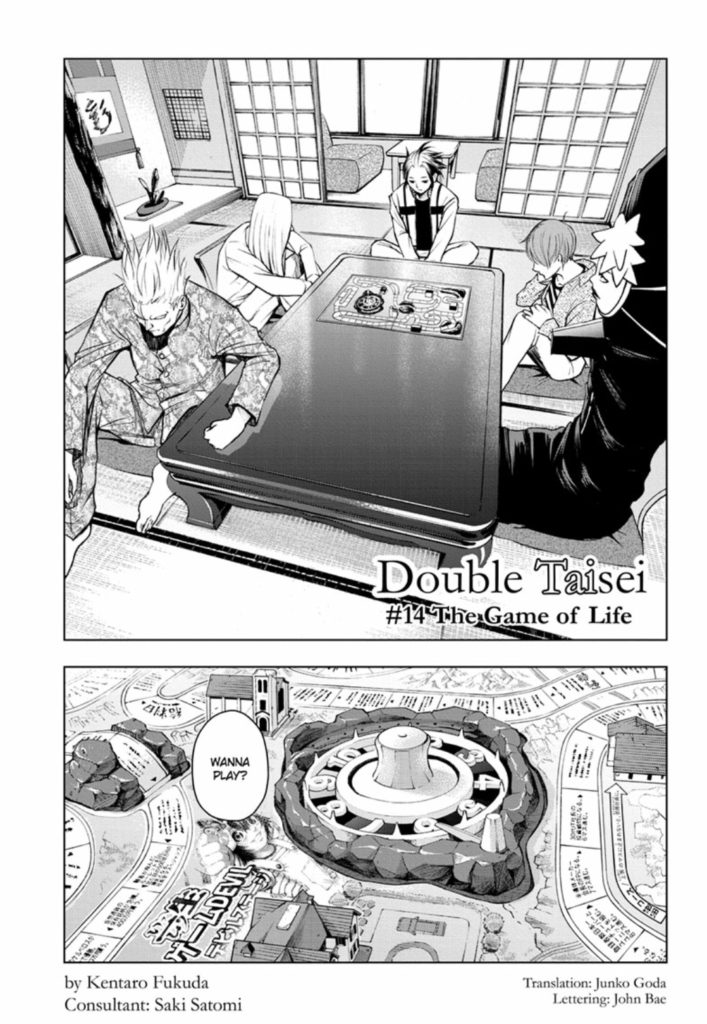 The fact that there’s only really one uninteresting character, that being Tai and Sei’s childhood friend whose name I don’t care to find, should also clue you into how well Fukuda has been faring so far against the mistakes of Momiji no Kisetsu.

Another thing that should be immediately obvious is how well Fukuda has been managing the pacing of the story, as he introduces new narrative elements and characters each week. These, in turn, generate new narrative questions that keep the reader engaged.

All of that is why I’m confident that Double Taisei might just be the successful shogi series that Weekly Shonen Jump has been searching for all this time. The failure of Momiji no Kisetsu might have been bittersweet, but it’s from that series’ mistakes that the editorial department and, indeed, Kentaro Fukuda have been able to craft something much, much better.

That being said, I’d be lying if I said that the series is a runaway success in Japan. Rather, it’s been languishing in the back pages of Weekly Shonen Jump for weeks now, often swapping in and out of the bottom three with Tokyo Shinobi Squad. 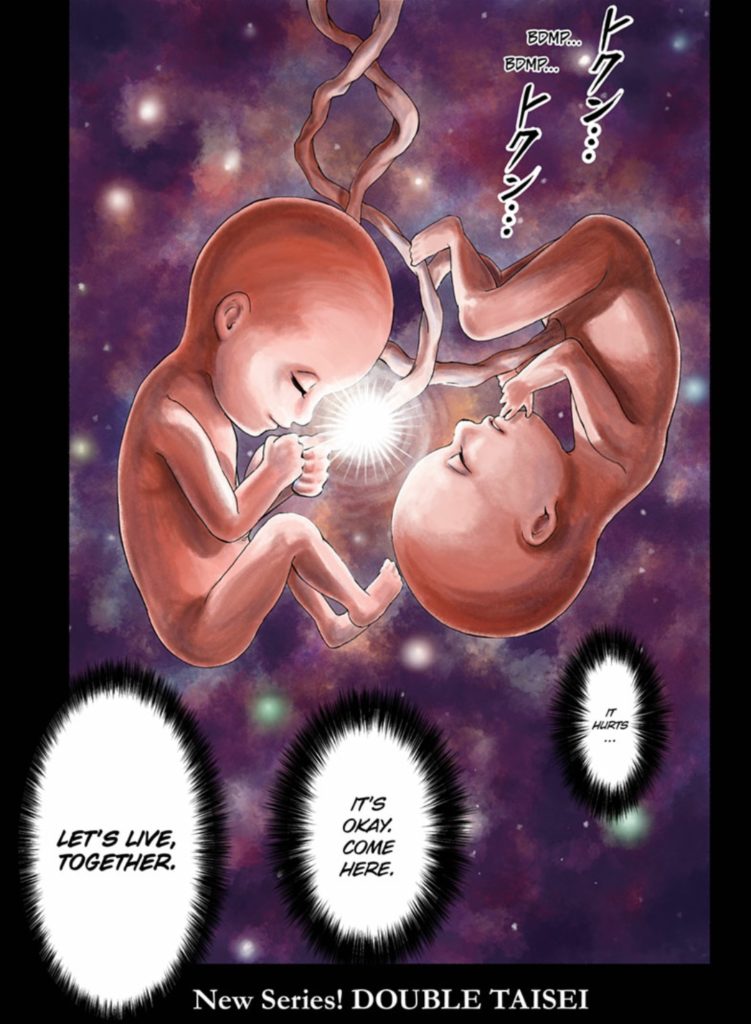 But I believe that this series has potential. Obviously, reading it each week as it releases via VIZ Media’s free Shonen Jump service has clued me into its strengths as a story, but its content matter is more suited towards collected volume release than a weekly release.

Non-battle or action manga don’t tend to do particularly well among the readership of the Weekly Shonen Jump magazine, but the strength of the Jump brand means that its collected volumes always get lots of attention. If therefore, a more suitable, perhaps slightly older audience were to find Double Taisei once it releases in such a format and spread the series’ merits by word of mouth, then we may be looking at the next big shogi hit.

In the meantime, however, you can read it for free via VIZ Media’s Shonen Jump service.