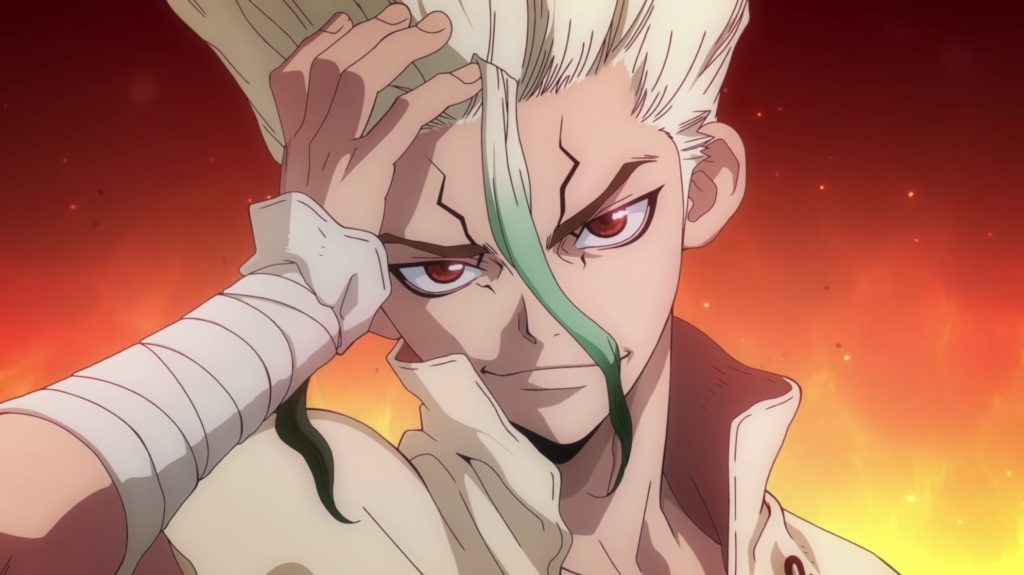 I’ve been harping on about Dr. STONE for pretty much the entirety of 2018, so to see the year close out with some information on it’s highly anticipated anime adaptation is a great feeling. Author Inagaki Riichiro and voice actor Kobayashi Yousuke, set to play protagonist Senku in the upcoming anime, took to the stage at this year’s Jump Festa in Makuhari Messe to share information about the anime ahead of it’s July premiere.

Firstly, a sizeable amount of the voice cast was announced to join Kobayashi as Senku. Playing Senku’s friend and loveable idiot Taiju Oku will be Furukawa Makoto, making this his second highly anticipated project in 2019 next to One Punch Man’s second season, where he plays the main character of Saitama. Playing Taiju’s love interest Yuzuriha Ogawa will be Ichinose Kana, a relatively new voice actor who courted controversy this year in her role as Ichigo in the TRIGGER/A-1 Productions co-production DARLING in the FRANXX. Finally, playing the series’ antagonist Tsukasa will be Nakamura Yuuichi, already well known for his antagonistic roles as Greed in Fullmetal Alchemist: Brotherhood as well as Io Fleming in Mobile Suit Gundam Thunderbolt.

We got to hear one part of that stellar voice cast in action in the PV that was unveiled during the event, which features Kobayashi as Senku. Check it out below:

I must admit that I wasn’t too sure about Kobayashi’s performance as Senku when I first watched the PV, as his pitch seemed a little high compared to what I had always imagined it to be when reading the manga. But considering that Senku is not supposed to be the average macho shonen protagonist and that such a high pitch is often associated with self-assurance and ego in anime – which Senku certainly has in spades – I’ve come to like it. Besides, what will matter is his performance across the entire show and not just a single line.

During the event, we also finally got confirmation of the studio that will be tackling the anime adaptation – none other than TMS Entertainment, who have been doing excellent work lately with their original projects such as Lupin the Third: Part V and Megalo Box. Here’s hoping that they can assemble a good team to carry on that excellent work with an adaptation this time around, especially since we have yet to receive any information on the staff working on the project.

The Dr. STONE anime will begin it’s broadcast in July of next year, following yet another highly anticipated anime adaptation in January, The Promised Neverland.