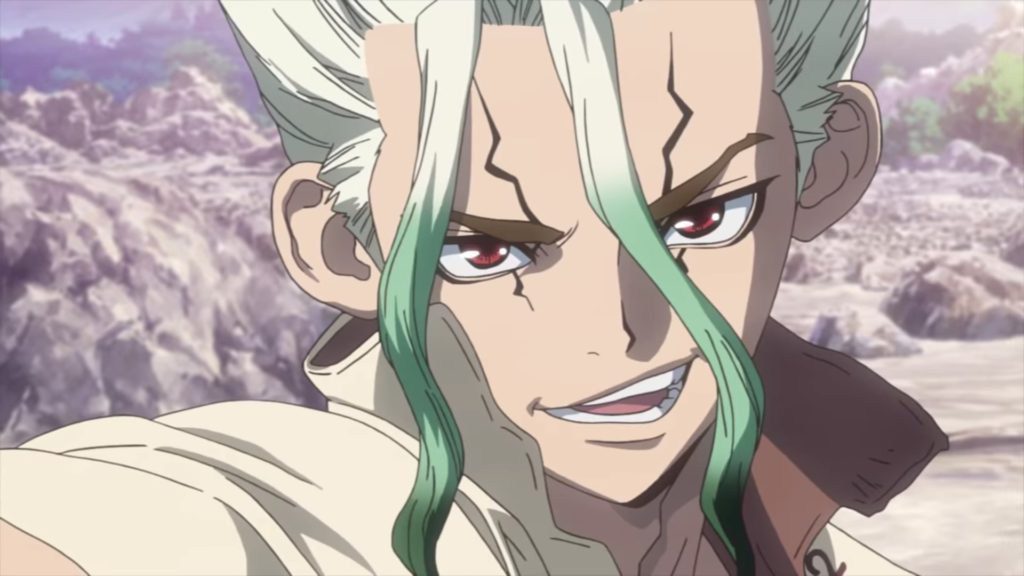 Now, this definitely wasn’t what I expected to wake up to this morning. Despite dropping a new key visual and main staff list just a couple of days ago, TMS Entertainment has just blessed us with not one, but two new trailers for their upcoming adaptation of Riichiro Inagaki and Boichi’s Dr. STONE. Check them both out below:

TMS is referring to the first trailer as the ‘Stone World version’ and to the second as the ‘Science Craft version.’ As to why they felt it was necessary to release two trailers at once, then look no further than the video’s description, where it says that the two trailers are supposed to show off the work from two different focus points.

Indeed, the trailers do have different focuses, and this very much matches with the ethos of the original work. The ‘Stone World’ trailer is more serious, showing the conflict between Senku and Tsukasa that sets the story in motion; whereas the ‘Science Craft’ trailer is more comedic, showing Taiju’s overreactions and stupidity in the face of Senku’s intelligence. In general, the original manga has always enjoyed a duality in its serious exploration of themes, ideas and scientific processes while maintaining a good sense of humor befitting of its wacky cast of characters. So I’m definitely glad that TMS understand and are attempting to engage with such a duality.

The music featured in the trailers greatly helps to reinforce this duality and demonstrates that TMS was justified in getting three individuals to tackle the music after all. The first trailer features the track ‘STONE WORLD’ from Kato Tatsuya, which lends gravitas to the drama. The second trailer then features the more upbeat track ‘Chemical Boys’ from Yuki Kanesaka, which helps in making Taiju’s screaming somewhat endearing.

This is actually the first time we’ve been able to see the show in action, and I’m pretty happy with what we’ve got. The voice actors seem to be having a lot of fun, with Nakamura Yuuichi’s performance as Tsukasa being surprisingly perfect. Furthermore, the show is rocking some fairly solid visuals, with the character designs working well in animation thanks to the work of character designer Iwasa Yuuko. That being said, some of the shots featuring Yuzuriha do look a little bit off – but hopefully, they’ll have time to fix that before the show’s premiere in July.

All in all, now that we’ve gotten some proper trailers for the upcoming Dr. STONE anime, there’s not much more I want out of the project – all that’s left is to wait. That’s a bit of shame to honest, especially considering that there’s a special stage event for the project at AnimeJapan this weekend…