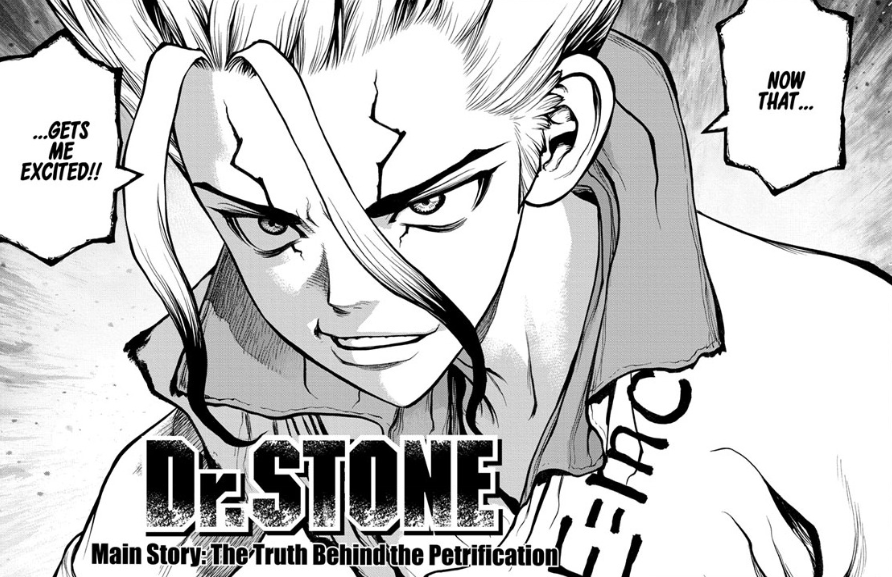 Hello there and welcome to Your Manga Week. Finding time to keep up with all the manga that releases on a weekly basis can be difficult, so I’m here to tell you what’s worth your time and what’s not. We’ll also be discussing the story and arc developments as they come. This week, we’re talking Dr. STONE chapter 138, Chainsaw Man chapter 57, ZIPMAN chapter 9, and Mitama Security: Spirit Busters chapter 23.

I suppose I should start this week’s column off by addressing the elephant in the room: the latest My Hero Academia controversy surrounding the real name of one of series’ antagonists. The reason I’m so late to the issue and why I didn’t address it properly last week was because I was originally planning to write a full article about it, but once Horikoshi and Shueisha changed the name and issued a formal apology, I considered the issue to be more or less done. There’s my stance: now that the whole thing has been cleared up, it’s no longer an issue. That doesn’t mean that there was no merit to the outrage – as per the point I was going to make in my article, the problem of Japanese war memory runs far deeper than simply Weekly Shonen Jump and Kohei Horikoshi – but there’s not much point in dwelling on it any longer. With that out of the way, let’s get on with the manga.

The fight between Minister Ibara and Senku, the Petrification Kingdom and the Kingdom of Science, came to a welcome end in this week’s Dr. STONE chapter 138. As I’ve made clear multiple times over the months, I’ve not been very impressed with the way that Riichiro Inagaki has been stretching out this conflict and essentially repeating the same battles over and over. That may have had something to do with the unusually truncated publication schedule – Boichi ended up getting sick in January – but now that Ibara has been felled and the petrification device secured, the series can hopefully move on to greener pastures.

Yet, before we move into the future, it’s worth dwelling a little bit on how Senku finally managed to get a leg up on his cunning foe. In the last chapter 137, his final bout with Ibara essentially boiled down to a tug of war over the device as it hung from the drone, piloted by Ryusui. But Senku was never going to win against Ibara in a battle of physical acumen, and it is only due to Ryusui’s quick thinking – diving through the petrification beam with the phone equipped, which allowed Senku to issue a petrification command remotely – that the Kingdom of Science managed to come out on top. If the importance of Ryusui as a secondary protagonist wasn’t already evident, then this should make it all the more clear.

Moving into the events of Dr. STONE chapter 138 proper, Senku and Chrome set about the task of gradually reviving everyone with their stores of revival fluid. While much of this is presented in a light-hearted fashion – they only revive Amaryllis because they don’t know where to forage for food, Charles only because they don’t know how to cook – there are some genuinely heartwarming moments in here. These include their decision to forgive Kirisame for being their former enemy, Ginro being reunited with Kinro after his heroic sacrifice, and – perhaps most importantly – Kohaku’s heartfelt hug with the usually cold and stoic Senku. It’s a sign of the trust and respect that they have built up for each other over the years and left me with a tear in my eye. 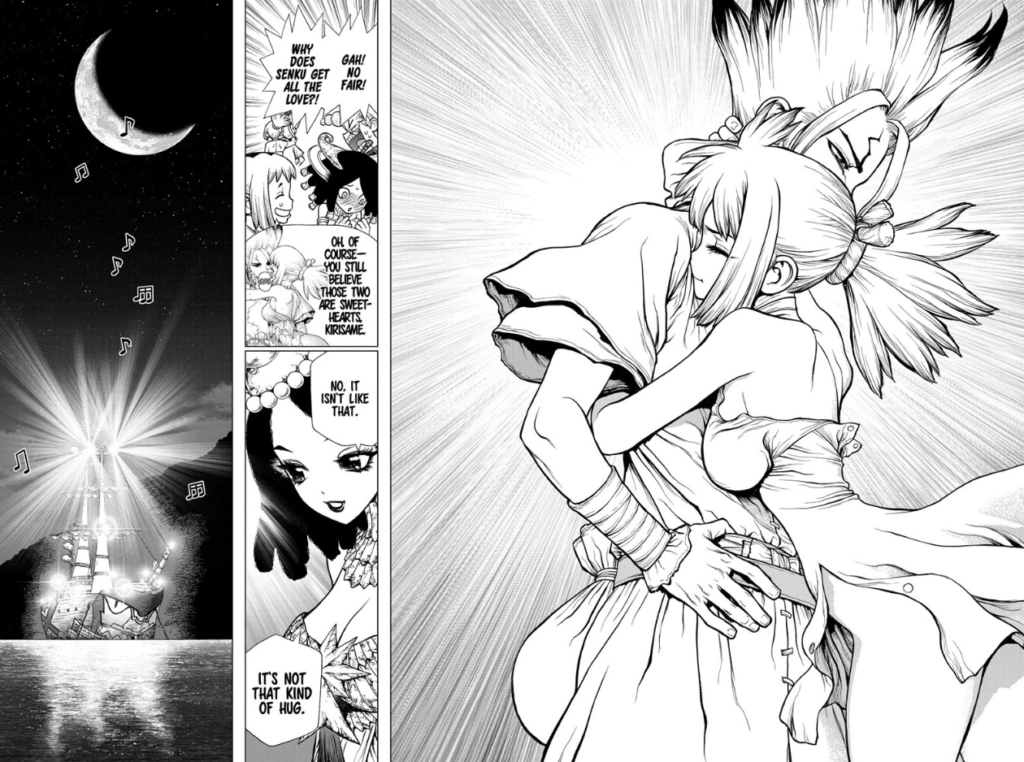 All of these heartfelt moments of reunion feel very much earned given the sacrifices made and risks taken by the Kingdom over the course of this past arc, but Dr. STONE chapter 138 isn’t all about picking up the pieces both figuratively and literally. Just as the crew of the Perseus manage to fix up the telecommunications device and get in contact with Ruri and the others who were left on the Japanese mainland, their conversation is cut short by another terrifying communication from the mysterious ‘Whyman,’ who sending them messages in Morse code when they initially set off on their seafaring journey. Only, this time, it’s delivering spoken commands to the petrification device to petrify the whole earth. The kicker? That voice is Senku’s. 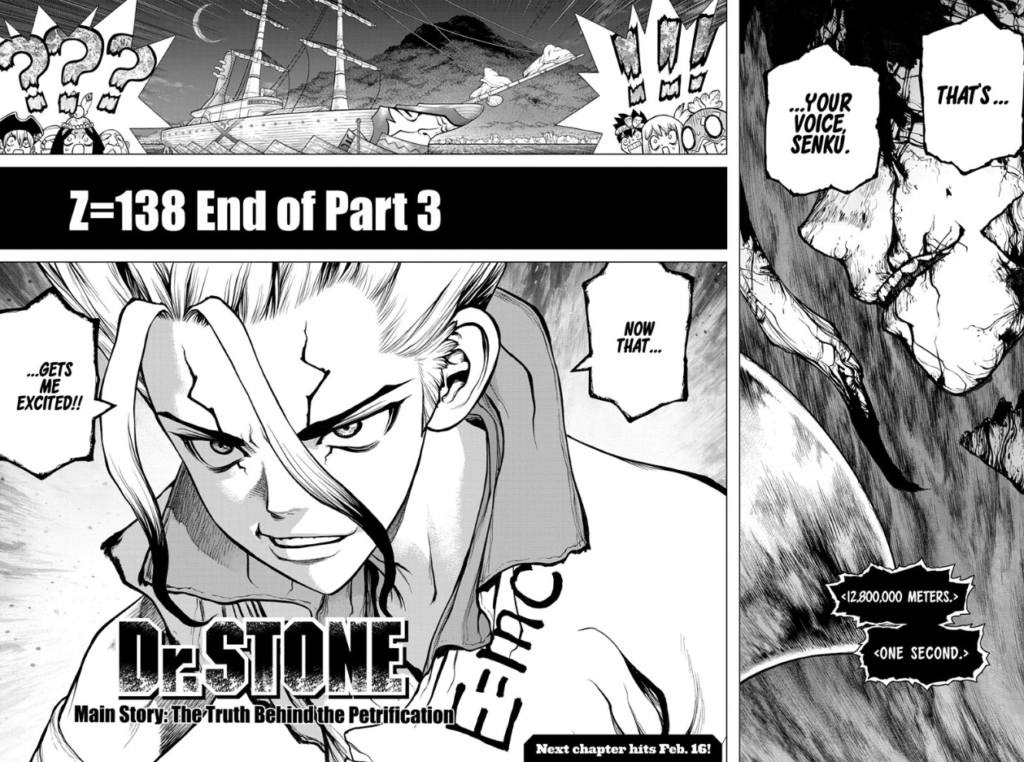 Dr. STONE has always had a habit of capping off its major narrative arcs in incredible and bombastic ways. I remember reading the end of the Village arc back in 2018 and literally shouting in excitement when I turned the page and saw the approach of the Empire of Might and the bold title ‘STONE WARS,’ but the end to part 3 and the beginning of part 4 has me particularly excited. We’ve inched another step closer to finding out what caused the inciting incident of the series in the first place, and seeing what kind of involvement Senku has with it is interesting to say the least. Time travel seems to be the most plausible theory, but I don’t feel nearly confident enough in my ability to second-guess Riichiro Inagaki to offer up my own thoughts just yet. For now, I’m quite content to set back and enjoy the ride.

In contrast to the important narrative developments that mark Dr. STONE chapter 138, Chainsaw Man chapter 57 is worth checking out for very different reasons. While it isn’t entirely devoid of narrative importance, what makes it unmissable is the fact that it may be the funniest chapter of the series yet.

Now that Denji is being targeted by assassins from across the globe, he’s being escorted about town by various members of the Public Safety Division, some of whom were introduced for the first time last week. It is while they are in town that they come across Kurose, Kobeni, and others, who ask to join the escort mission despite their injuries. Aki refuses, but Power becomes very interested in Kobeni’s car, which leads to some hilarious dialogue and an even more hilarious climax. 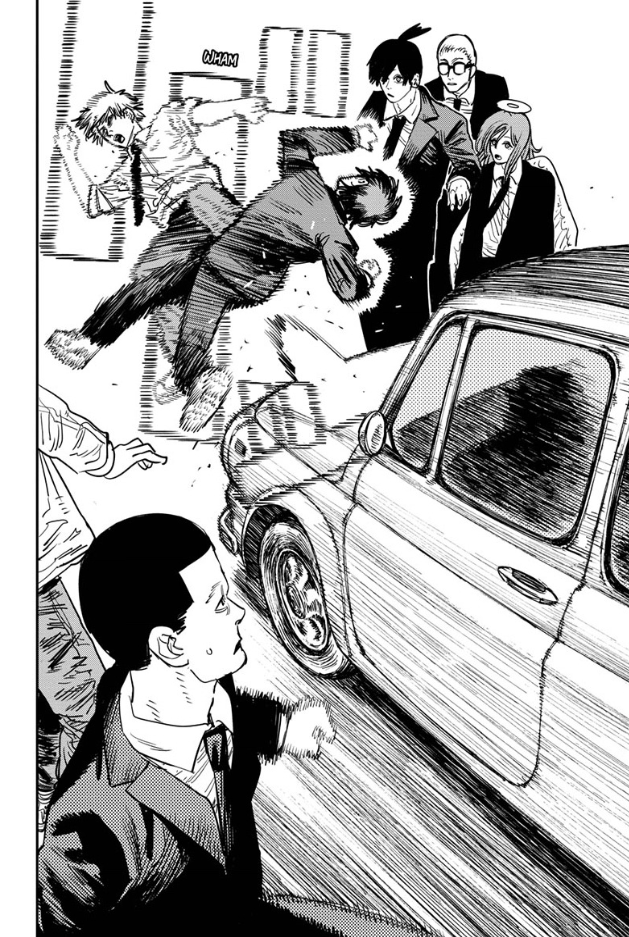 Power has always been an infectiously hilarious character, so it’s great to see her charms on full display in Chainsaw Man chapter 57 – doubly so when you consider that she was all but absent from the last arc.

But this chapter isn’t all about harmless (or perhaps harmful) comedy. It’s actually as a result of Power’s terrible driving that Kurose’s face changes into another, revealing that he was actually one of the Three Brothers assassins that were introduced back in chapter 53. This reveals, in turn, that their power is that of transfiguration thanks to a contract with a Skin Devil. The moment in the back alley with two of the remaining brothers also suggests that Yoshida, one of Denji’s protectors, might not be who he seems. 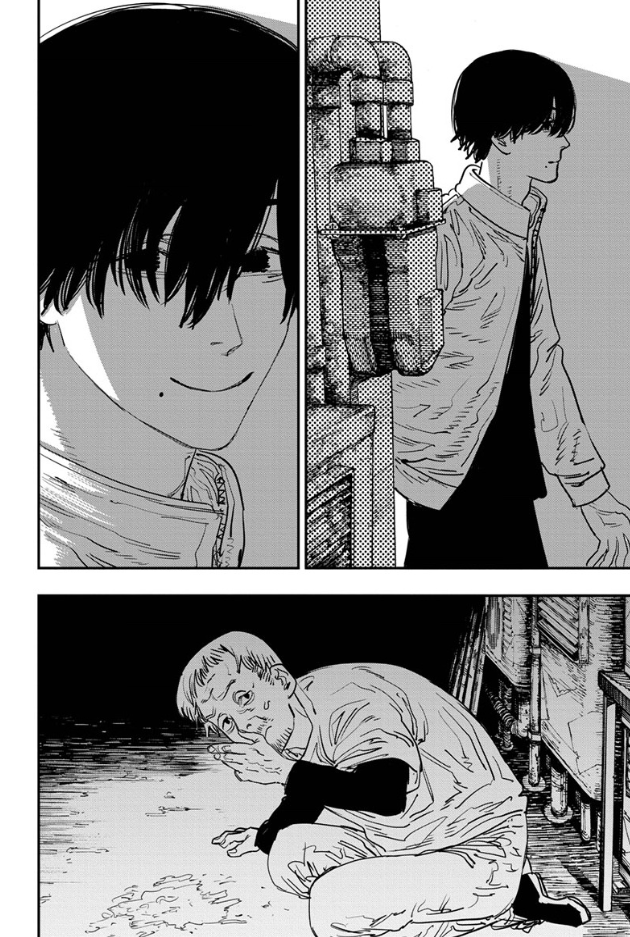 Safe to say, there’s plenty to unpack in Chainsaw Man chapter 57 and plenty of elements that may become important again in the future. But the reason that I featured this chapter this week over all of the others is that it actually made me laugh out loud while reading it, and that’s not something that often happens when I read manga. If you’ve yet to jump into the series’ latest ‘International Assassins’ arc, then this would be a perfect excuse to do so.

While Dr. STONE chapter 138 and Chainsaw Man chapter 57 are worth reading for their good points, what makes ZIPMAN chapter 9 one to look out for is how its bad points may or may not suggest the beginning of the end for the former Eiichiro Oda and Kohei Horikoshi assistant Yusuke Shiibata’s debut series.

ZIPMAN has been on a downward trajectory ever since its seemingly hopeful track of opening chapters, and this is mainly because of two things. Firstly, the fact that it doesn’t seem to stand out as a battle manga among the Weekly Shonen Jump line-up as a whole. It may have the tokusatsu/mecha battle gimmick, but that doesn’t make it exciting enough to recommend it over everything else of the same ilk. Secondly, its repetitive and, frankly, lazy narratives that constantly use the childhood friend character of Cheena as a damsel in distress for the schemes of various nefarious antagonists. Not only does this seem quite outdated, it doesn’t work nearly as well as Yuusuke Shiibata might think: at this moment in time, we’re not nearly invested enough in the characters of Cheena, Kaname or Koshiro to really care what might happen to them at the hands of a villain. The result is a series that seems to be heading straight for the dustbin of history.

Further, several aspects to the narrative of ZIPMAN chapter 9 seems to suggest that an ending might be closer than first thought. Aside from the fact that it is at the very bottom of this week’s table of contents – signaling either editorial discontent or poor performance in the reader surveys, or perhaps both – the fact that Koshiro and Kaname storm straight through this week’s battle and to the final boss speaks volumes. While previous have at least taken the time to explore how our protagonists prevailed, this week feels like a whole chunk is missing. Even the characters can’t help but comment on it!

It’s not exactly a bad idea to power through the rest of this arc in search of greener pastures. Clearly, the idea of having a towerful of bad guys for our heroes to defeat with Cheena at the top isn’t proving as compelling as Shiibata might’ve thought, so you can’t exactly blame him for wanting to change things up. But is this change too little, too late? Only time will tell.

Finally, we come to Mitama Security chapter 23. Unlike my discussion of the previous chapters, however, I don’t have all that much to say beyond the fact that Rena Haze looks great in a ponytail, and how we should respect that. 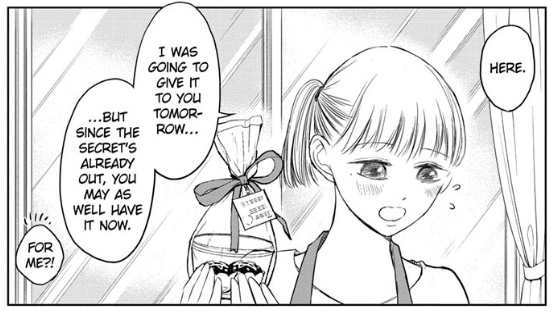 But I suppose, while I’m here, I might as well offer some analysis. Mitama Security chapter 23 is far from the best chapter of the series, but it’s a welcome change of pace from the frantic baseball antics of previous weeks. It also serves up an interesting mystery all wrapped up in a bow and complete with a sweet, hazelnut center. That’s a very roundabout way of saying that this chapter is Valentines’ Day-themed, with Rena trying to hide from Joh the fact that she is making chocolate for him, as per the Japanese tradition.

Some eyebrows may be raised at the fact that a grown man is receiving chocolate from a high school girl, but the nature of Rena’s affection is more along the lines of a teenage crush than genuine attraction. We should also note the widespread phenomenon of giri choco (lit. ‘obligation chocolate), where women feel like they have to give some kind of chocolate to men they feel no genuine attachment to. She also may or may not have been pushed into the process by Yuko, who does seem to genuinely love Joh, so put down your pitchforks already.

While we’re on the theme of love, it is interesting to note that just as Valentines’ Day is around the corner, so too is the end of We Never Learn. It must be said that I never got into the series because I tend to avoid harem series like the plague – the best girl never wins – but the slice-of-life series’ departure will leave a big love comedy-sized gap in the Weekly Shonen Jump line-up. Based on Mitama Security chapter 23, could Tsurun Hatomune’s series fill that gap? I doubt it, but it’d be interesting to see it try.