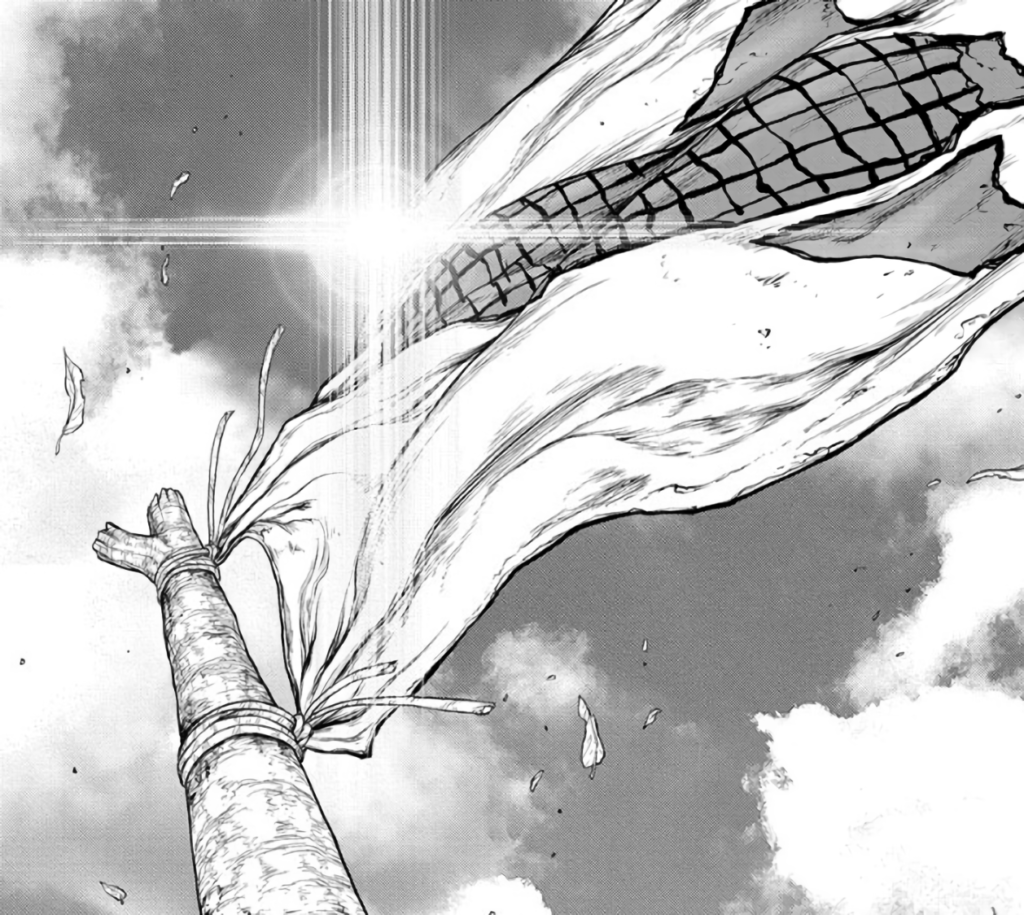 The beginning of a new week can only mean one thing: time for new Weekly Shonen Jump! Shueisha’s legendary manga magazine has been releasing every week for over 50 years at this point, and it still has enough exciting series in its roster to justify its hallowed status. Plus, with VIZ Media now publishing the entire thing in English, there’s never been a better time to jump in. In this column, Jacob investigates the latest and greatest in the world of Weekly Shonen Jump, telling you what’s worth your time and what’s not. This week, we’re chatting Dr. STONE chapter 168, The Promised Neverland chapter 181.1, and Moriking chapter 22.

There’s bonus chapters galore in this week’s Weekly Shonen Jump! We’ll be covering one of them here, but the other is available via VIZ Media. If you’re a fan of Demon Slayer: Kimetsu no Yaiba, then don’t forget to check it out. In other news, have you seen episode 1 of Jujutsu Kaisen yet? Fans of this column will no doubt appreciate it, as it makes a load of smart choices that circumvent some of the weaknesses of the original manga. Oh, and it has probably the best OP of the year – I’ve seriously had Kaikai Kitan by Eve on loop all day. It’s that good. Anyway, on with the manga.

A flag is being raised in Dr. STONE chapter 168. What kind of flag is this, you may ask? Both a metaphorical and a literal one. This week’s chapter marks an entirely new beginning for Riichiro Inagaki and Boichi’s science series, and I’m all here for it.

Last week, we caught up with Dr. STONE just as Taiju and co. succeeded in digging a tunnel to Dr. Xeno’s base and taking it over. But, at the very same time, the Kingdom’s own base of operations was being taken over – tricked by a helmeted combatant, Ryusui and Senku went off to engage who they thought was Stanley, but was actually someone completely different. This left the Perseus wide open for a surprise attack – “a most elegant checkmate”.

Obviously, this poses a problem for Senku et al. in Dr. STONE chapter 168. Despite achieving their goals and capturing the king, their friends are surrounded and at the mercy of Xeno’s men – whatever are they to do? 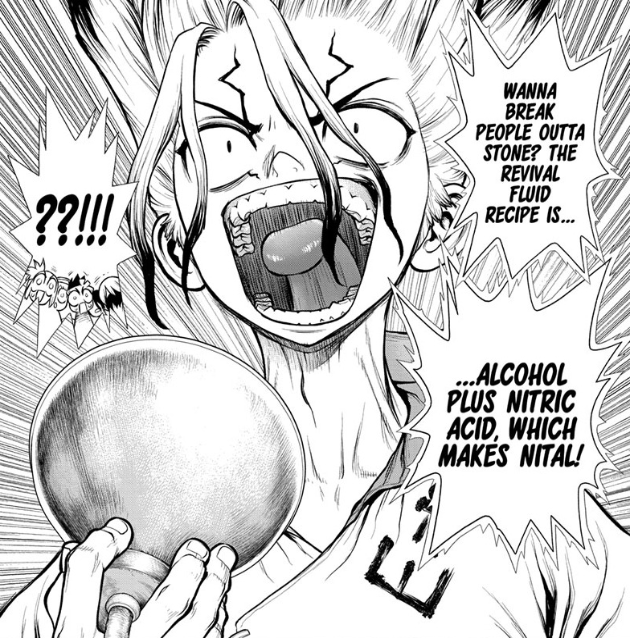 The answer, as it turns out, is to do the unexpected. First, Senku attempts to resolve the situation through diplomacy – “the new world’s first and last leadership summit between Japan and the U.S.” – but this doesn’t go too well. Brody quite rightly points out they are in no position to negotiate, but that was never Senku’s aim from the beginning: instead, he blurts out the recipe for the revival fluid and banks on Brody’s inherent desire to bring back those around him.

Whether or not that works in the long term remains to be seen. The recipe for the revival fluid was one of the only advantages that the Kingdom of Science had over Xeno’s empire, and it stands to reason that it would make them question their loyalty. What’s more, they won’t have much of a reason to stay loyal, as Senku is taking their leader and running. 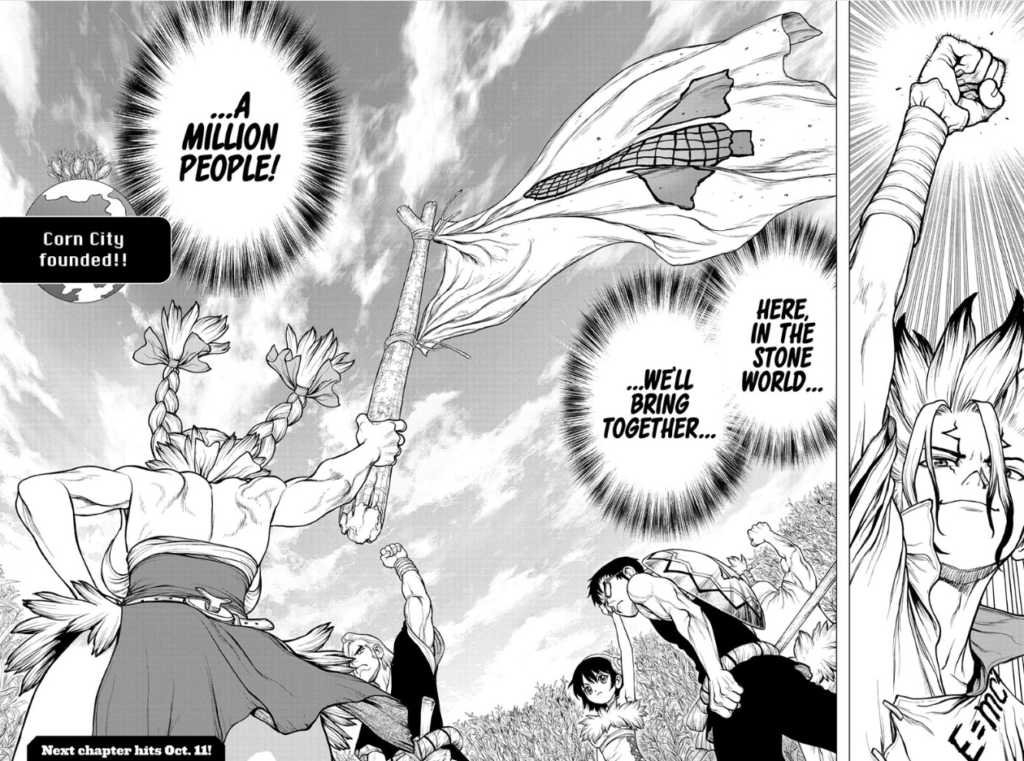 Out of all of the crazy things that Senku has done up until this point, this might be the craziest. Not only is he relying on his comrades to carry out his work for him, he is also taking his chances on evading Stanley – as Brody says, “He’ll track all of you and Xeno down to the very ends of the earth.”

Even so, it just might work. Judging from the end of Dr. STONE chapter 168, Nikki, Ginro, Yuzuriha and Magma have been allowed enough freedom to plant a whole field of corn, and Brody seems taken aback enough to show that the recipe has had its desired effect. A further flag was also planted earlier in the chapter, when Senku and Xeno met for the first time.

At various moments throughout this arc, we have had the opportunity to see what makes Dr. Xeno tick. Whether it be his back story in chapter 156 or his conversation with Taiju in chapter 167, what we have found is a deeply pessimistic man who has somehow been wronged by the world, angry and afraid of it. 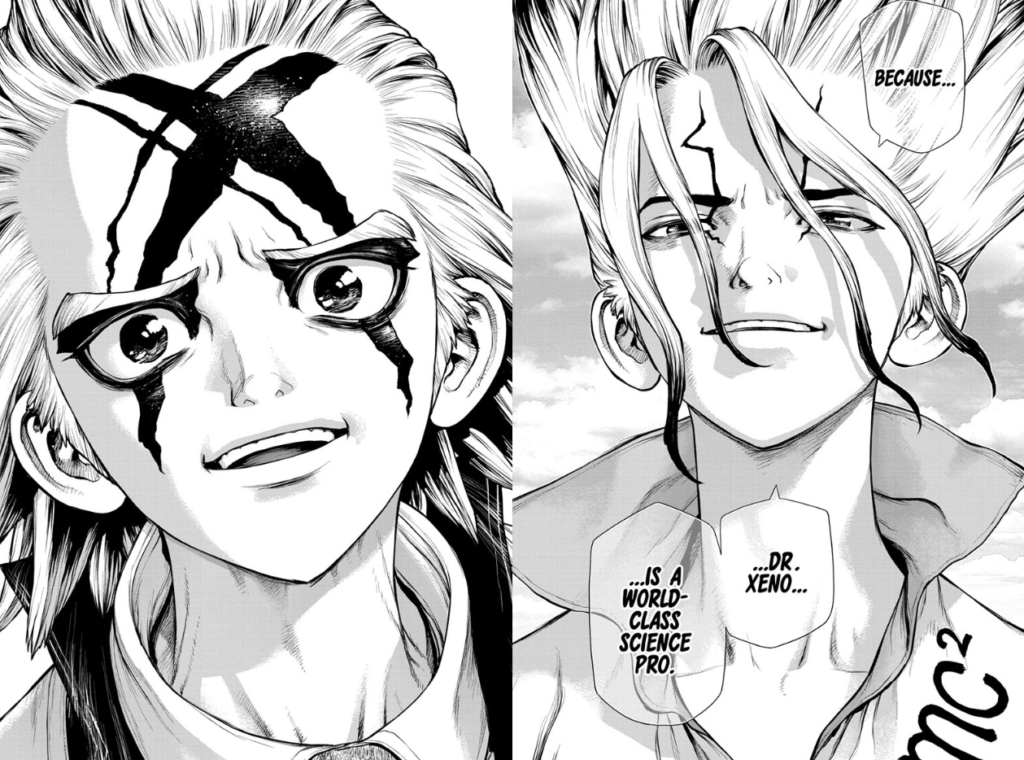 Just by an exchange of looks in Dr. STONE chapter 168, Boichi seems to suggest that there might still be hope. Contained within the eyes of both men – nay, scientists – is mutual respect, adoration, and appreciation. For Senku, it is the first time that he has met the man who gave him so much. For Xeno, it must feel like seeing the student he mentored all grown up. Indeed, this meeting is full of significance, and honestly nearly brought a tear to my eye.

Whether or not Xeno has a change of heart remains to be seen. Certainly, he would benefit from being around someone like Senku, who has struggled against the hardships of the world and still believes in the potential of humanity. And if he does, that would certainly put an end to the protagonist’s pursuit by Stanley – if Xeno no longer views Senku as an enemy, then there is no reason for him to be freed.

In any case, what Dr. STONE chapter 168 establishes is a brand new equilibrium. With Stanley on the hunt, Senku will now have to believe in his friends and hope that they can establish the Corn City in his absence – all the while evading capture. What happens from here on out will be fascinating to see, and I can’t wait to read it.

Truth be told, I went into this special Promised Neverland oneshot with very low expectations. I’ve been burnt by the series before, and the ending was bad enough that, even now, a foul taste still lingers in my mouth. Still, I’d be remiss not to check this – chapter 181.1, according to VIZ Media’s website – out.

What I found was surprisingly good. Perhaps it says something about the future trajectory of the series that returning to the setting and location of Grace Field House would produce such good results, but no matter. The Promised Neverland chapter 181.1 follows the story of Ray before he teamed up with Emma and Norman, documenting his torment as well as how he came to uncover the truth. 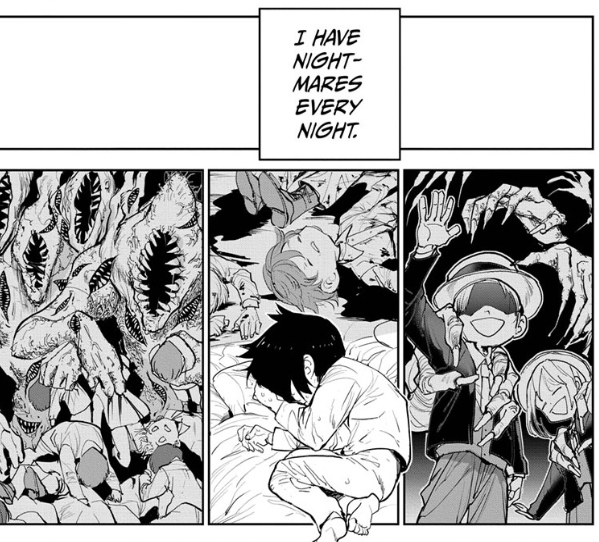 Well, The Promised Neverland chapter 181.1 only sort of does that last part. To be honest, those who have been reading the series from the beginning may struggle to remember when and how Ray found out about the demons, but no matter. This one shot probably doesn’t spend too much time recapping things as it has only nineteen pages, limiting what Kaiu Shirai and Posuka Demizu could do in the time allotted.

In cases like these, the wiki comes in handy. According to Ray’s entry, he was born to Isabella through artificial insemination and thus does not suffer from childhood amnesia. That would have been the bare minimum of information that The Promised Neverland chapter 181.1 needed to show in order to ensure that all readers were up to speed, but oh well. Enough nitpicking. 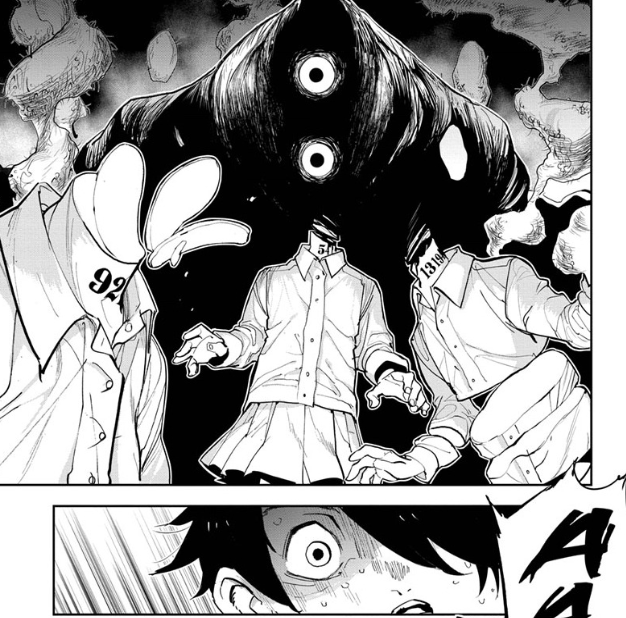 The Promised Neverland chapter 181.1 is actually pretty good as it fulfills two functions. Firstly, we get a taste of how tormented Ray was due to his knowledge of the truth – watching his fellow orphans get handed over to the demons, he couldn’t help but shut himself off. As a result, this also explains why he was always so engrossed in books – he was always plotting his escape and how to evade Isabella. This would come in handy, many years later, after he teamed up with Emma and Norman.

Secondly, The Promised Neverland chapter 181.1 fills in some important blanks. For one, we get to see Emma and Norman as a child, showing us how trusting they were of Isabella and how ignorant they were to the truth. That might sound obvious now, but hasn’t been a fact for many years in the original manga. Furthermore, we get to see such pivotal moments as when Ray confronted Isabella – while it’s no different from how Ray recounted it later on, it is cool to see it happen sort of ‘in the moment.’

Coming in at nineteen pages, this Promised Neverland bonus chapter was never going to be the most substantial installment. But if it can cram so many effective moments in, then I may have a little more hope for the upcoming “epilogue” chapter – Kaiu Shirai and Posuka Demizu may not be able to take away my disappointment, but they might be able to alleviate it somewhat.

Finally, we come to Moriking chapter 22. As it turns out, this might be the last time we get to talk about it – if the series’ sales figures weren’t already indication enough, then several things said throughout this chapter should make it clear that Tomohiro Hasegawa’s series is coming to an end sooner rather than later. That’s a shame, as I was quite enjoying it.

The first hint (or should I just say statement?) that Moriking is going to end soon comes in chapter 22 when the series’ next antagonist appears. Up until this point, the series has been operating on a system whereby each new foe drives forward the shenanigans of the next few chapters, which is fine. We saw that back when Oka was first introduced, as well as Meo and Oki later on. 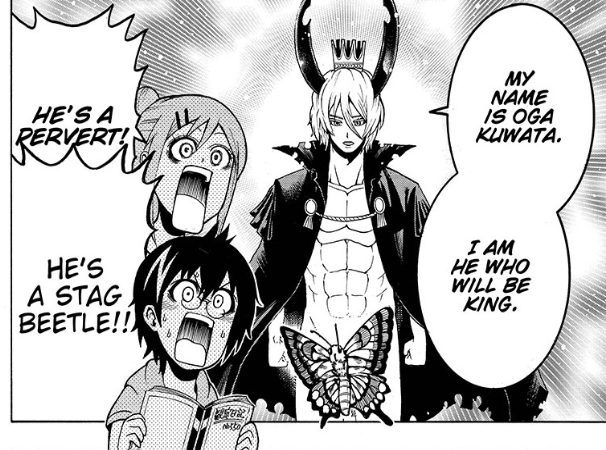 From the get-go, it is clear that Oga is a pretty endgame villain. Not only is he the leader of the ‘Legion’ organization that has been mentioned multiple times in the past couple of weeks, he is also the first villain who has been able to match Moriking in terms of raw strength. That makes sense given that he is a stag beetle, but is nevertheless symbolically quite significant.

Aside from the fact that the narrator describes Oga as “The final candidate for king” at the very end, what also makes this fact clear is the kind of tropes that Moriking chapter 22 invokes. When the rhinoceros battle tries (unsuccessfully) to take him on and win, Oga makes a Star Wars reference by saying “Join me, Moriking” and “Let us rule this planet together!”. This clearly casts the stag beetle as the protagonist’s foil, as the two characters see eye to eye. 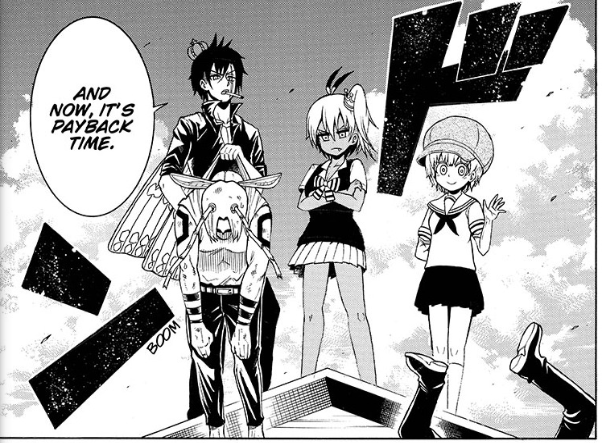 Another trope that Moriking chapter 22 invokes is the classic shonen “yesterday’s enemy is tomorrow’s friend.” To a certain extent, this has already been happening, as each one of Moriking’s defeated opponents joins the series’ cast of crazy characters, but no matter. Seeing all of Oka, Oki, and Meo gathered together and vowing to fight for Moriking is quite nice, and gives a real sense of narrative progression to the story. Only time will tell if their combined powers will be enough, though.

This sense of narrative progression, as well as the subtle touches with Oga’s being a stag beetle, is what I really love about this series. No other gag manga this year has been able to come across as well-written as Moriking, moving through different scenarios and different arcs with relative ease. The way that Hasegawa also skillfully uses the insect setting – of course a stag beetle would be the only insect able to match Moriking in terms of strength! – is also something that I’ve always appreciated.

It’s just a shame that no one else does.

You can read Dr. STONE chapter 168, The Promised Neverland chapter 181.1, and Moriking chapter 22 for free via VIZ Media’s Shonen Jump.