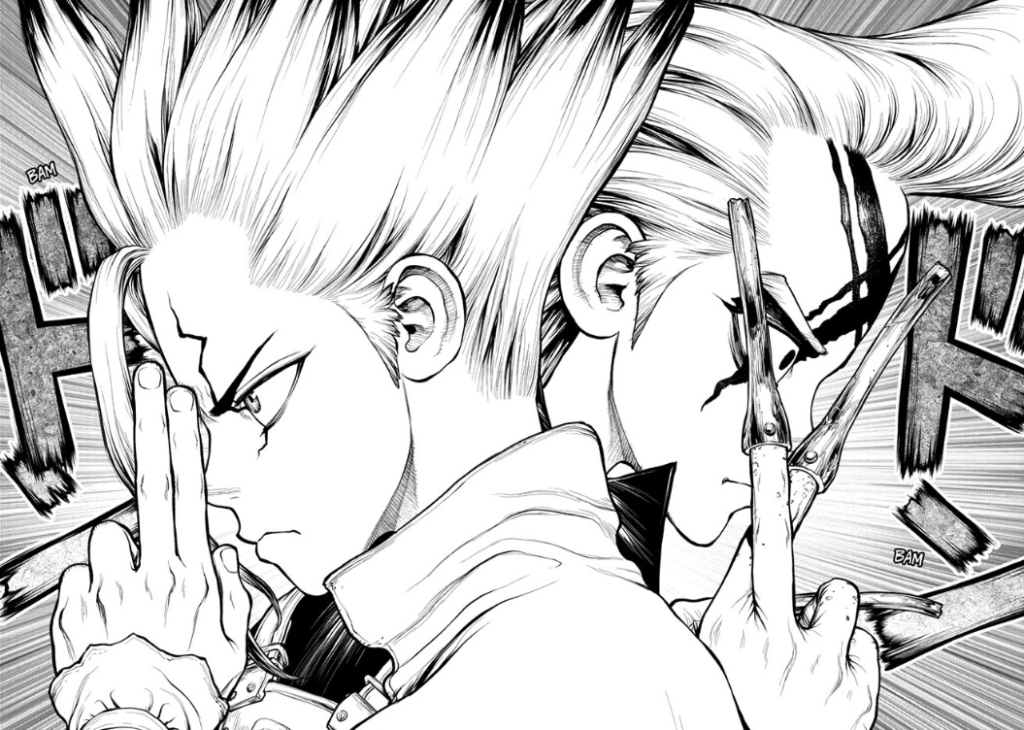 The beginning of a new week can only mean one thing: time for new Weekly Shonen Jump! Shueisha’s legendary manga magazine has been releasing every week for over 50 years at this point, and it still has enough exciting series in its roster to justify its hallowed status. Plus, with VIZ Media now publishing the entire thing in English, there’s never been a better time to jump in. In this column, Jacob investigates the latest and greatest in the world of Weekly Shonen Jump, telling you what’s worth your time and what’s not. This week, we’re chatting Dr. STONE chapter 171, High School Family chapters 9 and 10, and Chainsaw Man chapter 90.

Anyone else feel like this week’s chapters were a little bit meh? It might just be the shorter days setting in (shoutout to seasonal depression), but it was honestly hard to pick three for this week – I’m really starting to feel the absence of My Hero Academia. Still, there is some fun to be had, and I do think that the three here constitute the best of the best. In other news, have you checked out our features for this month? I haven’t mentioned it yet, but I wrote a long piece on the importance and influence of Weekly Shonen Jump, which readers of this column may enjoy. Anyway, on with the manga.

Dr. STONE chapter 171 has been a long time coming. Ever since I realized that the conflict between Senku and Xeno was just as philosophical as it was personal, I’ve been waiting for them to cross paths and talk it out – this week’s chapter is about just that.

Now that the separated Kingdom of Science is well and truly on their way to South America (with Stanley in hot pursuit), it’s time for Senku and Xeno to sit down and figure things out. Namely: the petrification beam – where it came from, and how to get there. 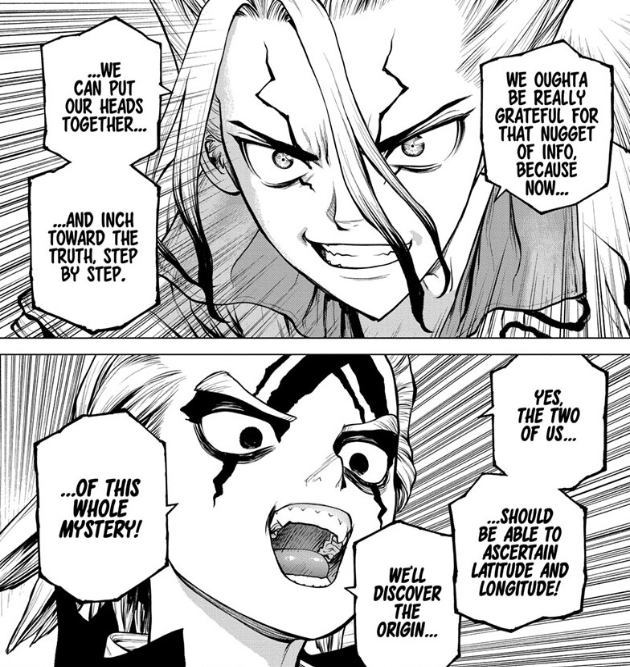 Dr. STONE chapter 171’s meeting of the minds reveals several things. Unfortunately, it does not settle the philosophical divide that separates Senku and Xeno (that will undoubtedly be tackled later) but it does do its level best to make it appear as if Xeno’s inclusion has been planned from the beginning – even if previous chapters have me convinced of the opposite.

As the narration says, the task of triangulating the origin of the petrification beam was “a problem that neither could on his own.” Triangulation, by definition, requires two points of reference that the sole observers of Senku and Xeno did not have up until this point – their meeting was quite literally required to advance the story, although other methods undoubtedly existed.

Most of Dr. STONE chapter 171 is all about how Xeno and Senku put their minds together to solve the problem of the petrification beam, but it’s not exactly clear why. Xeno disagrees with Senku in a fundamental way – he has a negative view of humanity while Senku has a positive one – and Senku’s ultimate aim in obtaining the petrification device is to make sure that it never happens again. Xeno, meanwhile, has never had a problem with petrified humans and would even prefer it if it meant keeping the multitude out of the way.

Even so, you can hardly expect Dr. STONE chapter 171 to solve every single problem, and I have enough confidence in Riichiro Inagaki’s writing to expect that resolution will come sometime in the future. In the meantime, however, Senku and Xeno are working together to solve the problem – and in very bizarre ways. 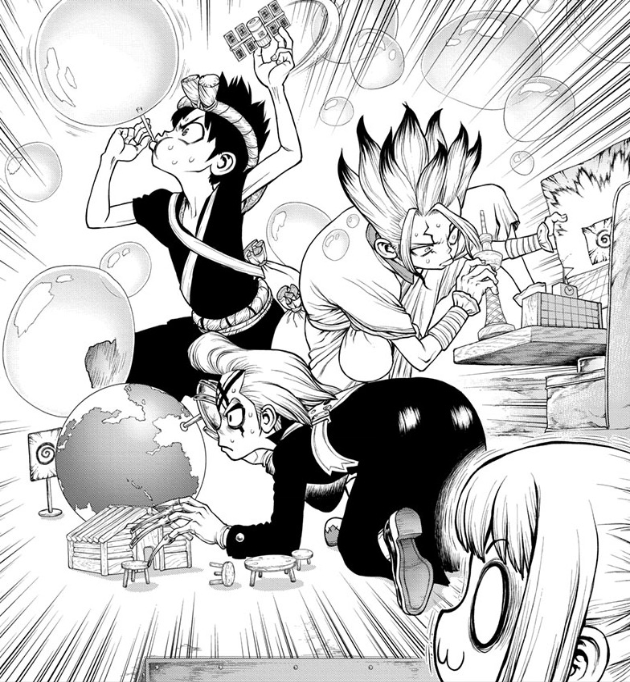 The addition of humor to Dr. STONE chapter 171, in the form of the above repeated gag, is an excellent idea as it keeps things from being too dry and exposition-heavy. Chrome, too, is introduced as an outside observer to further this humor and serve as the POV character in the way that he always has – yet, he does make an important contribution.

Observing that Xeno is preoccupied with “the form of things” while Senku is practical to a fault, this gives one idea of a potential fault line that could split the two foes apart in the future. Furthermore, Xeno’s own description of Byakuya as a man who “embodied both sentiment and rationality” gives a sense of the balance that is needed between both points of view – there comes a time for practicality, as well as form. Perhaps that is the synthesis, conversely, that Senku and Xeno will lead to in the future.

In any case, Dr. STONE chapter 171 leaves off with a clear indication of where the petrification beam came from, setting up strongly for the next narrative arc. Considering that the last one was nothing short of excellent, I have high hopes for the series’ future – I just hope that Inagaki can stick the landing on the philosophical debate.

High School Family has, for many weeks, come dangerously close to being included. Upon its debut, Ryo Nakama’s latest series didn’t impress me, but it has shown its true colors in recent weeks: demonstrating that it is not just a wacky gag manga, but also one that deals explicitly with the joys and frustrations of family life.

Clearly, such an approach is working, as it received two chapters this week. It is true that this could be to make up for the absence of My Hero Academia, but that isn’t something that Shueisha has done regularly in the past. It also can’t be a coincidence that, just as High School Family chapters 9 and 10 hit, the publisher launched a special project to “thank readers for its popularity” – something appears to be working in its favor.

That project is actually relevant to High School Family chapters 9 and 10 as it cements one of the series’ current strengths: relatability. In past chapters, Nakama has explored the realities of being an awkward teenager and being ashamed of your family, but this week’s chapters present a different perspective. 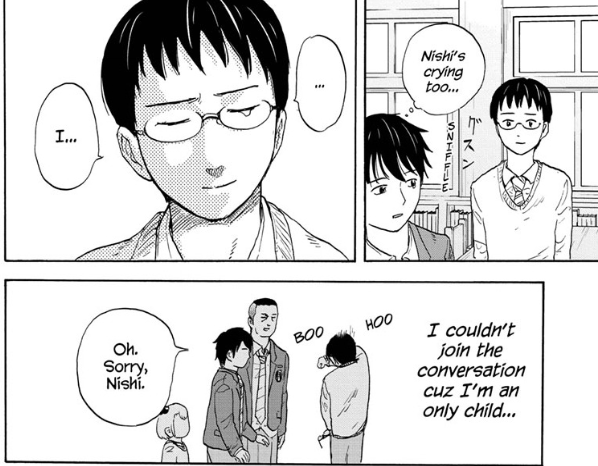 In High School Family chapter 9, Haruka is jealous of her big brother Koutarou getting to be a school librarian, so she harasses him. As someone with younger siblings myself, I know this feeling all too well. Yet, only children need not feel excluded: one of chapter 9’s key punchlines at the very end is the fact that Nishi can’t join in the conversation.

This relatability continues into High School Family chapter 10, as Koutarou’s dad Ichirou smashes head first into a brick wall: math. While it’s certainly been a while since I last had to deal with quadratic equations, I do remember them being quite hard, and Ichirou’s own reaction reminds me of how my dad used to complain that I’d “surpassed” him when I was young. You do tend to forget things like this, after a while. 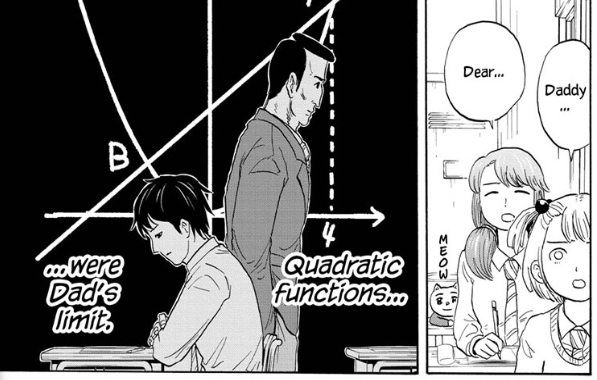 Haruka starts out the chapter by acting bratty, jealous of her big brother as all younger siblings are. Yet, it is by talking to Hanazawa (Mr. Mule) that she realizes her own conceitedness, capping off the story in a wholesome way. 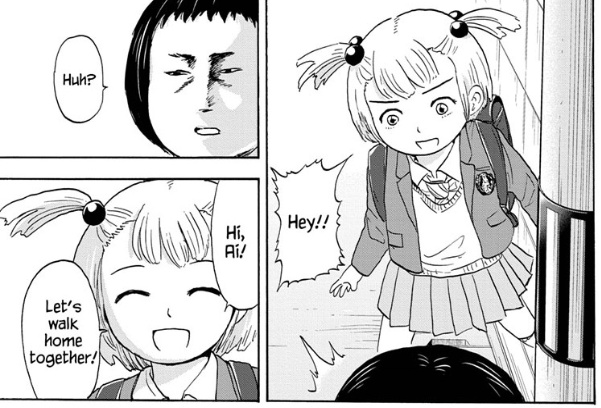 I’d like to say the same thing about High School Family chapter 10, but that chapter doesn’t really have a satisfying conclusion. Furthermore, I will admit that this series really isn’t that deep – looking at the reactions on social media, it seems as if most English-speaking fans aren’t really on board.

To give my two cents, however, I’d say that High School Family is much more deserving of serialization than something like Me & Roboco or even Agravity Boys. While Me & Roboco really rubbed me the wrong way this week with its insensitive overwork jokes, Agravity Boys seems to have locked itself into an arc that isn’t really delivering the goods. And it has had plenty of time to prove itself, unlike Me & Roboco.

High School Family chapters 9 and 10 are just two examples of the way that I am unexpectedly enjoying this series, regardless of my initial frustration. If anything, it just provides me with a little bit of familial warmth that is sorely lacking in these times of COVID-19 – call it self-serving, call it what you will, but I think that this series is pretty good.

One chapter that does not require any justification for its inclusion, however, is undoubtedly Chainsaw Man chapter 90. Once again, I am forced to break my rule of not including too many chapters from one series because of developments in Tatsuki Fujimoto’s series, unpredictable as they are. This time, it concerns one character: Power.

That’s right – Power is back! After being brutally killed by Makima back in chapter 81, it was always up in the air whether her death would be permanent or not. The partial resurrection of several beloved characters in chapter 86 gave some indication that Fujimoto was prepared to backtrack, but Chainsaw Man chapter 90 takes the biscuit. Not only is Power alive, she’s as lively as ever. 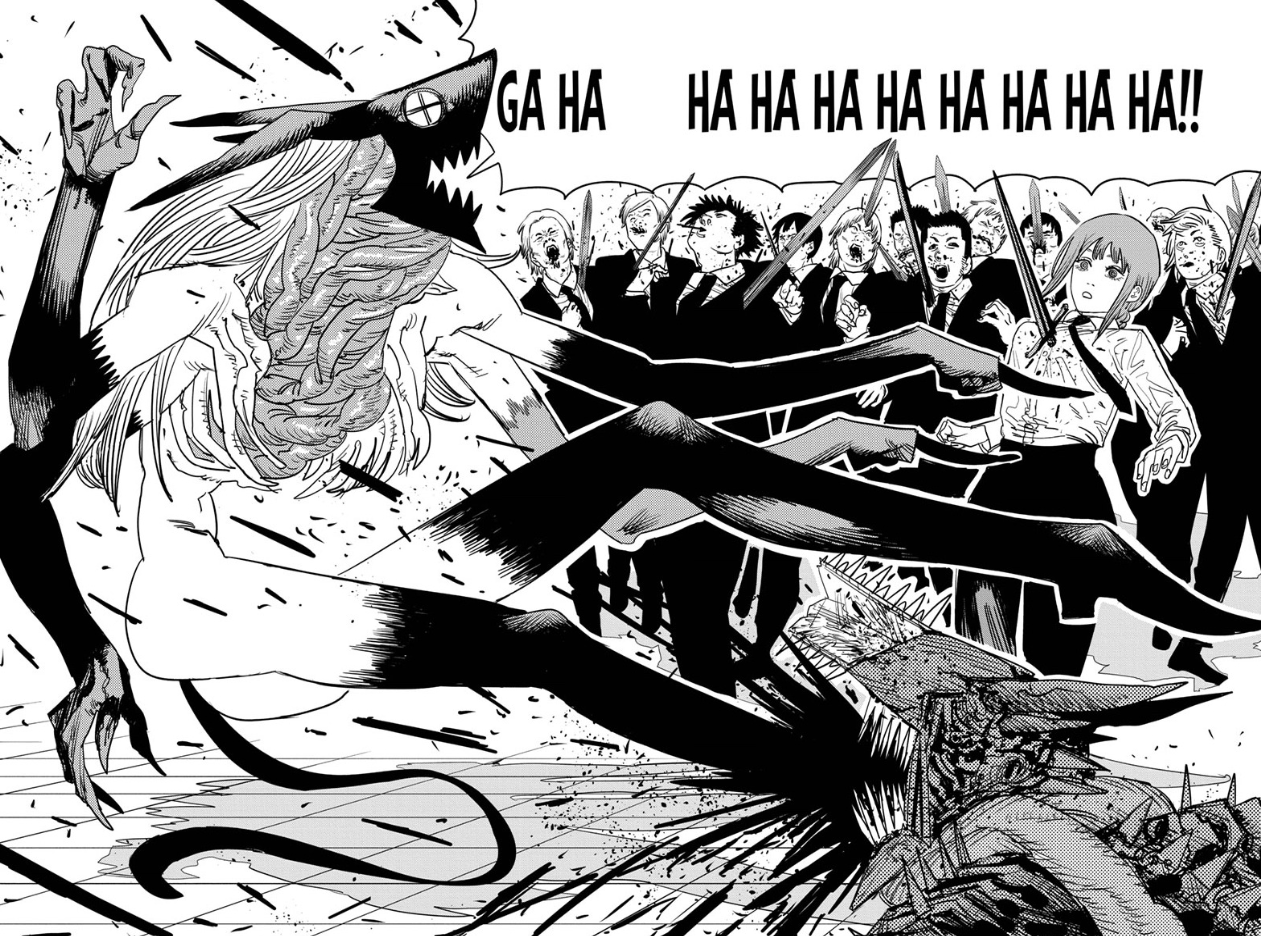 Fans were certainly enthused by this development, as the phrase ‘Power-chan’ started trending on Twitter shortly after Chainsaw Man chapter 90 was released on Sunday evening.

To be clear, it’s not as if Fujimoto doesn’t provide an explanation for this development: speaking to Power, Pochita says that her current form is as a result of the blood that she made Denji drink before, back in chapter 71. At the time, that scene appeared to be just a culmination of the sexual energy that permeated the entire proceedings, but we can see now that it was clearly a setup – as they say, hindsight is 20/20.

Nevertheless, Chainsaw Man chapter 90 does set a dangerous precedent. If a character such as Power can be brought back from the dead, then what’s to stop Fujimoto from doing the same for Aki, or even Himeno? That isn’t to say that this particular instance wasn’t well justified, once again, but that it is a slippery slope.

In any case, one other thing that Chainsaw Man chapter 90 clarifies is the nature of the titular character. Previous chapters have suggested that it was not Denji himself in control of his Devil form, such as when he vaguely remembered that he wanted to eat a good hamburger in chapter 85. My guess was that Pochita was in control, interpreting Denji’s will and desires as and when they floated up to the surface. 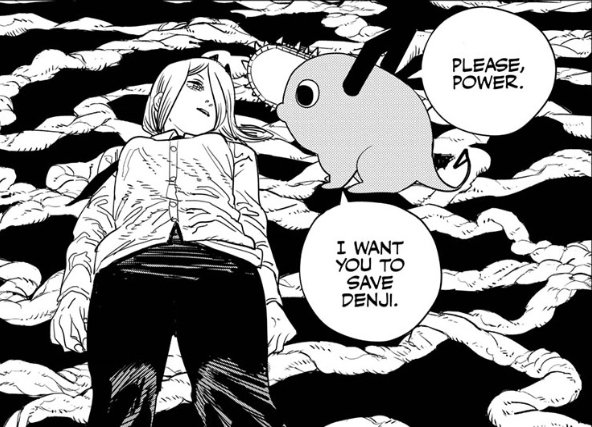 Yet, Pochita and Power’s conversation at the beginning of Chainsaw Man chapter 90 seems to suggest that Pochita isn’t in control, as he asks Power to “save Denji.” Surely, if he was, he would just do it himself? Surely.

What more is there to say about Chainsaw Man chapter 90? I’m certainly glad that Power is back, but also equally worried about the future course of the story. In this sense, I suppose nothing has changed. Tatsuki Fujimoto will keep us all guessing up until the very end.