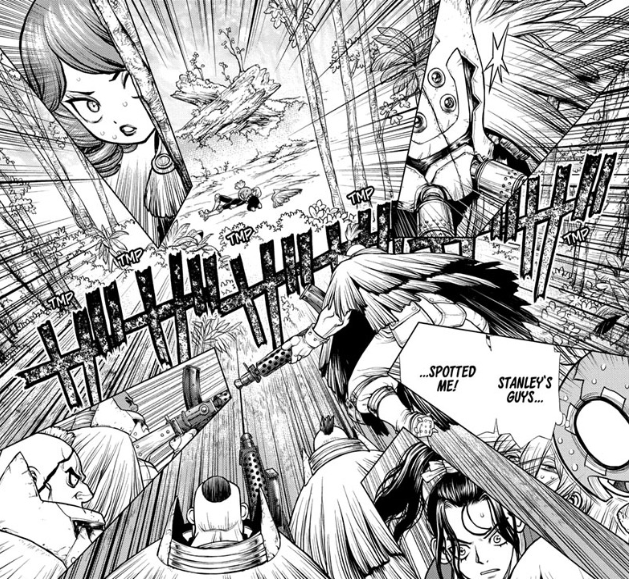 The beginning of a new week can only mean one thing: time for new Weekly Shonen Jump! This is where Jacob investigates the latest and greatest in the magazine, telling you what’s worth your time and what’s not. You can find coverage of other series under the tag Jump Time. Here’s Dr. STONE chapter 186.

Barely minutes into the final showdown between Stanley and Senku at Fort Medusa in Dr. STONE chapter 186, and there’s a big problem: Suika has been spotted by the American troops. Unable to stop herself from administering antivenom to an enemy combatant after being bitten by a spider that she (inadvertently) turned her way, Francois is forced to make a split-second decision that reveals the strength of Riichiro Inagaki’s writing and his synergy with artist Boichi in every single way.

You’d be forgiven for thinking that Dr. STONE is a series about science and technological advancement (that’s what it says on the tin, after all) but this recent arc has also revealed that Inagaki has a strong grasp on human psychology and military tactics. Paired with the climax of the Treasure Island arc, this shows that Dr. STONE is a series that relies just as much on quality writing as it does real world science, informed as ever by consultant Kurare.

What is it that makes Dr. STONE chapter 186 so great? Well, Francois first has to figure out how to use the very small paring knife that they brought with them in the most effective way. After about 10 milliseconds of thought, Francois throws it towards Ginro and Matsukaze, who are being transported as prisoners of war as part of Stanley’s troop. Matsukaze isn’t able to cut his own bindings after catching the knife, however, so it’s up to the cowardly Ginro to prove his worth and distract Stanley’s soldiers for as long as he can. 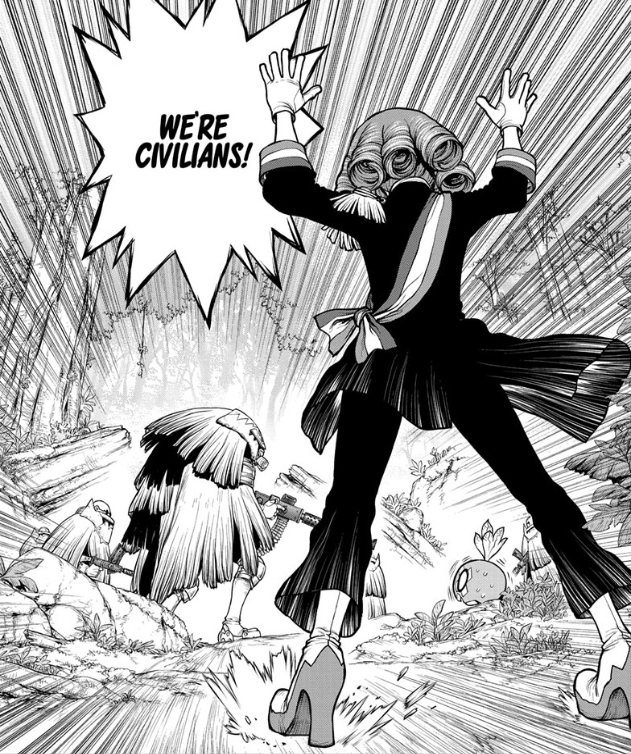 Although he hesitates for a second, Ginro does manage to pluck up the courage and charge towards Stanley with a big stick. He quickly gets gunned down, of course, but this gives Francois the information they need to determine that Stanley’s troops won’t harm them if they declare that they’re civilians: they’re not ‘cold-blooded murders,’ after all, but ‘soldiers.’ They follow the Geneva Convention and the rules of war.

The sheer amount of information that is conveyed in such a small space of time and the way that the situation changes so much over the course of two-dozen pages really is a testament to how fantastic Riichiro Inagaki is as a writer, but artist Boichi also has more than a few moments to shine in Dr. STONE chapter 186. In fact, he goes way too hard showing the simultaneity of Ginro’s thought process across pages eight and nine and the shot of Stanley saying that he ‘won’t shoot ya’ is honestly breathtaking. Let no one say that he doesn’t keep up his side of the bargain.

Of course, if you’re up to date enough to be reading Dr. STONE chapter 186 on the week that it comes out, then you probably don’t need any convincing that this series is good. But it really is, isn’t it? Sometimes that even surprises someone like me, who has hitched his wagon to it from the very beginning.

You can read Dr. STONE chapter 186 for free via VIZ Media.