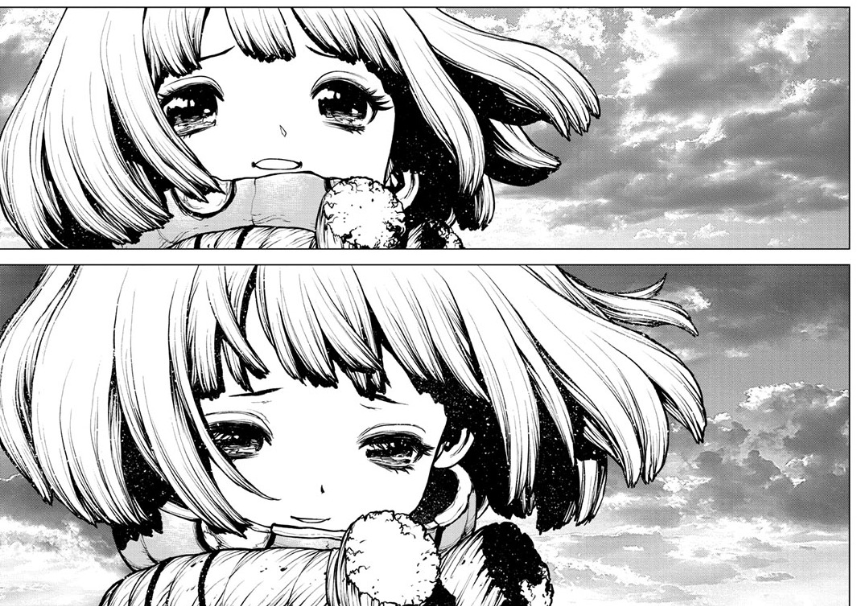 The beginning of a new week can only mean one thing: time for new Weekly Shonen Jump! This is where Jacob investigates the latest and greatest in the magazine, telling you what’s worth your time and what’s not. You can find coverage of other series under the tag Jump Time. Here’s Dr. STONE chapter 195.

Recent chapters of Dr. STONE have been downright phenomenal, and chapter 195 is no exception.

In this latest arc, series artist Boichi appears to be applying everything he learned about action of scale from the spinoff Dr. STONE reboot: Byakuya, while series author Riichiro Inagaki is going against everything we might expect from the story. And now, his latest masterstroke is giving one particular character the spotlight: Suika.

Having petrified the entire world again to ward off Stanley’s ferocious assault, Senku and friends find themselves entirely dependent on everyone’s favorite watermelon detective, who just so happens to break free in chapter 194. This was because of how she strategically placed herself under the revival fluid hooked up to the megaphone device, which was activated by an unknowing tiger. In Dr. STONE chapter 195, she’s given the monumental task of single-handedly saving the whole of humanity. 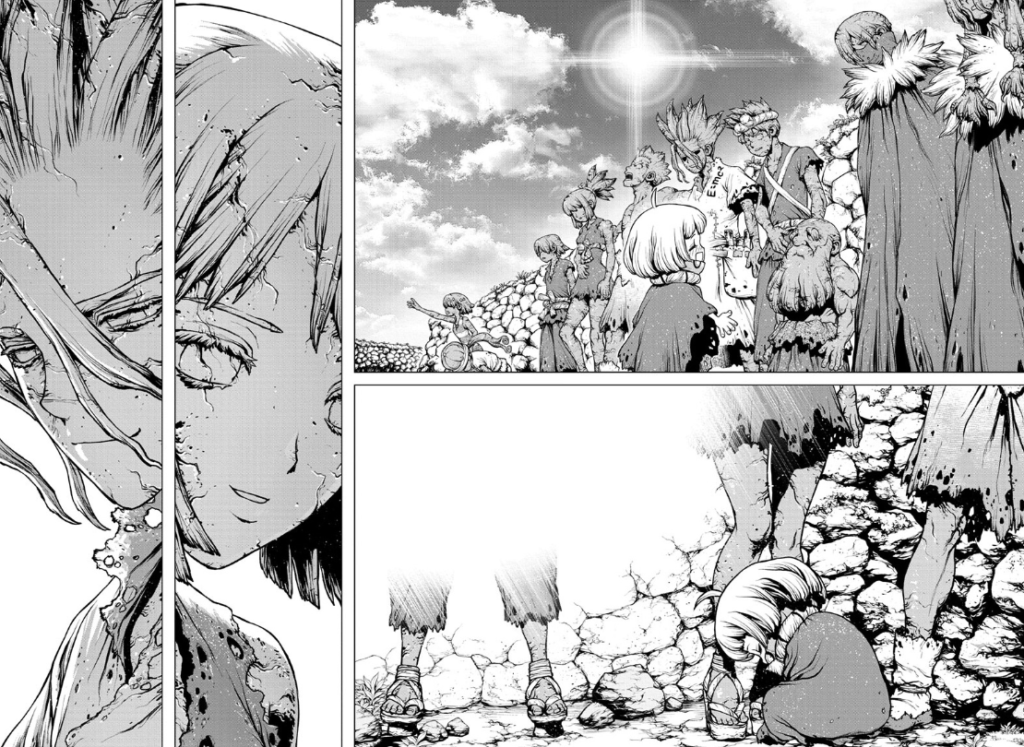 Suika’s only about eleven years old, though, provided you don’t count the three years she spent petrified between chapters 193 and 194. Expecting a child to perform this task with the immense amount of pressure on her shoulders without seeing some form of distress would be folly, hence why Suika’s quest to find more revival fluid in Dr. STONE chapter 195 is as much a battle against herself as it is against the elements.

There’s an immense amount of sadness to the scene in Dr. STONE chapter 195 where Suika lines up all the statues, imagines that they are talking to her, only to remark ‘Except, nobody’s actually talking. Suika is all alone in the world.’ Can you imagine how lonely it must feel to be the only human alive? 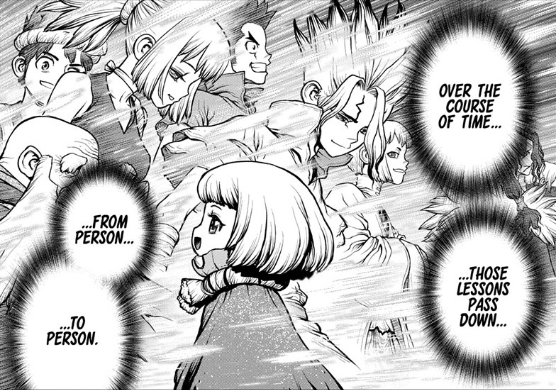 Only, Suika isn’t alone: even in petrification, the rest of the Kingdom of Science is here to help her with clues left on their person. Her hope that Chelsea and Luna might have some revival fluid is ultimately misplaced, but a map that they had with the location of some fruits is enough to make Suika realize that the ‘old paper’ that Senku had was actually the recipe for revival fluid itself. Thus, Dr. STONE chapter 195 leaves off with the exciting declaration: ‘Suika’s gonna do some science!’

In general, Dr. STONE chapter 195 underscores one of the main themes of the series: the fact that we are not alone, and that science contains within it the wisdom of previous generations. This goes against anyone who claims that there is no ‘progress’ in human society, feeding into the series’ sense of techno-optimism. And even without the philosophical element, it’s hard not to empathize with Suika’s struggles.

You can read Dr. STONE chapter 195 for free via VIZ Media.