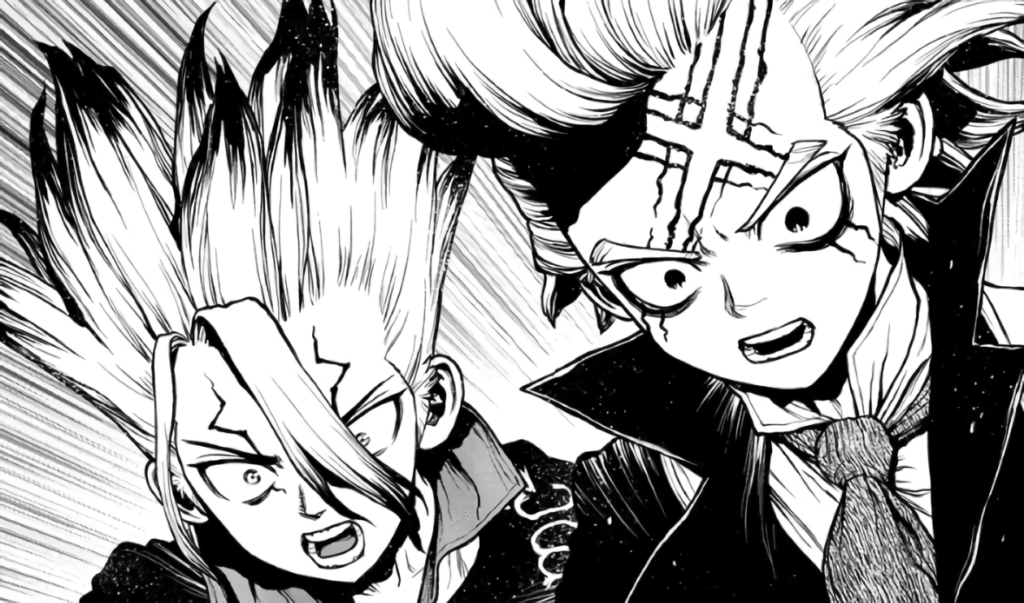 The beginning of a new week can only mean one thing: time for new Weekly Shonen Jump! This is where Jacob investigates the latest and greatest in the magazine, telling you what’s worth your time and what’s not. You can find coverage of other series under the tag Jump Time. Here’s Dr. STONE chapter 198.

What would happen if we could cure death? Would this Earth become a veritable paradise, or a living hell? That’s the question that Dr. STONE chapter 198 explores, laying the foundations for the future of the story along the way.

Last week, Chrome overheard the revelation: the Medusa petrification device can not only turn people into stone and cure their wounds but also overcome death itself. That much was confirmed when Hyoga was brought back after being filled with bullets by Stanley’s men, but is this a good thing? Should humanity really have access to such technology?

Tsukasa doesn’t think so. Once he, Senku, and Taiju set about reviving Xeno to help with the spaceship project in Dr. STONE chapter 198 (more on that later), he remarks that ‘living forever may be a fate worse than death.’ Traces of his anarcho-primitivism come back when he talks about overpopulation and the lack of resources, but he does have a point: we have a finite planet. How would it cope with eternal life? 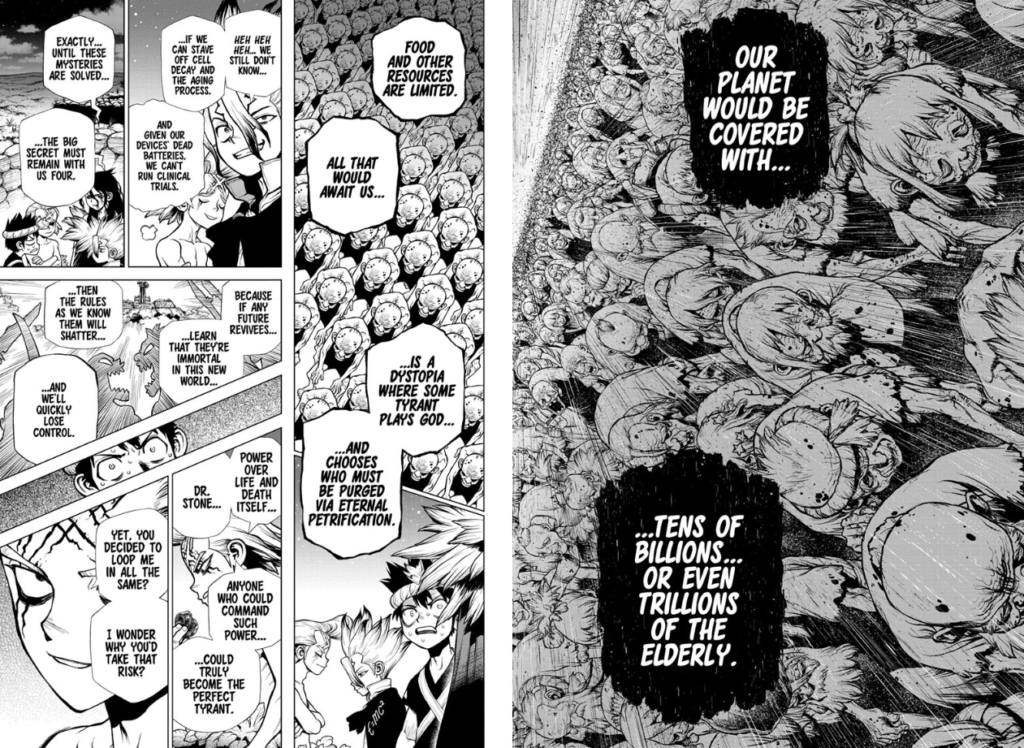 For now, the secret of the stone is left with the aforementioned four characters. Gen may have also possibly overheard the conversation as well. No doubt we’ll see it pop up again sometime in the future, but the main focus of Dr. STONE chapter 198 is ultimately to get the spaceship project up and running.

Their aim? Journey to the moon and discover the true identity of Whyman.

Ever since Xeno was properly introduced back in chapter 156, it was fairly obvious that he was going to be instrumental in the objective of going into outer space. He used to work for NASA, after all, but this begs the question: how will Senku persuade him to cooperate?

Putting aside the fact that they just waged a war in which several of their friends nearly died and the whole of humanity was petrified for the second time, it’s ultimately a matter of pride. Senku hands Xeno the earpiece communication device in Dr. STONE chapter 198 that they found on Treasure Island to show him that, ever since the second mass petrification event happened, Whyman’s global message has stopped broadcasting. His aim therefore appears to be to petrify everyone as long as there are humans alive on Earth, meaning that they are all cages in his ‘stony prison.’

Unlike Tsukasa, Xeno’s disarmament is a question of pride, not ideological epiphany: he ultimately doesn’t want to live at the whims of Whyman when he regards himself as the most competent ruler of humanity. Plus, there’s the chance of teaming up with the brilliant Japanese kid that he once helped mentor; something which he has never been able to hide his excitement for.

Dr. STONE chapter 198 kicks off the spaceship project at long last. With Xeno on board, Senku and friends may now finally achieve their goal of uncovering the mystery behind Whyman, but several questions still remain.

What effect will the Medusa’s miraculous powers have on the rest of humanity? Should we have access to them? Can Xeno really be trusted as an ally? And is going to the moon even possible in this stone world?

Whatever the answers may be, Dr. STONE chapter 198 certainly has me excited to read more.

You can read Dr. STONE chapter 198 for free via VIZ Media.