What a huge get! Dr. STONE gets more popular by the day and we commend our friends at Anime NYC for tapping the original manga creators as guests of honor for their 2019 convention. Yes, long time Shonen Jump writer Riichiro Inagaki and Korean manga artist superstar BOICHI will be coming to the big apple this November for exclusive panels, autograph signings, and more. In conjunction with Viz Media who publishes the manga stateside, this rare con appearance will mark the manga duo’s first joint appearance. This will all be going down November 15-17 at Anime NYC in the heart New York City. 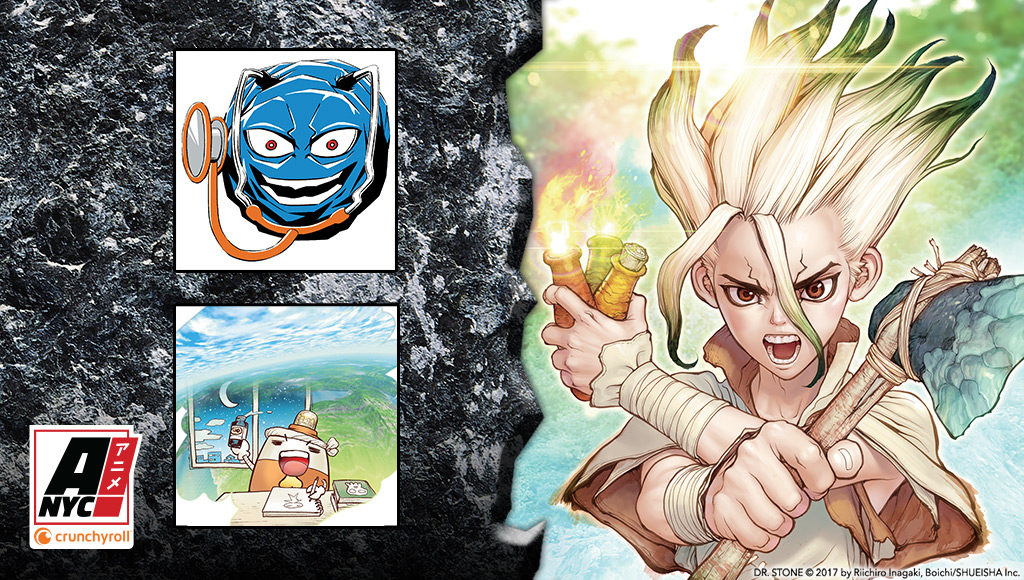 If you aren’t yet familiar with Dr. STONE, you’re missing out. It’s become one of the biggest titles running in the hallowed pages of Shonen Jump the past couple years. In a world where 99.99999999% of the population has been turned to stone, one scientifically minded boy aims to bring all of human life back to the planet. The comic, who’s anime just started airing last week, combines jungle antics, beautiful art, and science lessons! It’s a unique premise masterminded by two of the greatest manga creators currently working and getting a behind the scenes look at Anime NYC will be well worth it.

Seriously, BOICHI and Riichiro Inagaki teaming up has been a dream come true. BOICHI’s actually a Korean born artist who moved to Japan to make manga. Until now, his biggest hit to date is the incredible, beefy gangster comic Sun Ken Rock which you can legally read on CrunchyRoll. Inagaki’s most well known for writing Eyeshield 21 with One Punch Man’s Yusuke Murata illustrating. If you don’t know, it’s a particularly unique Shonen Jump manga about American Football and genuinely it’s this authors favorite Jump series of the last generation. Anime NYC bringing both of these guys out for a spell is a dream come true.

Again, you’ll be able to meet the creators of Dr. STONE at Anime NYC.