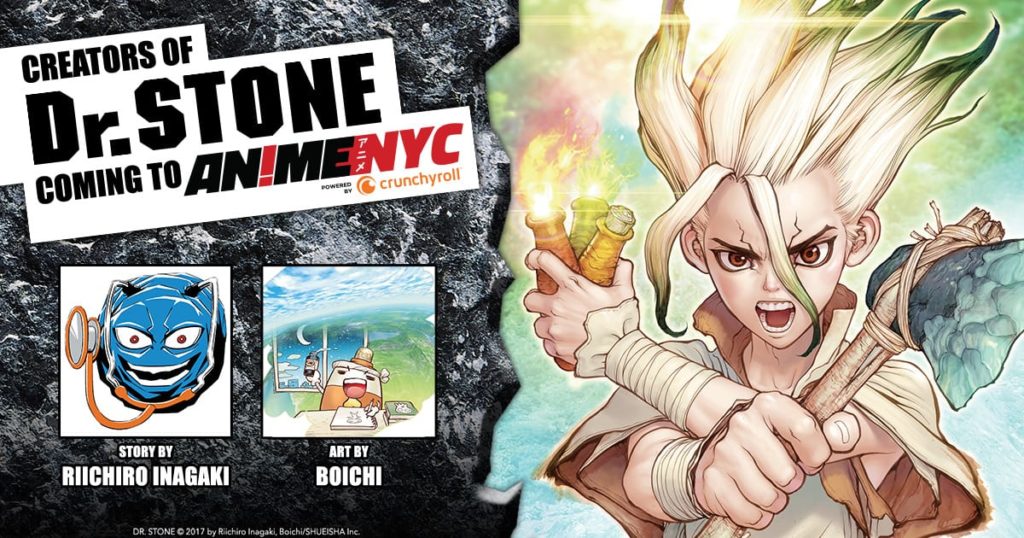 Dr. STONE creators Riichiro Inagaki and Boichi attended Anime NYC last weekend, where they made a number of panel appearances and participated in a number of signing sessions. It was during these routine convention practices, however, that Inagaki hinted at something very important – the fact that Dr. STONE might not be ending as soon as we once thought.

This bombshell came during the VIZ Media Shonen Jump panel on Friday, November 15 and was shared online by Caleb Cook, the official VIZ translator for Dr. STONE. According to Cook, Inagaki said the following in response to a fan asking whether or not Senku will ever visit the Big Apple:

“He’s caught up in this island business now, but still aiming for South America. But maybe a pitstop in North America, if he had a good reason.”

What this implies is that, contrary to popular belief, Dr. STONE won’t be ending any time soon. Not only is the journey to South America to find out the source of petrification still on the cards, but some brief escapades in North America might just be in the works as well. All I can imagine now is Senku coming across the Statue of Liberty just like in the iconic final scene of 1968’s Planet of the Apes – wouldn’t that be great?

We can probably trust Cook’s translation, given that he is an official employee of VIZ and works as a professional translator for a living. No one seems to have tried to dispute the story, either.

Therefore, I stand corrected. There have been multiple times in the past where I’ve implied that Dr. STONE might be coming to an end soon, given that the main conflict between Senku and Tsukasa has been largely solved, as well as the fact that we’re finally getting some concrete answers as to the inciting mystery of the petrification.

It is not with regret that I take this L, however. Dr. STONE has only just gotten going as a media franchise with the launch of the ongoing anime adaptation by TMS Entertainment, and its conclusion would have spelled bad news for already thinning Weekly Shonen Jump line-up. Plus, I really love the series and don’t want to see it go away any time soon.

If Senku does end up in South America before the Dr. STONE ending, then it’ll interesting to note that he’ll be the second Jump protagonist in recent memory to make his way over to the continent – Hinata from Haikyu!! recently made the big move in lieu of the series’ final arc.

Japan and South America have always had a peculiarly close relationship, particularly with regards to Brazil, so perhaps that’s the reason why? Who knows.

Thanks to Yuma Arclight for the news tip.