Shonen Jump’s Manga Series ‘Dr. STONE’ is a Masterpiece in the Making 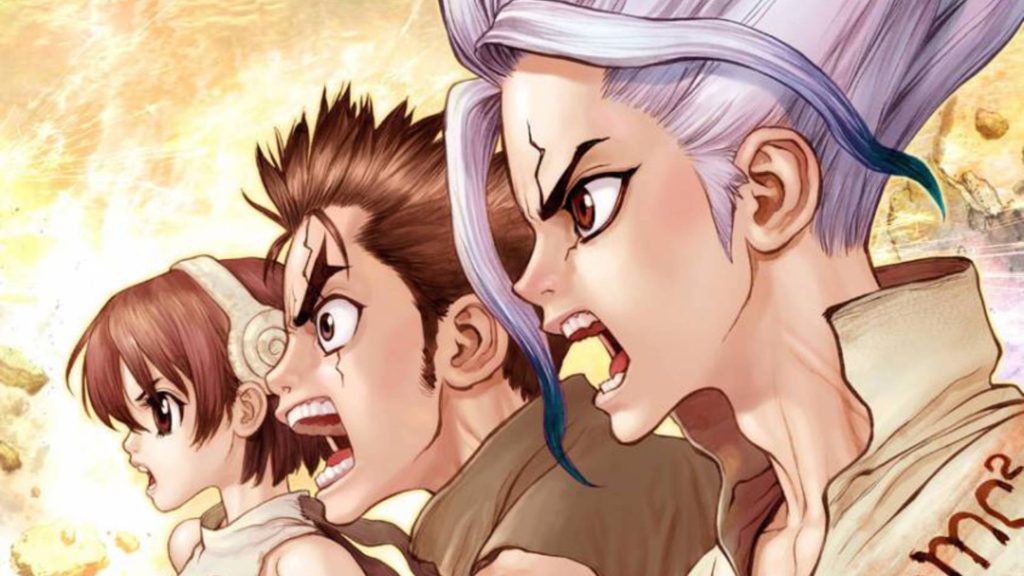 When Dr. STONE began in March of last year, I don’t think anyone expected it ever become as good as it has. I mean sure, author Riichiro Inagaki had already written the successful American football manga Eyeshield 21, but the difference in concept between it and Dr. STONE – between sports and fantasy – could not be more apparent. If Inagaki was only adept at writing sports manga, then we as readers we probably going to be in for a bad ride. Artist Boichi also had experience in writing and drawing many other series in various other magazines, but for all his prolificity, he hadn’t had a ground-breaking hit, anything that would make him a household name – at least not yet.

In its current form, Inagaki and Boichi’s co-creation Dr. STONE has the potential to become an incredibly strong series, if not one of Jump’s best. As of the time of writing, four volumes of the manga have been released and it has currently been in serialization in Weekly Shonen Jump for over a year. The story follows genius teenage scientist Senku, who is going about his business normally one day, until a catastrophe occurs, turning all of humanity into stone. Fast forward several millennia and Senku is finally able to break free of his stone body and move once more. The only problem is that nature has once more reclaimed the Earth, erasing any trace of the twenty-first century and throwing humanity back one more to the Stone Age. But Senku with his head filled with all of the scientific knowledge of the modern era refuses to accept this, setting out to rebuild modern society once more.

This bizarre premise is what originally drew me into checking out the story when it first started, and I’m sure that this was the case for many others. As crazy as the story may seem, it is merely the first sign of how inventive and imaginative the authors of this story are. Although the series does play along with many of the shonen genre’s tropes, it does so with an imagination and furious creative spirit that is rarely seen in the genre.

Despite overflowing with creativity, the authors have somehow managed to keep themselves in check and maintain good pacing – most likely due to their combined experience. The first arc is fairly uneventful, but this slow pacing allows for the reader to get a better grasp on the characters – a wise choice by the authors if they wish to continue this serialization for many years to come. Even so, the story moves along when it needs to, particularly in the second arc, where the authors avoid getting bogged down in the busywork of the characters in order to keep the tension high and the story developing. As the story now moves into a seemingly broader in scope, more battle-focused arc, I hope the authors continue to keep up this excellent pacing, which makes the story an absolute joy to read.

Not shying away from their bizarre premise either, the authors have somehow managed to make it work, turning it into something truly compelling. The premise that every human on Earth is trapped in stone gives rise to an interesting question; whether all humanity should be liberated once more, or whether we should take this opportunity to right the wrongs of humanity in the past. The series’ main antagonist, Tsukasa, argues that only the strong should be revived, as humanity has no need for the weak in the Stone Age. However morally comprehensible that may be, it certainly is an interesting conundrum that makes up the moral core of the series.

Furthermore, the science aspect of the series, embodied by our main character Senku, is executed so well that I’m honestly baffled as to how this type of story hasn’t been done before. Using his knowledge of twenty-first-century science, Senku overcomes the obstacles in his way. First, to counter Tsukasa’s raw strength, he uses the tools available to him in the stone world to create a gun. Then, once he arrives in the village, he sets about making an antibiotic to cure the village maiden. Each step in the process is explained clearly and simply, meaning that I now know (in theory) how to make an antibiotic from scratch, using only the simple tools of the Stone Age. The authors have only managed to make this work because of their evident passion for science, which allows them to present the scientific process in interesting and engaging ways, but also because author Inagaki’s writing, in general, is excellent.

The slow evolution and improvement of the series over time is yet another testament to Inagaki’s skill. At the beginning, the scope of the series was small, allowing us to form connections with our main characters and establish the ideological conflict between our protagonists and antagonists. The second arc saw the series expand in scope slightly, introducing a village of characters, as well as a slightly loftier goal of creating an antibiotic. Moving into the third and current arc, the scope has enlarged further, but such a jump isn’t detrimental to the story because it has been constructed in such a controlled way. Planning, as well as how to construct stories in a way that takes advantage of the long-form, serialized format, is something an author can only learn through experience – a skill Inagaki has clearly picked up from his time on Eyeshield 21.

It’s not right that we give Inagaki all the credit, however, because Boichi’s art is also integral to the quality of the series. His paneling is consistently good, allowing the reader to easily follow the action. Although his art is more realistic than fantastical, with lots of clean lines and detail, his character designs are still very unique and always interesting – take Senku’s unusual hairstyle, for one. This means that, even in a hectic action scene, each character is immediately recognizable because of their character design. Additionally, since the writing and artwork have been split between two, I trust that we won’t have to accept a loss in quality on the art side in order to keep the story afloat either, an unfortunately common issue in Jump manga. Furthermore, Boichi marries Inagaki’s apparent passion for science with his own as he presents Senku’s discoveries in engaging, interesting ways – my favorite so far being the way he portrayed poison gas as an attractive woman, who then turns into a monstrous mound of rotting flesh, reflecting the deadly nature of sulfur dioxide.

With all this praise, however, it would be inaccurate of me to omit the glaring flaw of the series so far, which is clearly the first arc. Initially, the focus of the story is on brawn-over-brains Taiju, whose character is as stereotypical as it is grating. In addition, some have complained about the slow pacing of the first arc, which I don’t view as a problem but may put some off from reading the rest of the series. Furthermore, several events at the beginning of the story weren’t handled as well as they could’ve been, particularly the ‘death’ of a certain character. That being said, the later developments of the story far outweigh the early downsides of the first arc, developments which I can also forgive as the duo were finding their feet both in the magazine but also in cooperating with each other.

Overall, Dr. STONE is one of my favorite series in Jump right now. I’m always excited to see where the story goes next, and it has consistently entertained me ever since I decided to pick it up all the way back in March of last year. As the series moves forward, into larger horizons, I have no doubt that it will continue to grow in quality and – hopefully – popularity.

You can find out more about Dr. STONE here (Japanese). VIZ Media is also translating the series in their English version of Weekly Shonen Jump, with further details available here.