New ‘Dr. STONE Reboot: Byakuya’ Spinoff: Back to the Past, Forward to the Future

As if we didn’t have enough Dr. STONE goodness between the exciting developments in Riichiro Inagaki and Boichi’s original manga and TMS Entertainment’s currently airing anime adaptation, Weekly Shonen Jump have just launched a new Dr. STONE spinoff manga entitled Dr. STONE Reboot: Byakuya – chapter 1 of which is currently available to read for free via VIZ Media’s Shonen Jump service. This Boichi-produced side story takes us not only back to the past, but also shows off what could be a bright future for the Dr. STONE franchise as a whole.

Dr. STONE Reboot: Byakuya Chapter 1 – Back to the Past

But first, let’s recap what happens in chapter 1 of Dr. STONE Reboot: Byakuya.

The chapter starts off with some much-needed father-son time between Byakuya and Senku, as Byakuya tries to impress his curt, unimpressionable adoptive son with a robot that he put together for his imminent voyage into space to work as part of the International Space Station (ISS) crew. 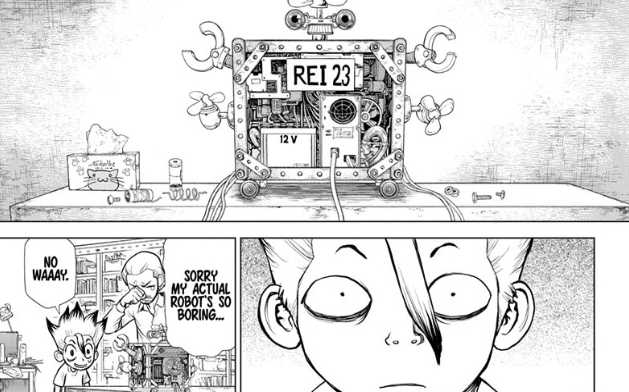 Of course, the original Dr. STONE manga already covered the majority of what happened to the ISS crew once the petrification event occurred, so it’s quite understandable why Boichi isn’t very interested in covering old ground in chapter 1. He positively races through the crew’s character introductions and the establishment of their interpersonal relationships, ending with their decision to land off the shore of Japan. 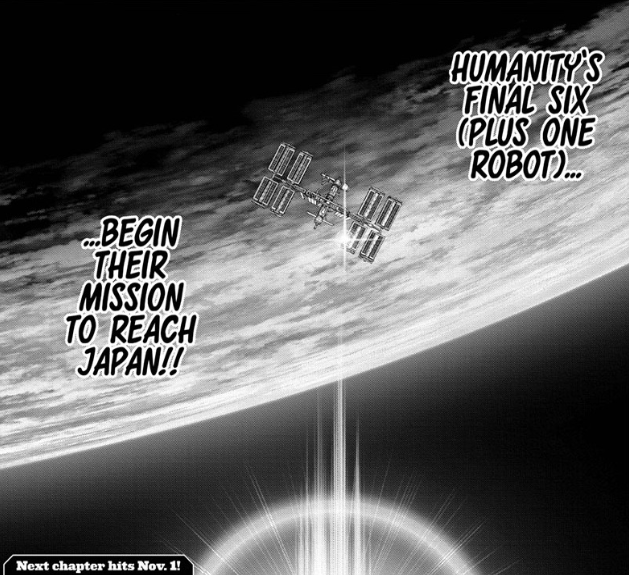 That’s not to say, however, that there’s nothing new here that’s worth checking out. Boichi, who is writing and drawing Dr. STONE Reboot: Byakuya without the help of Riichiro Inagaki, takes inspiration from the screenplays for episodes 16 and 17 of the Dr. STONE anime and adds in few embellishing details here and there, such as Lilian’s assertion that Senku is the ‘ultimate tech resource.’ Oh, and there’s also a new robot mascot that looks very much like Boichi’s own self-insert character. 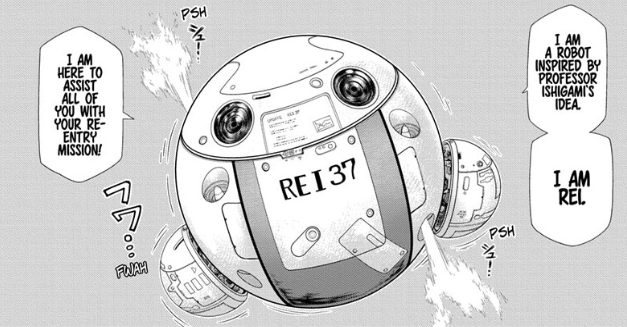 Towards the Future of Dr. STONE

Yet, it’s quite clear from chapter 1 of Dr. STONE Reboot: Byakuya that Boichi isn’t just interested in giving us the backstory of the ISS astronauts. Rather, this Dr. STONE spinoff seems more decisively orientated towards the future – sending out feelers to gauge the prospects of a Dr. STONE media franchise beyond the original manga.

This is because the original manga, which is being serialized in Weekly Shonen Jump alongside its own spinoff, is rapidly barrelling towards a conclusion that would see it tie up the majority of the narrative threads that have been dangling in front of readers since the very beginning.

Choosing Byakuya to head up this Dr. STONE spinoff, in turn, was a smart move. Byakuya chapters always tend to do well with fans, and I’m sure that there are many who would join me in saying that the ISS astronaut origin story ranks among some of the best moments in an already compelling series. 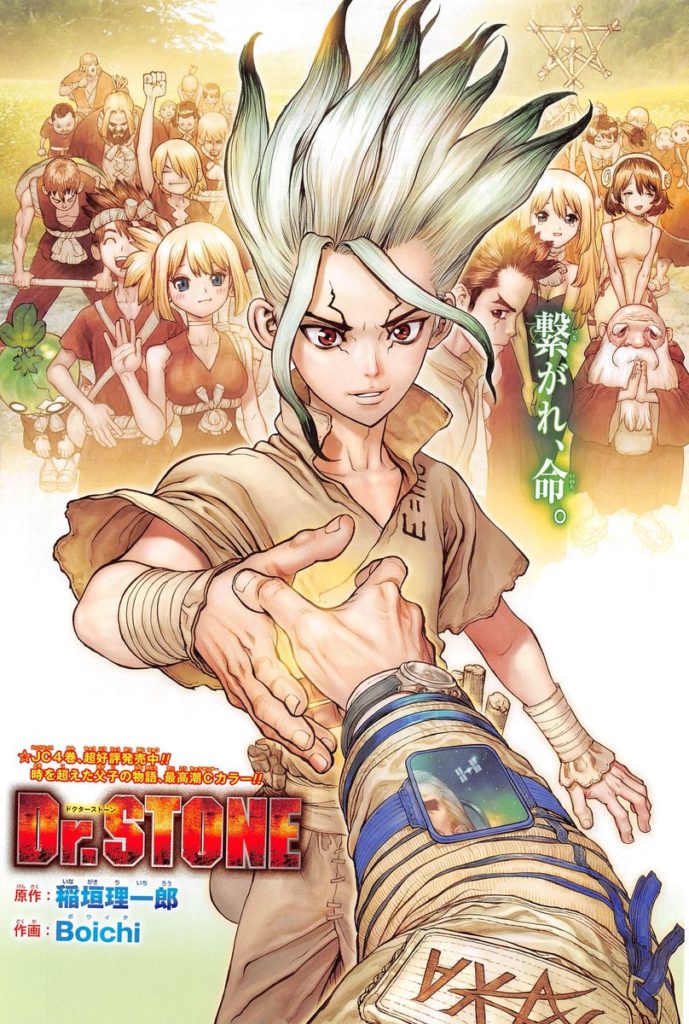 Of course, we mustn’t also forget that TMS Entertainment’s currently airing Dr. STONE anime has, coincidentally, just adapted this pivotal moment in the series in episodes 16 and 17. From this, it’s quite clear that Weekly Shonen Jump is hoping that some of the more enthused anime-only fans might use this spinoff as a way to jump into the original manga, thus boosting sales.

Even so, calling Dr. STONE Reboot: Byakuya a shameless cash grab would be doing it a disservice. It’s plenty entertaining on its own, and it’s hardly been a walk in the park for artist Boichi – as VIZ Media translator Caleb Cook pointed out on Twitter, Boichi produced over 50 pages of manga for this week’s issue of Weekly Shonen Jump, including three full-color illustrations. 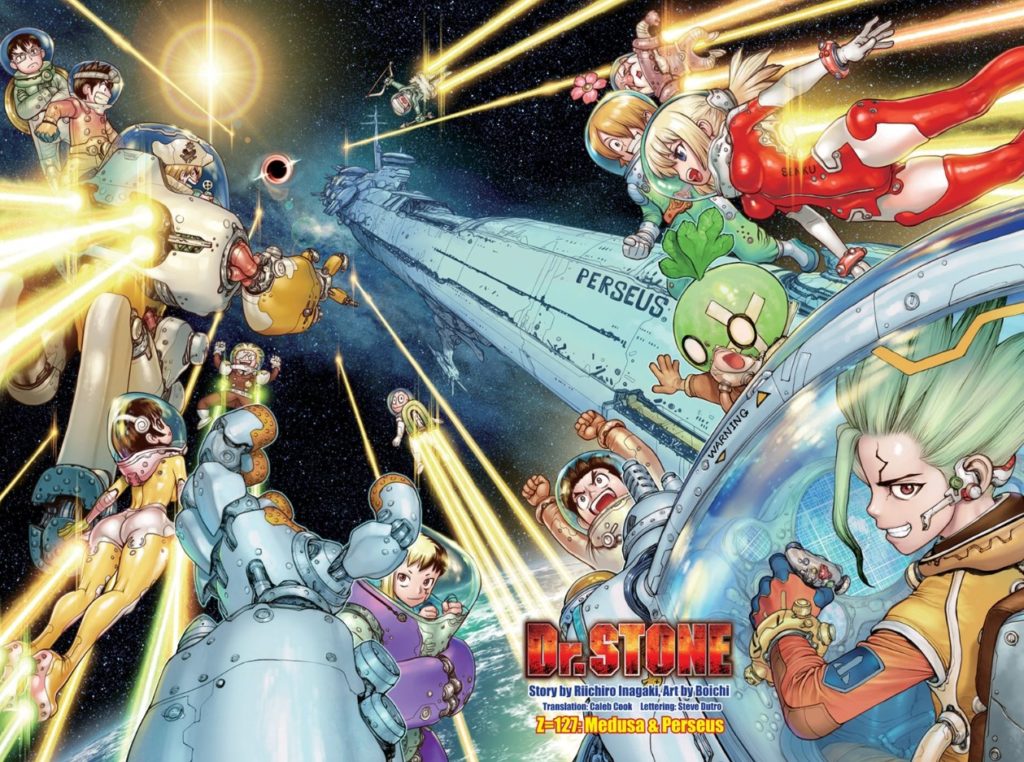 I’ve long since been vocal about my disappointment that the Dr. STONE manga might be coming to an end after only a few years, as it feels like there’s just so many more stories and so much more science to uncover, as well as the fact that its conclusion will leave a massive gaping hole in Weekly Shonen Jump’s already shaky line-up.

What’s important about Dr. STONE Reboot: Byakuya is, therefore, less the content of the spinoff itself, but what it represents. Over the course of nine chapters, I sincerely hope that Boichi can prove himself to be the competent storyteller that Sun Ken Rock and Origin fans already know he is so that the Jump editorial department might allow him to continue writing other spinoffs once the original series itself has ended proper.

The prospects for further Dr. STONE spinoffs are positively endless. We could get more origin-focused stories that happen before the main narrative, such as one focused on Tsukasa or Gen, or we could also get stories that continue the narrative of the Stone World itself, perhaps one focused on the descendants of Senku and the Kingdom of Science. Think Boruto, but exhilarating.

Dr. STONE Reboot: Byakuya chapter 1 is available to read for free now via VIZ Media’s Shonen Jump service. I’ll also be covering the spinoff as it releases over in my new column, Your Manga Week.